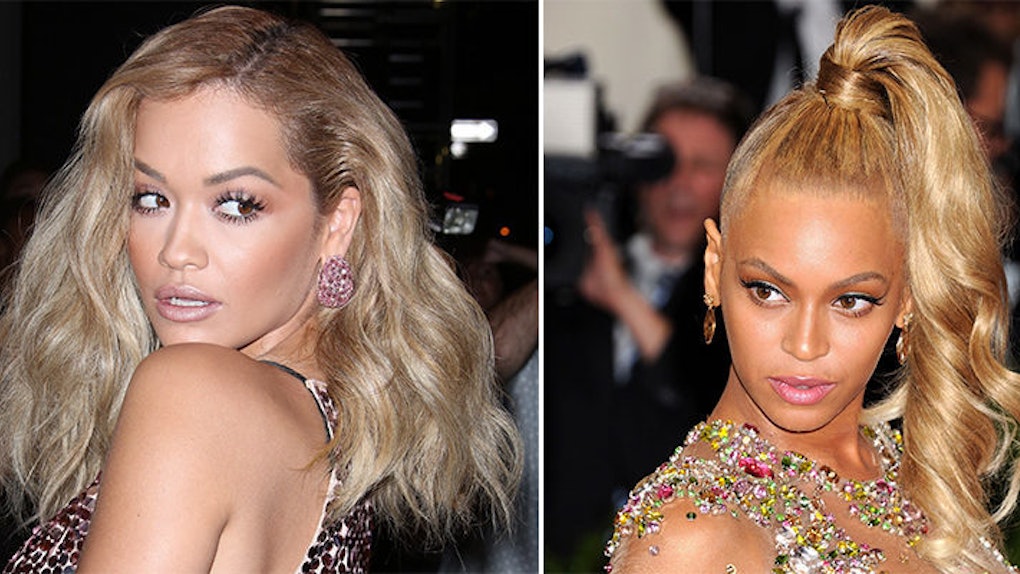 Months after everyone stopped talking about Becky With The Good Hair, Rita Ora is digging her back up to address the Beyhive's accusations she owns the alias.

In a recent interview with Vanity Fair, the new “America's Next Top Model” host opened up about the “Becky” allegations and the “Not Becky” pin she wore to a Met Ball after-party.

That [pin] was a present from Katy Perry. Maybe I was the only one seen wearing it, but there were others. As for the rest of it, I'm oblivious, I'm just not the gossip queen. I find it incredibly rude and disrespectful to women in general [when] we get accused of something that's basically against the important part — the music.

The 25-year-old insisted she has nothing but the utmost respect for the Carter family, making her an unlikely candidate for marital wedge-driver.

First and foremost, Jay Z is my inspiration and one of my idols — lyrically, musically, business-wise. I still look up to him and his wife every day. Beyoncé was one of my biggest idols growing up.

Still, she acknowledged the way romance breeds some insane behavior. The “I Will Never Let You Down” singer called love “so great” but ultimately “the most dangerous thing on planet Earth.”

I think in general I've learned my lesson to not talk about relationships and gossip because I've been at the center of it a few times and it's not worth it.

Citations: Rita Ora on Jay Z, Beyoncé, and Calvin Harris: “I Have Had a Few Dramas, Haven't I? (Vanity Fair)