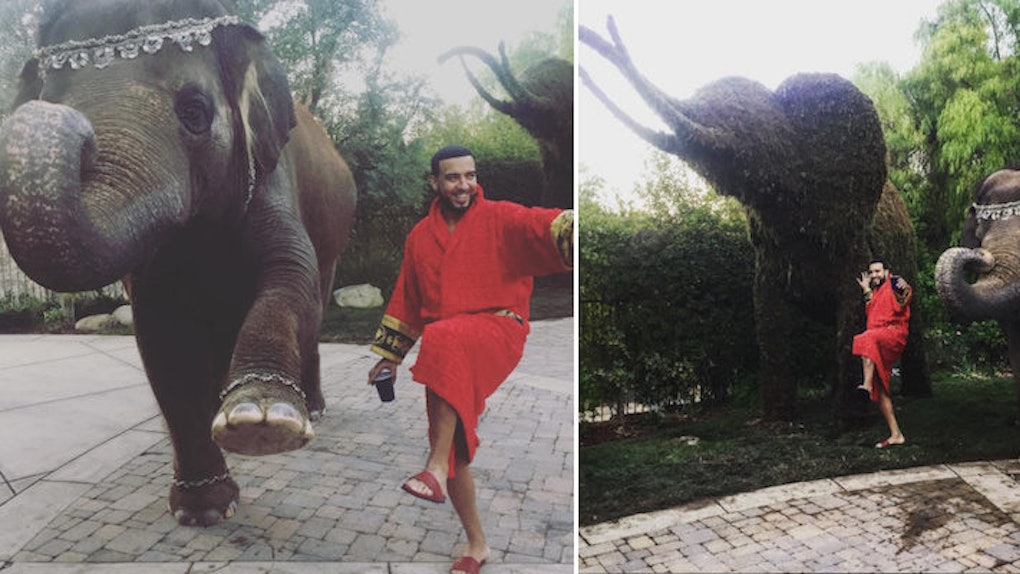 French Montana is in a big heap of elephant crap after posting some pretty exotic pictures to Instagram.

If you're wondering how much money French Montana -- a man whose name I have no idea why I know nor do I know what he does for a living -- has to burn, the answer is he has enough money to rent a bunch of elephants whenever he damn well pleases.

One of those moments came when French, who is Iggy Azalea's boyfriend supposedly, celebrated his 32nd birthday at his house.

Check out this bejeweled elephant French rented because THAT'S THE KIND OF EXTRAVAGANT CRAP YOU GET TO DO WHEN IGGY AZALEA IS YOUR GIRLFRIEND.

From now on, all birthday parties that don't have a diamond-encrusted real-life elephant are absolute shit to me.

Even Iggy got to spend some time with pimp'd out Dumbo.

Yup, it was a really nice day indeed.

It appears as though French and Iggy's followers are not on board with their choice to parade an elephant on his front yard for his birthday, though.

You don't love animals like you say, you ignorant. Educate yourself, I believe you can, you have the resources to do it.

If you proclaim that you love animals so much, why would you support the torturing they endure for your amusement?

It doesn't seem to be slowing down either. One other follower commented,

They torture the elephants from a young age to discipline them into performing and performing tricks on command. Please don't support this!

Iggy is getting her fair share of hate from the elephant photo op, too.

One of her followers commented,

Not cool. An elephant is not a prop. God knows what it has suffered in order to be 'domestic' enough to wear jewelry without showing its true wild nature.

French knows about people hating on him for the elephant thing, by the way.

Citations: French Montana and Iggy Azalea Accused of Animal Cruelty After Posing With an Elephant in His Backyard (Entertainment Tonight)