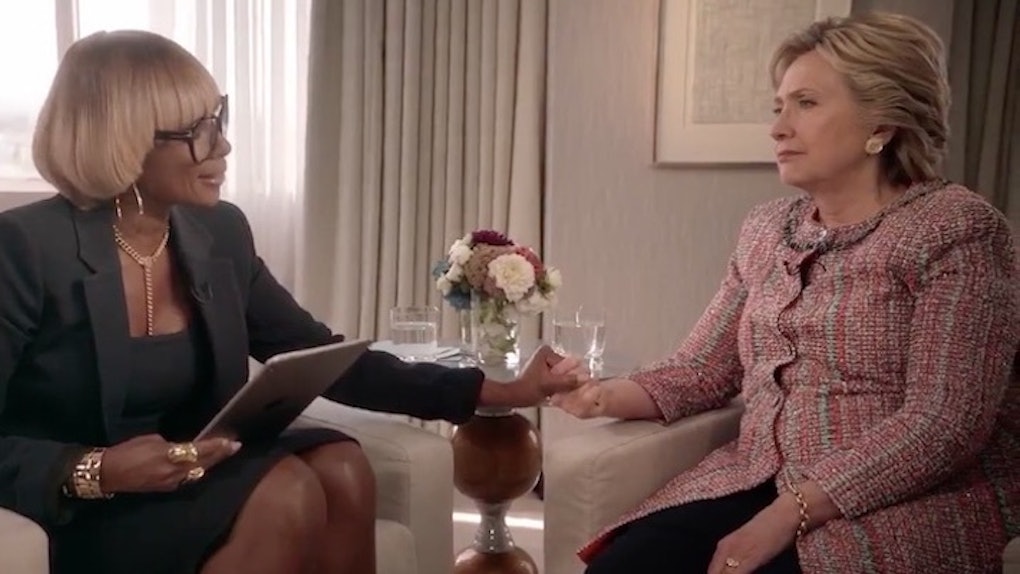 The 2016 Presidential Election has been very, very strange.

So I won't say this video of Mary J Blige serenading Hillary Clinton is the WEIRDEST thing I've seen since the primaries, but I will say it is pretty dang weird.

The morning after Hillary Clinton and Donald Trump went head to head in the first presidential debate on Monday night, Apple Music released a one-minute teaser for an upcoming interview with Hillary and singer Mary J Blige.

And it's... weird. Just watch and you'll see what I mean.

So... yeah. That was really awkward.

Hillary Clinton sits there silently for a full minute while Mary sings Bruce Springsteen's "American Skin," a song about police brutality, a cappella.

Here are some of the lyrics:

If an officer stops you / Always be polite / And never, ever run away / Promise mama you'll keep your hands inside / Is it a gun ? / Is it knife? / Is it a wallet? / This is your life.

The text on the video advertises a "one on one" and "intimate conversation" with the presidential candidate, called "The 411 with Mary J Blige," coming on September 30.

So...is that a new series that Mary J Blige is launching?

I HAVE SO MANY QUESTIONS.

Honestly, this whole thing is too awkward and weird for the internet not to rip it apart mercilessly, so that's exactly what happened.

What was the thought process behind the creative team of this video?

Will we ever recover?

Did it even really happen?

I seriously cannot wait for this interview.

So yeah, no one else knows what the heck is going on with this interview/one-on-one concert either.

I guess we'll have to tune into Apple Music on September 30 for some answers.

Citations: People Are So Confused By This Mary J. Blige And Hillary Clinton Interview (BuzzFeed)