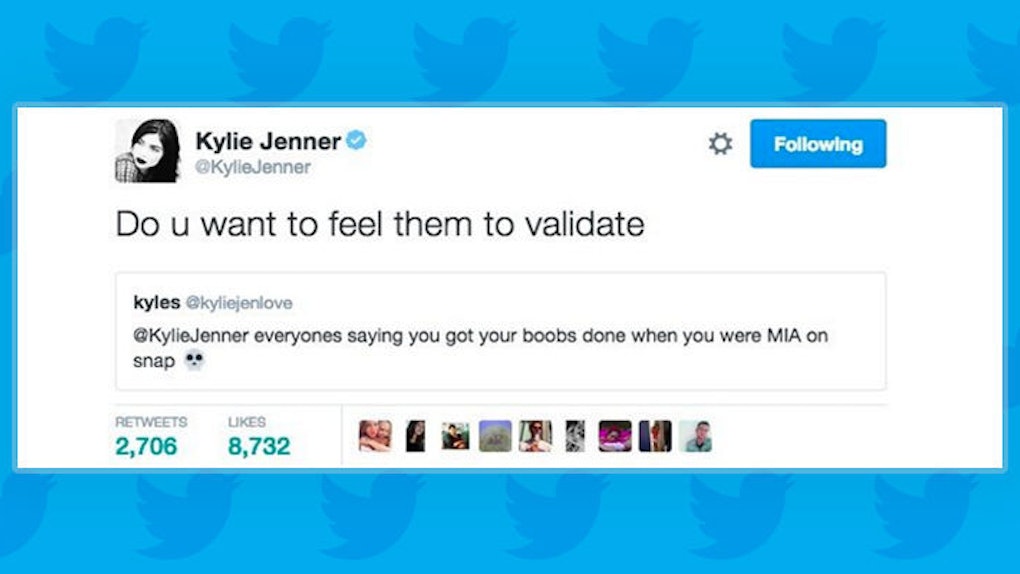 Kylie Jenner wants to make one thing clear: She did NOT get a boob job.

After the 19-year-old reality star uploaded a series of Snapchats the other day, her tatas pretty much broke the internet.

People couldn't stop talking about them. Fans were obsessing. Millions of people tweeted at Kylie asking if she got work done on her breasts.

Kylie Jenner immediately called out fans to clarify she didn't get a boob job.

According to the star, the girls looked extra plump because she's on her period. Silly hormones!

But then things got a little PG-13. To prove her boobies are all na-tur-al, she offered a fan to feel her up.

WHAT. IS. HAPPENING?! Can you guys get a room!

After hardcore flirting with a fan, Kylie told followers her secret weapon is the Bombshell bra from Victoria's Secret.

She also said her boobies won't stay this big for long. Sorry, everyone!

OH, AND SHE WASN'T EVEN WEARING A BRA. WTF, my period doesn't do that to me.

Yo girl, can we trade cycles?!

Shout out to the lucky fan who flirted with Kylie on the internet. You da real MVP of this story.