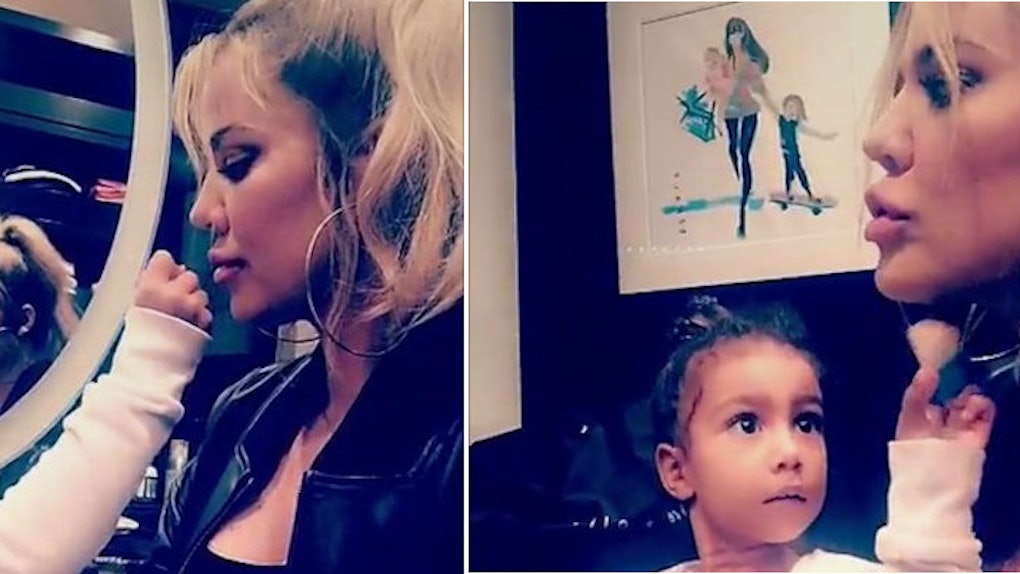 If you thought North West's life couldn't get any (more) better than yours, think again: Homegirl just landed a sweet makeup artist gig.

On Wednesday, Khloé Kardasahian gave her 3-year-old niece one of the most respected symbols of power in the Kardashian family: the makeup brush.

Yep, this peaceful transition of power was all documented on Snapchat, and no shade to our government, but it was a lot more adorable than what Obama and Trump have going on.

North started the job off by sponging some foundation onto Khloé's chin and nose.

As you can see by the look on her face, North takes her work very, very seriously.

She's undoubtedly looking for that promotion.

Next up, the lips. Things started off very professional...

...but then North messed up big time when she caught Khloé's chin with the gloss.

Dammit! Rookie mistake, North! And on your first day, too!

Khloé immediately recoiled and voiced a verbal complaint at the quality of service she was getting.

"On my chin? What is wrong with you?"

North tried to play it cool, by adding a layer of sparkles to the gloss.

Hey, everyone makes mistakes! A true professional doesn't get bogged down by them, just keeps doing her job.

But then she went too far with her career-ending blunder: sparkles on the chest.

North tried to defend her actions by claiming it was "body makeup," but it's clear she did not have Khloé's consent to cross over into that territory.

There's just no excuse for an uninformed client, North.

I'm afraid it might be a few years before North works in this business again. Undoubtedly people will link this video in their Yelp reviews of her and likely take their business to someone who is not a 3-year-old toddler.

Still, in every failure there is a valuable lesson. You have to admire her effort.