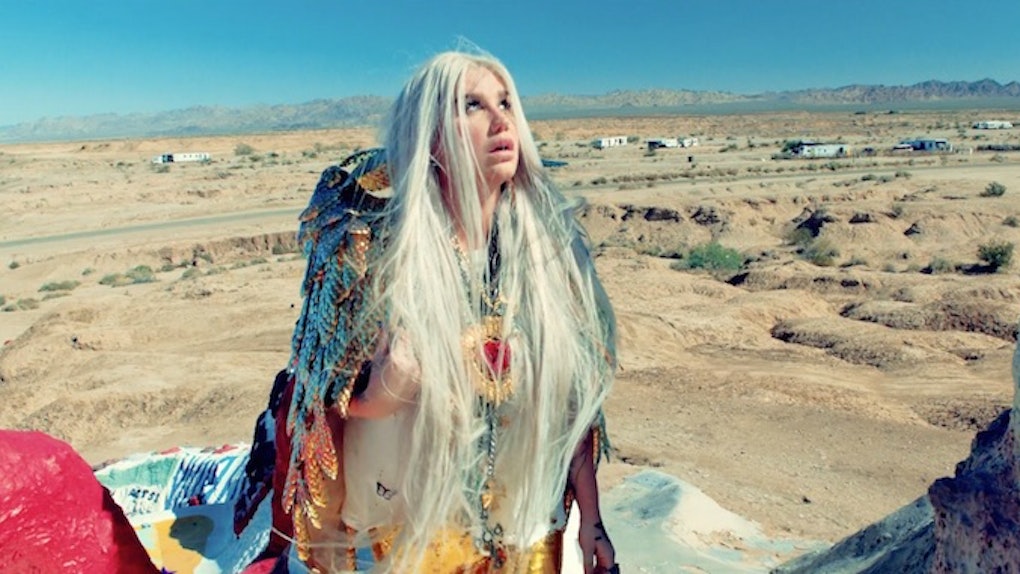 What Kesha's 'Rainbow' Means For Survivors Of Sexual Assault

The first time I heard Kesha's “Praying,” I was lying in the stale darkness of an AirBnb in Munich, Germany. It was early in the morning, earlier than usual for me, when a friend back in the states messaged me the video. As the technicolor scene unfolded in front of my eyes, I found myself completely and utterly dumbfounded. Listening to the lyrics, I looked around, as if some inanimate object in the still room could bear witness to the momentous occasion, or answer the question immediately in my mind: "How the f*ck did this happen?" I don't mean new music from Kesha. I mean, specifically, the song “Praying.” Here's what the song and Kesha's album Rainbow means for survivors of sexual assault.

Like so many other Kesha fans, I feared when she lost her now-infamous legal battle against the mega-producer Dr. Luke, that even if she were able to release music in the future, it would be a product of violence and coercion. Not only did Kesha claim in her lawsuit that the producer emotionally and verbally abused her, but cited specific instances where she claims he drugged and raped her, then threatened her and her family should she ever choose to come forward. Luke denied these claims and is now suing for defamation. And we all remember the moment Kesha sobbed in the back of the courtroom as a judge told her her requests to decimate her contact were "unreasonable."  So, stewing in the low light months later, listening to “Praying,” a song that most speculate to be about the producer himself, I needed to know how it came to be. Luke is still Kesha's manager, and thus they are still connected on a professional level thanks to the terms of her contract. So who exactly allowed this song into the world, when the world was being reminded that in the end, the allegedly abusive manager was still in control and that Kesha was still not free.

The question on many minds with the release of Kesha's third studio album is how exactly her manager is connected to and will profit from the project. This question is perhaps particularly relevant to her many fans who are also victims of sexual assault, myself included. And while this a valid concern, it's a mistake and distraction to view Dr. Luke's potential gains as at all undermining Kesha's triumphant return. Rather, we must recognize how Kesha's success is all the more breathtaking because of her legal losses, not in spite of them. And, how that success actually marks a revolution already underway concerning our country's attitude towards sexual assault.

With the release of “Praying,” it is increasingly obvious that although Kesha lost in court, Dr. Luke is nonetheless relinquishing some of his power. Luke has always said that Kesha was free to release new music, but had veto power over certain performances, also producing most of her tracks. Thus, Kesha was not truly in control of what she was releasing. A large part of the reason Rainbow and “Praying” exist in their current form is because Kesha, not Dr. Luke, was executive producer on Rainbow. Though contractually, Luke is supposed to produce six songs on every Kesha album, he forwent this stipulation. Additionally, he is no longer the CEO of Kemosabe Records; he has not been accredited on a top 10 Billboard hit since 2015; he has worked on only one song affiliated with Sony this entire year. Though the court case turned in his favor, the public has made their feelings about Luke known. Sony is responding. Luke's influence is waning. We saw this first with Kesha's Billboard performance of Bob Dylan, and now with Rainbow.

This represents a turning-of-the-tide for Kesha — and for other victims of sexual assault who were not able, for whatever reason, to achieve justice in court. In spite of Kesha's legal losses, the power dynamic is shifting. Kesha wanted to evolve as an artist and she has. She traded 808's and autotune for ballads and brass, reclaiming her power and calling out her aggressors with anthems like "Woman" and "Bastards." Kesha has more freedom within her relationship to Dr. Luke than ever before, and if he profits off her music, he does so at the expense of his own pride. Kesha is, where it counts, coming out on top. This is what I felt — no, knew — in the early hours that morning halfway across the world. And this is the real message of hope for survivors.

We live in a world where women are raped. In America, according to RAINN, one out of six women have been the victims of sexual assault and 63 percent of assaults go unreported to the police. In that Kesha took legal action (though it was a civil, not criminal, case), she is already in the minority of victims that attempt legal action to attain justice. According to RAINN, for every 1,000 cases perpetrated, only 310 are reported, and of those accused, only six will spend any time in jail. Even when the perpetrators are found guilty, sentences are often insultingly lenient. Brock Turner, the Stanford student convicted of sexual assault, served three months; my own assailant received four (and this only after another one of his victims, a woman braver than myself, came forward). Our country's power structures fail victims time and again -- just look at our president.

Most likely, the justice system isn't going to save us. It is more than likely that, for the 18 million American women who have been victims of assault, we will have to continue to face our perpetrators. We will have to find a way to survive and resurrect our dignity and self-worth without the aid of any court of law, just as Kesha has had to do. And through it, she made something beautiful. This is what makes her a truly modern icon. An honest and much-needed representation of feminine strength growing in the face of adversity. Of hard-earned wins when the powers that be suppose they have already determined fate. The rejection of that fate, and subsequent rise to greatness, reveals Kesha as something incredible: A Mother. F*cking. Woman.

But Kesha is not every woman. We live in a country where the existing power structures protect those that already hold the power: the wealthy and the white. Kesha is both of these things, and was still unsuccessful in her legal plight. So what can those of us with less cultural sway hope to learn from her story? What is the significance of Kesha's story to the rest of the survivors and our hopes for justice?

The point is this: Kesha has become our catalyst. Her case is the spark for a revolution — a revolution of dialogue and awareness around the climate of sexual assault. And that awareness and that dialogue is more attainable, and potentially more relevant to our everyday lives, than legal justice. The success of Rainbow — which debuted at #1 on the Billboard charts, moving 117,000 albums its first week, ushering in critical accolades and a sold-out tour -- proves that the world is primed for that conversation. In fact, Dr. Luke's role in Rainbow, or lack thereof, is proof that the revolution has already begun.

What is beautiful about Kesha — how she found a way into our hearts, and made a home there — is that she used the scope and volume of her social capital to become a de facto spokesperson against sexual assault. She brought the issue of sexual assault to our country's collective consciousness in a way that was impossible to ignore at a time when we needed it most. She stood to lose everything, and she held strong regardless. And when Sony offered her a back-door deal for her silence, she responded: “I will not take back the truth. I would rather let the truth ruin my career than lie for a monster ever again.”

My hope is that Kesha's case alleviates some pressure on survivors to seek healing only through the justice system, and that her growing popularity following her case alleviates the shame that so often keeps victims silent. My hope is that it proves the crimes perpetrated on us have no effect on our worth, or how our loved ones will perceive us. My hope is that speaking our truths as Kesha spoke hers might cement our place in society not as victims but warriors. My hope is that speaking those truths will reduce and eventually erase the stigma surrounding sexual assault. And that erasing that stigma might actually allow for the potential for empathy in our society's consciousness. And my hope is that if we are actually able to stimulate empathy on that level, this could potentially, eventually, effect the attitude within the legal system as well.

For now, the world's response to “Praying” and Rainbow demonstrates that people are hungry for our stories. Just as Adele, Lady Gaga, Taylor Swift, and others publicly supported Kesha throughout her legal struggles, we must be ready to add our voices to the conversation. Because with every discussion instigated around the issue of sexual abuse, the more permissive the environment becomes for victims that follow to speak their truth. And that is powerful. Now is the time to recognize and revel in that power. To recognize that no one needs to give it to us. Not our assailants. Not a judge or jury.

That is what will ultimately make us free: knowing that we were always free. That is what freed Kesha.