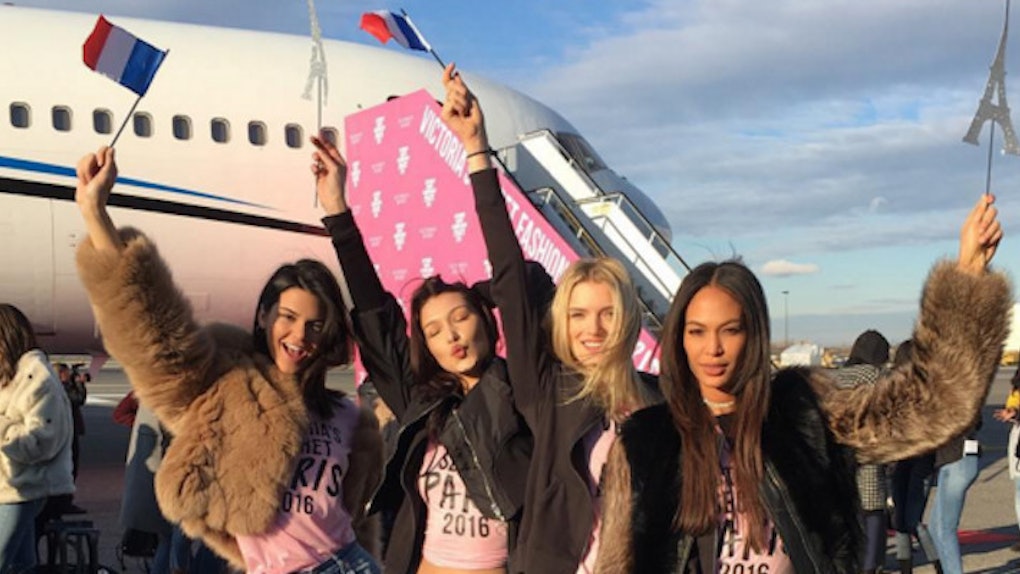 Remember when you were younger and had dreams of becoming a runway model who jetted off to exotic locations around the world with friends?

Well, Kendall Jenner's latest Instagram photo is pretty much exactly how you imagined that dream.

It shows the 21-year-old (that's right, she's only 21 and that's kinda depressing for the rest of us normal people with normal lives) outside her private jet with her Victoria's Secret model friends.

LOOK AT IT. Take in the dream you sadly haven't acquired. *Weeps behind desk of accounting firm you accidentally fell into after college*

The girls are waving French flags and mini Eiffel Towers.

They're leaving for the Victoria's Secret fashion show in Paris where Angels including Adriana Lima, Alessandra Ambrosio and Bella and Gigi Hadid will strut their stuff on the runway.

Look me in the eye and tell me you don't want to be on that flight. It looks like it's going to be fun x100. What do you think they do while miles-high over the Atlantic? Get drunk and have one big pillow fight in Victoria's Secret underwear? Probably. I hope so.

Yesterday, Bella Hadid shared a mirror selfie of her in underwear ahead of the show. Alongside countless emojis, she wrote,

Bella appeared in a mini campaign video where she spoke about how much she enjoys modeling for VS.

She recently opened up about body image, admitting to People she didn't mean to lose so much weight and she'd like it back in certain places.

My weight fluctuates so much. I really didn't mean to [lose weight]. Like I want boobs. I want my ass back. But it's not my fault. My weight fluctuates and so does everybody's and I think that if people are gonna judge, that's the worst you can possibly do because everybody is different.

See you on the runway!

Follow Elite Daily on Instagram (@elitedaily) and Snapchat for live updates from the Victoria's Secret fashion show in Paris.