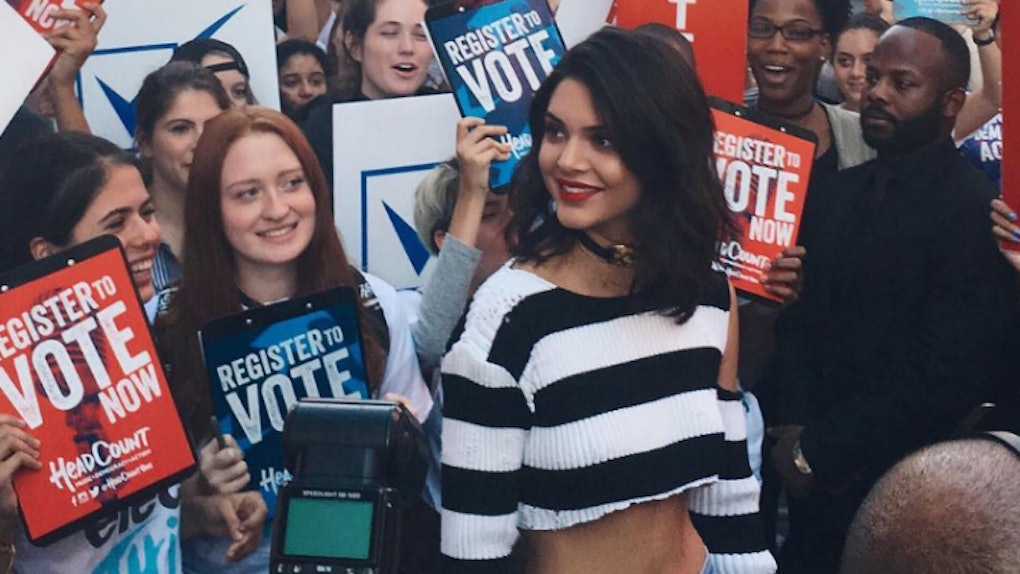 Kendall Jenner Showed Off Her Underboob At 'TRL'

Honestly, if I was promised there would be underboob present at my polling location, I would be first in line.

That is how you change America. Thank you, Kendall.

Kendall Jenner showed off a little underboob at MTV's "TRL" special, "Total Registration Live," in a bid to encourage voters to register on Tuesday.

She even told her followers she thinks voting is cute so you know I'm going to be voting now. I want Kendall Jenner to think I'm cute.

She showed off her incredibly toned abs while rocking a black and white crop top sweater at the event.

However, it was on Snapchat where things got a little PG-13! Jenner posted an upshot of her outfit with the caption "underboob is my ting."

The model and reality TV star has become a lot more vocal about "freeing the nipple" recently. She revealed on her website,

Lately, it's like I'm either braless or I have my bra out, LOL. I'm all about freeing the nipple and I just think it's cool to show off what's under your shirt -- whether that's a cute bralette or just skin.

"Total Registration Live" was filmed at the former "TRL" studio, with Ty Dolla $ign performing. Along with Kendall, Joss Wheden, Common and Vic Mensa also showed up to encourage people to register.

Jenner showed her support on Instagram earlier this year when she posted a selfie with Hillary Clinton's face. The caption read,

We wonder if more millennials will be flocking to the polls because of Jenner's noble underboob display?