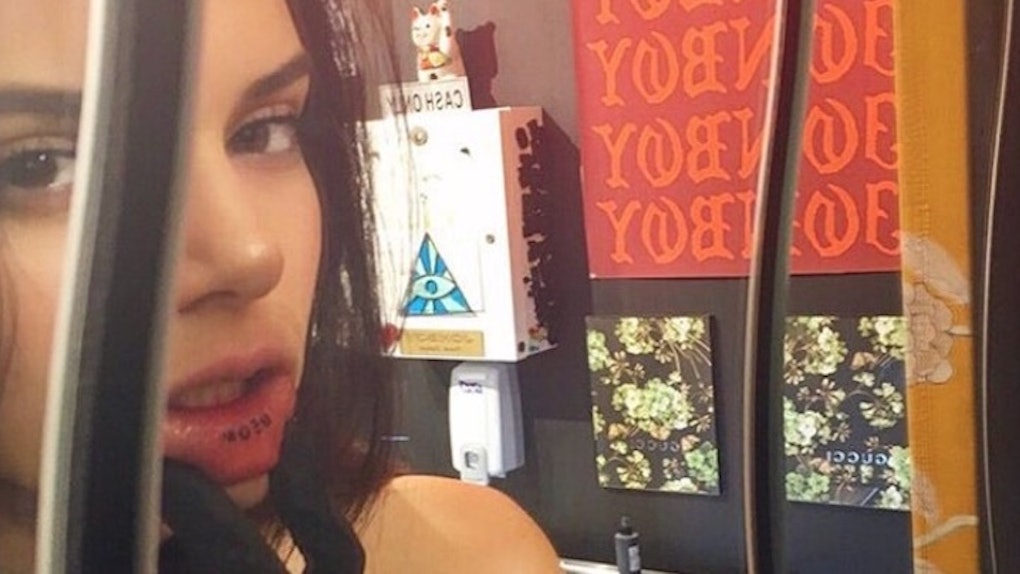 Kendall Jenner Got An Inner Lip Tattoo And It's Badass AF

The 20-year-old model got some fresh ink the other day at West 4 Tattoo in New York City.

While shooting her October cover photo for Allure magazine, Kenny revealed she got "meow" on her inner lip because she's a goddamn badass.

The word is written upside down, as you can see when Kendall pulls down her bottom lip. OOOH, SNEAKY!

The star was seen leaving tattoo artist JonBoy's studio sporting a sweatshirt and leggings. Keeping it casual, like always.

Kendall actually has a bunch of teeny tiny tats. She has a heart on the inside of her middle finger and a broken one on the other.

The models all got matching hearts to show their devotion to one another. ISN'T THAT PRECIOUS?

Yo BFFs, when are we getting our matching tats?

Man, tiny tattoos are so tasteful. If I wasn't deathly afraid of needles, I'd ink my entire body with them.

Kendall's new lip tat won't be as permanent as her finger tattoos, though. According to Kendall's rep, the "meow" has faded since getting it done.

It's pretty common for inner lip tattoos to not last as long because, you know, they're on the inside of your mouth.

According to Us Weekly, it seems like one of the first people Kendall revealed her tat to was photographer Patrick Demarchelier during the cover shoot session.

Aw, how cute. Well, Kendall totally inspired me to get an inner lip tat. Do you think they can fit "Cheeseburgers" there?