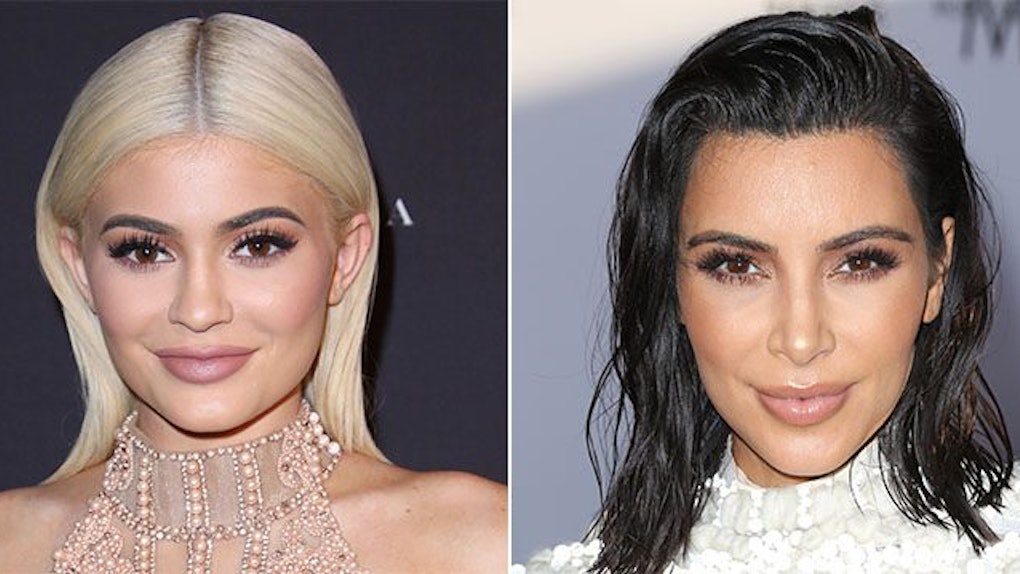 How The Kardashians Have Changed The Way We View Beauty

If you've been on Instagram lately, you've probably noticed that a lot of the beauty trends are starting to veer toward the eerily similar, Kardashian-esque look of perfection.

I mean, if you don't layer on contour and fake eyelashes to within an inch of your life, is that selfie even worth it?

Apparently, however, makeup and lighting alone are no longer enough: Even teens are reportedly trying to get that "perfect look" and indulging in noninvasive cosmetic procedures to do so.

Meanwhile, when I was 16, I knew I had my nose because my dad had it, and I had my eyes because of my mother. Me embracing my looks was a sign of respect toward my ancestors.

To me, getting plastic surgery would be like slapping grandma in the face.

Luckily, I have really supportive parents. Like, throw-a-party-for-a-participation-trophy-and-hug-me-every-day supportive.

So, I grew up being told I was beautiful, no matter what. But, I don't think that's a thing anymore.

It seems that on Instagram, everyone just wants airbrushed perfection, and Kylie Jenner is one leader of the perfection movement.

She started the plump lip craze back before the release of her now famous Lip Kits.

As agent zero of the "big fishy lips" craze, she's inspired millions of young women to want to look like her through her artful selfies, like her "hand on face" and mirror selfie.

My personal go-to has always been the staple "look away from the camera as if you didn't realize your own hand was taking the photo."

It showcases the studied nonchalance those who know me in real life understand to be entirely fake.

But more savvy teens, as well as people in their 20s and 30s, are scrambling to fight the onset of aging even before it even begins

They're just a step ahead of the game.

Many of them are taking part in ultherapy (which, despite sounding like science fiction, is essentially a focused ultrasound procedure for tightening skin) and light-based or laser therapies (which make me think of a super rad '80s disco).

The Kardashian-Jenner family has been called “the biggest influencing power force behind any concept that happens on social media,” with more than half a billion social media followers between all of them.

Apparently Kim can make up to $500,000 per sponsored Instagram post, so clearly it just makes sense to capitalize on their look.

I, of course, indulge in a minimum of 50 hashtags in a shameless but desperate attempt to get a respectable 60 likes per photo.

The point is, everyone has that feeling of not being good enough, along with the almost embarrassing need for public validation.

But, I don't think changing your face to cookie-cutter Kardashian status is the way to go.

Social media and pop culture are normalizing plastic surgery, and millennials are starting to believe that.

There are literally apps to change the shape of your nose if you don't like how you look in a photo.

stop editing ya'lls pics. what if you go missing? how you expect us to find you if you look like beyonce on facebook & chief keef in person. — She Ratchet (@SheeeRatchet) August 21, 2012

This inspires people to want what apps like Facetune show them. Celebrities are also becoming much more willing to go public about the work they've had done.

Remember when Kylie insisted she hadn't had surgery, even though her lips ballooned from non-existent to Jessica Rabbit?

Then, suddenly, she revealed the truth during an episode of "Keeping Up With The Kardashians," and she was instantly flooded with equal parts online hate and body-positive support.

Dr. Jean-Louis Sebagh, an internationally known plastic surgeon, told the LA Times he thought Kylie's lips had been “badly done, [in] my opinion."

Nevertheless, she's made quite a name for herself as the lip queen.

There's been no shortage of haters, however.

Even celebrities are feeling the pinch.

In her 2014 video for "Pretty Hurts," Beyoncé addressed this pressure and pretended to get plastic surgery.

Remember when her pre-Photoshopped photos were "leaked," and, even though she was still gorgeous, everybody lost their damn minds?

You better believe if Bey felt the pressure, then us mere mortals really really do. https://www.youtube.com/watch?v=LXXQLa-5n5w

Now, every girl is expected to have Caucasian blue eyes, full Spanish lips, a classic button nose, hairless Asian skin with a California tan, a Jamaican dance hall ass, long Swedish legs, small Japanese feet, the abs of a lesbian gym owner, the hips of a nine-year-old boy, the arms of Michelle Obama, and doll tits. The person closest to actually achieving this look is Kim Kardashian, who, as we know, was made by Russian scientists to sabotage our athletes.

Even though this isn't The Sims, we do have the ability to become whoever we want, which is simultaneously cool and totally messed up.

I may be in the minority when I say this, but I'd like to keep my funky skin and strong chin.

And honestly, if I looked like everybody else, where would all my creative angst come from?