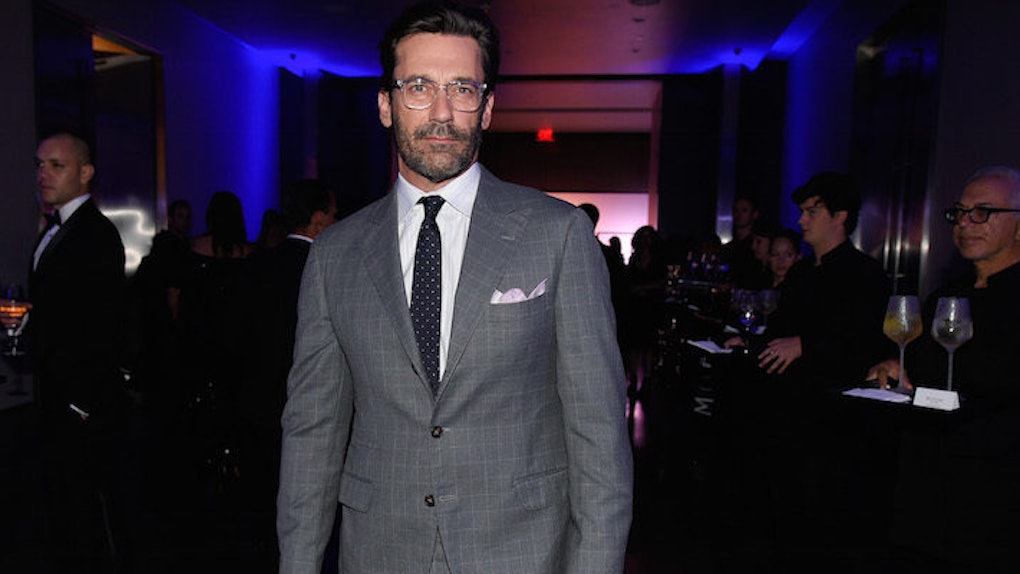 Jon Hamm has a massive wang, and he doesn't care who knows it.

The former "Mad Men" star is known for three things in Hollywood:

1) An award-winning smile. 2) A remarkably on-point sense of humor that you normally wouldn't find in classically stunning actors like himself. 3) A mythical sized penis that cannot be contained by pants.

Yup, Jon's enormous Hollywood hog is the stuff of legends, an old wive's tale that you hear of every once in a while, but assume to be just folklore.

And who's to blame you? Genitals like this simply don't exist in the wild.

"Aye, the beast was 70 cubit wide and 120 cubit tall. The yaw could fit a lake, and the sound it made could frighten even the largest army."

Jon is aware that we all know how big his wang is. He's been aware for years and honestly, he doesn't seem to care anymore.

During an interview with GQ Australia, Hamm spoke about how the world is super obsessed with his jumbo wang, casually telling the reporter,

It was a topic of fascination for other people, certainly not me. By the way, as rumors go, not the worst.

He hasn't always been this cool about people referencing his pants cannon. In an interview with Rolling Stone in 2013, he was less open about the prospect of millions of people talking about his pool noodle.

They're called 'privates' for a reason. I'm wearing pants, for fuck's sake. Lay off.

The public talking about his peen isn't even the worst part of repping a beautiful monster wang. Supposedly, it was even a problem on set.

An inside source once told The Daily News,

Jon's impressive anatomy is so distracting that they politely insisted on underwear.

Is Jon Hamm's enormous penis too enormous? Can something like this actually be too good of a thing?

Citations: Jon Hamm Isnt All That Bothered by Interest in His Hammaconda Anymore As Rumors Go Not the Worst (US)