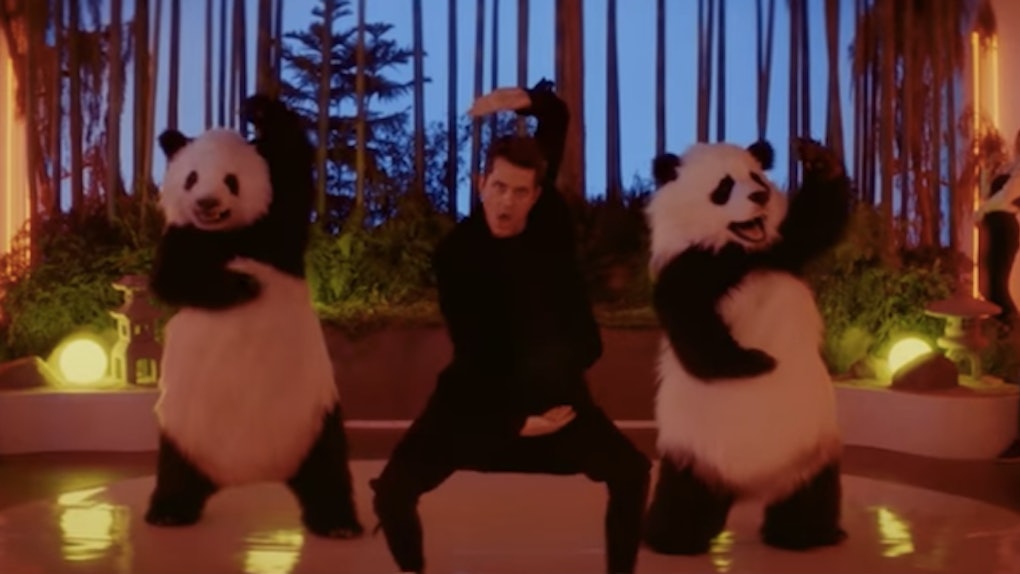 Welp, it looks like John Mayer has done it again.

The singer who was famously dinged for racism in the past is facing accusations of cultural insensitivity yet again after releasing his controversial new music video.

Between this and Kendall Jenner's Pepsi ad, it's a big day for tone-deaf racial appropriation in media!

In Mayer's new video for his single "Still Feel Like Your Man," the soft rock singer appropriates pretty much every Asian stereotype you can imagine.

He enters a room awash in red light meant to remind us of Tokyo's Red Light District, walks past a group of women dressed up in geisha robes and holding large fans, then sneers at an angry Asian mob boss and — in the video's most laughably who-approved-this moment — begins dancing with a pair of large pandas.

Just two weeks ago, John Mayer talked about this video in his profile with the New York Times, and argued he was being "as sensitive as [he] could possibly be" with this video after he faced intense backlash for racial remarks he made in 2010, when he dropped the N-word in a Playboy interview and said he only sleeps with white women because he has "a David Duke cock."

And Mayer was even aware he was walking a thin line into cultural appropriation when making the music video, which really just makes this insanely tone-deaf end product feel even worse.

He defended the video by saying he made sure to cast Asian dancers in these super-stereotypical Asian roles... although it doesn't seem clear he even actually stuck to that casting in the final cut.

He told the Times,

Part of cultural appropriation is blindness. I'm on the right side of the line because it's an idea for the video that has a very multiethnic casting, and nobody who is white or non-Asian is playing an Asian person... Do I think that someone is going to tweet that this is cultural appropriation? Yes. It's going to be interesting to see.

First of all, it's the white John Mayer, who has no Asian background, who benefits as the "savior" of the video — dipping his toes into another culture in order to rescue a memory of a past love.

It's an incredibly similar set-up as Matt Damon's white savior movie "The Great Wall," which is similarly being derided.

Mayer has admitted the yearning song is about his ex Katy Perry. Now, we know Perry is also a famous cultural appropriator who's also targeted Asian cultures — she notably dressed as a geisha for the 2013 American Music Awards.

Could Mayer have possibly been mimicking Katy's MO to get his ex's attention?

I mean... I really don't think so. But with how insane this video is, you've got to wonder what must have been going through Mayer's mind.