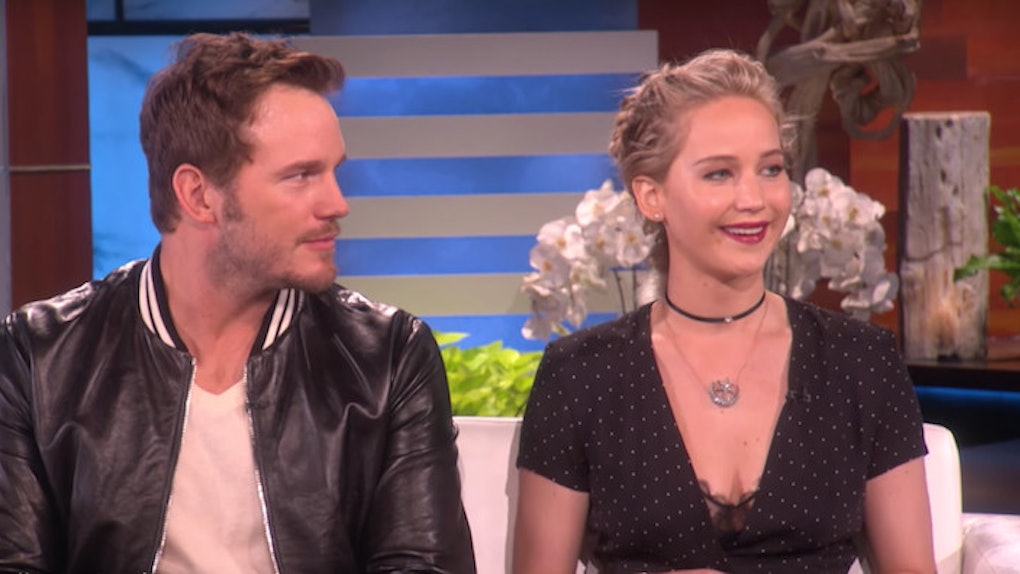 Jennifer Lawrence has crippling fears, just like you an I.

The idea of celebrities having odd personality quirks is the only thing that grounds them.

When you see some gorgeous celeb walking down a red carpet or gracing the front of a magazine, the great equalizer between the two of you is the fact you guys both probably have similar fears.

You and Brad Pitt both probably hate spiders, Mondays and the idea of dying alone.

Jennifer Lawrence is no exception to this rule.

The "Passengers" star recently stopped by the set of "The Ellen DeGeneres Show" with co-star Chris Pratt, and we learned a few things about the duo.

For starters, Chris Pratt is a pretty solid rapper, and his family is absurdly beautiful.

More importantly, though, we learned Jennifer Lawrence is a terrible worker who has a crippling fear of body harnesses robbing her of her ability to procreate.

[Chris] is much, much nicer than me. He's like a hard worker, he has a good attitude, he's very positive... He had to do basically everything. I suffer from paranoia mixed with delusions, so I thought that if I were in a harness I would never be able to bear children.

There was about a week where I was working solo. I remember hanging in this harness with this space suit that was really heavy, it was incredibly uncomfortable. I just remember saying, 'You guys better get this together because Jen is not going to do this.'

I put it on for one second and was like hell no... I mean, I had to ultimately do it, I just complained a lot.

If a fear of claustrophobia and ultimately not being able to reproduce doesn't make you think, "Man, she IS just like the rest of us," then watch the clip of her falling at the Oscars as a friendly reminder she is the most relatable person of all time.