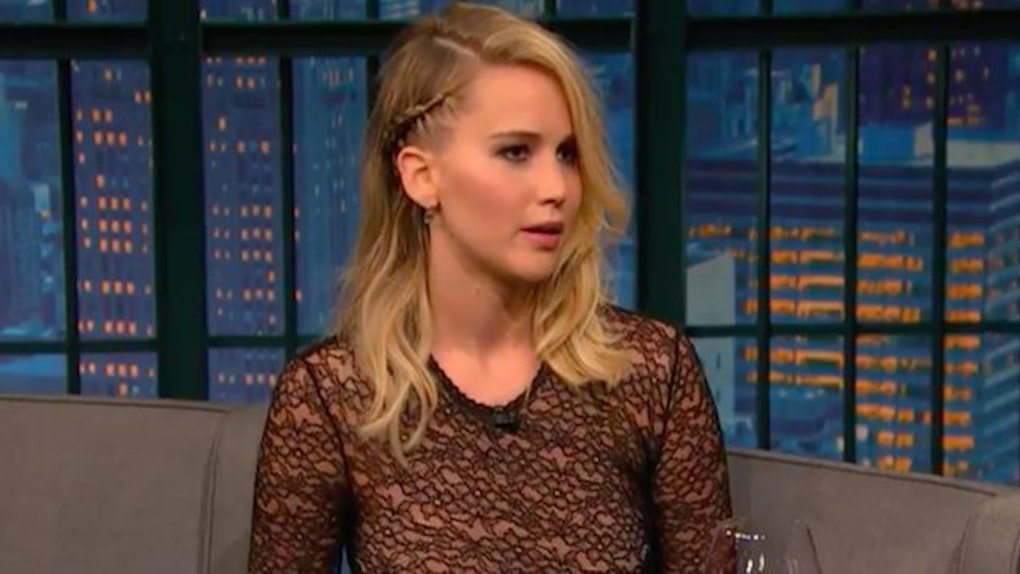 Jennifer Lawrence's talk show appearances are becoming must-watch TV, honestly. While many celebs share yawn-worthy anecdotes, J. Law delivers pretty much every time with some kind of hilarious story. The latest? Jennifer Lawrence's bar fight story, the details of which she told on Late Night With Seth Meyers.

As per usual J. Law protocol, this story didn't disappoint. During a sit down with Meyers, in which she noted she was hungover from the Mother! premiere, she brought up the time she got in a bar fight, saying, “I have another drinking story about Budapest.”

OK, she officially got my attention because, if I know anything about J. Law, the details of this are probably going to be bonkers. And I'm not wrong. The story involves a fan approaching her in a bar, asking for a selfie. She was out with friends, having a good time for “beer night” at the bar, as she joked, “I was drunk, which is rare,” adding, “This guy asked me for a selfie and I was like, 'No. Thank you. No.'”

The guy persisted, she explained: “He was like, 'Please! My girlfriend will never believe me.' My friend was like, 'If your girlfriend won't believe you then she's not The One.'"

Well played. J. Law's friends are obviously as quick with a comeback as she is.

When they told him to “just go away,” the situation escalated and the guy fired back, as Lawrence noted, “He goes, 'Yeah? F*ck you!'”

She continued, “I grabbed him, I took beers and I started dousing him, all over him." She noticed he had a suitcase with him, asked if it was his, and then poured beer all over it, too.

The situation came to abrupt halt when one of Lawrence's friends snapped her back to reality. She explained: “My friend Chris came up, grabbed me from behind and goes, 'Don't waste beer! Don't waste beer!' I instantly relaxed. I was like, 'Of course! What was I thinking?'"

When Meyers joked, "I certainly hope at some point one of that guy's friends got a picture of that,” Lawrence said one of her friends missed it entirely, saying, "My friend was in the bathroom. He came back and was like, 'Did you guys see that guy? He was all wet and crying!'"

Lawrence had spoken about the downfalls of being famous during a recent interview with the Today show, when she talked about Mother! being about the “insatiable need of humanity,” which she explained, “I think that does go hand-in-hand with fame.”

Fame shines a huge light on that part of people. We feel so entitled to everything. Like when I'm getting photographed just walking to Starbucks, I'm like, why do you feel entitled to this?... I was angry and resentful because I thought that I deserved the right to do what I love and do my job, and then still have privacy. And then after a few years you're like, but that's not the way it is, it's just not. It's important to just keep a separation and know that the people screaming outside of a premiere, they're screaming because of a job and because of a character.

She continued, “I don't put any stock in it. I'm grateful to them because without fans and people going to see my movie, I wouldn't be able to do what I love.”

All that said, Lawrence is planning a break from acting, maybe to restore some of that privacy, noting, “I don't have anything set for two years.”