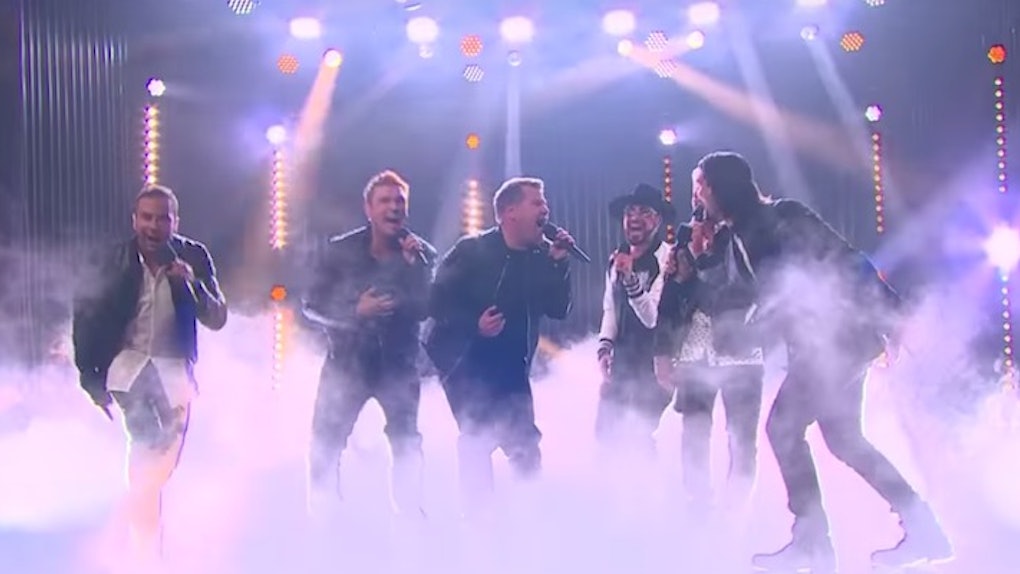 James Corden joined the Backstreet Boys for a little under two minutes last night and it was absolutely beautiful.

Backstreet is back (kinda).

The legendary boy band made headlines when they recently announced they would be pseudo-retiring by taking up a residency at The AXIS in Las Vegas' Planet Hollywood.

I say pseudo-retirement because Las Vegas has become a sort of hospice care facility for musical acts that are past their prime but have a fan base still willing to travel to Nevada to see them live. Britney did it, Celine did it, and now the guys who wanted it "that way" are doing it.

To celebrate this odd form of giving up, the band hopped onto "The Late Late Show" set to sing "Everybody (Backstreet's Back)" with their newest temporary member: James Corden.

The band surprised audiences after Corden went on a rant about how we need to bring boy bands back into the mainstream, saying,

We are bringing back boy bands. I'm talking proper boy bands. Five guys together. Im talking about the cute one, the funny one, the nice one, the other one and the maverick who refused to play by the rules all living together in some weird mansion in orlando. Now look, I'm aware that boy bands haven't gone away, right? But now they just stand on stage wearing skinny jeans and Vans sneakers and some of them, some of them, even have the audacity to pick up instruments. That is NOT what I want in a boy band. I want matching outfits, synchronized dancing and way over budget music videos.

I couldn't agree more. We need less 5 Seconds of Summer and more O-Town.

Actually, O-Town sang a song literally just called "Liquid Dreams." I take that back. We never needed that.