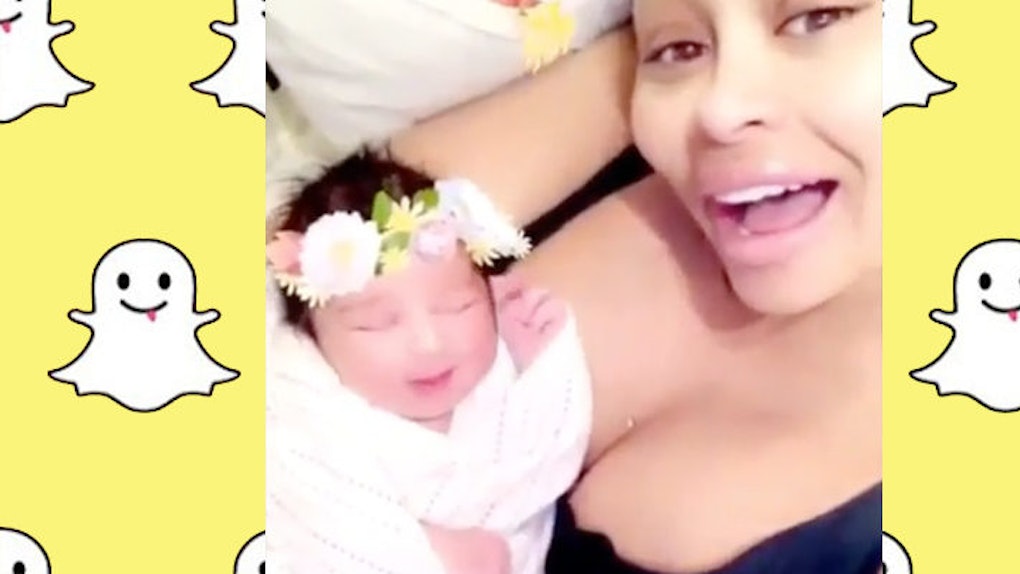 Dream Kardashian is here, y'all.

After giving birth Thursday at Cedars-Sinai Medical Center in Los Angeles, Blac Chyna introduced her newborn baby girl, Dream Renee Kardashian, to the world with an adorable Snapchat video.  As you can see in the video above, it didn't take long for Blac Chyna to post her first Snapchat selfie with daughter

Dream Kardashian, and Dream's expression is beyond adorable.

Blac Chyna put a matching flower crown on her daughter's little head, and it's so freaking cute I can barely contain myself.

Blac Chyna delivered Dream Kardashian via C-section at around 9:18 am PST, and the little bundle of joy weighed 7 pounds and 5 ounces.

Dream's dad, Rob Kardashian, appears to be in a complete state of euphoria following the birth of his daughter.

Since her birth, Rob has posted several videos and pictures on social media, one of which was a direct nod to his late father, Robert Kardashian.

Rob captioned the above photo with a tribute to his dad, writing,

She's an exact copy. Pops sent us an angel. It's truly a blessing. He's happier than anyone on this day. I'm so happy and thankful.

Rob Kardashian previously spoke with PEOPLE about wanting to be the same type of father Robert Kardashian was to him, saying,

I had a really close bond with my dad. I was only with him for 15 years. That's why I'm looking forward to having that long-term bond with my child and being funny and goofy like my dad was.

Seeing Rob Kardashian talk about the impact his father had on him and how he wants to be that kind of man for his daughter is beyond inspiring.

I genuinely believe my dad has an influence on every major decision I make, and I hope to one day be lucky enough to try to be the father he is for me.