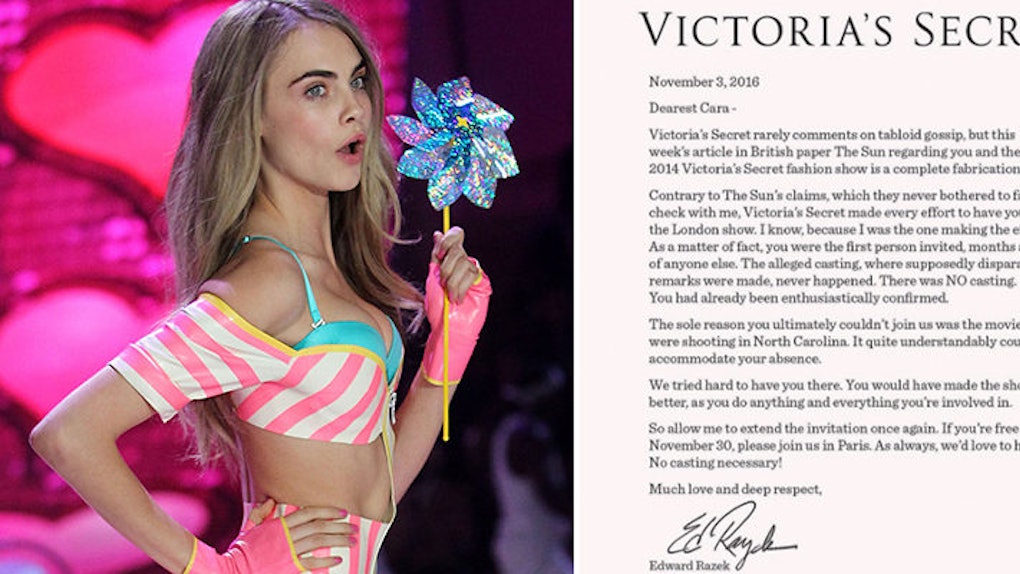 The 24-year-old model is calling out The Sun for making up a fake story claiming the Victoria's Secret Fashion Show turned her down because she was "bloated."

On October 30, The Sun posted an article stating Cara Delevingne was called "bloated" while auditioning for the show in 2014.

In response to the tabloid, Victoria's Secret CMO Edward Razek -- who is also the executive producer of the Fashion Show -- sent Cara a personal letter addressing the gossip.

In the letter, which Cara posted on Instagram, Razek explained The Sun's report was never fact checked and "a complete fabrication."

He wrote to the model,

Contrary to The Sun's claims, which they never bothered to fact check with me, Victoria's Secret made every effort to have you in the London show. I know, because I was the one making the effort. As a matter of fact, you were the first person invited, months ahead of anyone else.

Razek continued by telling Cara the entire story was completely false because there wasn't even a 2014 casting. He shared,

The alleged casting, where supposedly disparaging remarks were made, never happened. There was NO casting. You had already been enthusiastically confirmed.

The letter said Cara Delevingne was unable to join the other models at the Victoria's Secret Fashion Show in 2014 because she was shooting a movie in North Carolina.

Edward Razek concluded his response by inviting the model to walk in this year's show, "no casting necessary."

You can read the full letter below.

Cara also slammed the newspaper in the caption. She wrote,

YOU TELL 'EM, CARA. GIVE THEM A PIECE OF YOUR MIND.

Sine the post, The Sun has deleted its story... probably, you know, because it was made up.

Hopefully Cara says yes to Razek's offer so we can cheer her on as she walks her bloated belly down the runway. Eat a couple cheeseburgers before you hit the stage, girlfriend. We're on your side.