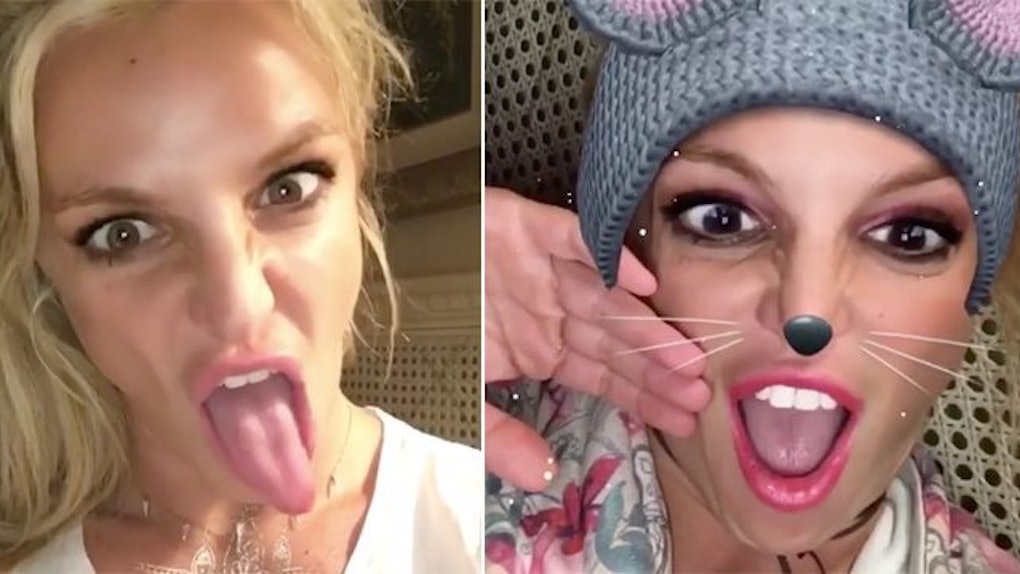 It's Britney with a dog face filter on, bitch.

If there is one thing moms love more than anything else in the world it's downloading social media apps and then knowing how to sort of use them.

I don't know what it is with moms and social media but the second they are tasked with making an upload on a new-ish platform they stop being humans and start being birds who found a camera in the wild.

Britney Spears recently out-mom'd herself by officially joining Snapchat and then uploading a few pieces of gold to her account.

The first was this silent film that deserves a place in The Criterion Collection.

The second thing was whatever this was supposed to be.

While it is unclear when Britney actually downloaded Snapchat or if in the past she's been posting clips she took to her friends' accounts, one thing is very clear: Britney. Loves. Dog. Filters.

Earlier this week, she took this video of herself doggin' it for the camera.

Then she dogged it again over here with this dude.

She took a small doggin' break to take this flower-packed shot with a friend of hers from Louisiana.

BEFORE GOING RIGHT BACK TO DOGGIN' IT!

When she's not doggin' it, she's bunnyin' it.

Honestly, if Britney wants to dog it on camera then I say let her dog it on camera. This week has not been the best week for the 35-year-old music icon, so if she finds joy from this filter then she should be allowed to use said filter.

After months of speculation and leaked photos from the set of Lifetime's Britney Spears biopic, "Britney Ever After," the network finally dropped a trailer for the movie and it predictably doesn't look like the most pro-Britney film out there.

Full warning, the trailer is as great as you think it is.

LEAVE BRITNEY ALONE -- so she can make some dog filter snaps!