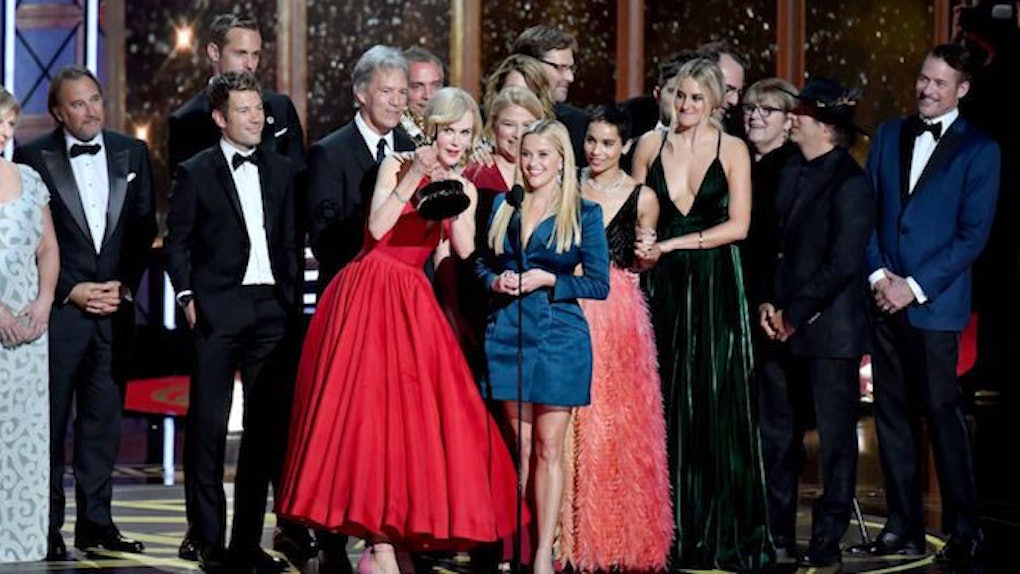 How Many Emmys Did 'Big Little Lies' Win? The HBO Hit Swept The Awards Show

Although a lot of wins is satisfying, perhaps what's even more gratifying to the actors, producers, directors, and writers is the fact that Big Little Lies told an important story.

Reese Witherspoon, who plays Madeline in the show, took her time on stage to make an important statement. During the acceptance speech, while the cast stood behind her, she preached we need to continue to,

Everyone was in support of the overwhelming feeling of girl power, and rightfully so. However, Big Little Lies took things up a notch.

During her acceptance speech, Kidman used her platform to bring awareness to a serious topic — one she hopes her daughters recognize. Kidman plays Celeste, one of the moms in the series who is abused by her husband Perry (played by Alexander Skarsgård). The real-life mom said,

Also I want them [my daughters] to know that sometimes when you're acting you get a chance to bring a bigger message — and this is their contribution and your contribution — we've shown a light on domestic abuse. It is a complicated, insidious disease. It exists far more than we allow ourselves to know.

This is certainly not the first time she acknowledged the show's graphic material.

Kidman revealed what it was like to depict the show's horrific domestic abuse scenes in an interview with W. She said,

Skarsgård was not one to shy away from the seriousness of the show, either. During the red carpet appearances CBS recorded on Facebook Live, he touched on the heavy aspects of the show and said that the first season was "a wild ride."

However, fans are willing to take another wild ride to Monterey, California.

Now that the series was a big success at the award show, people cannot wait for Season 2, though many wondered if that was likely to happen, considering what the first season covered in relation to the book's entire story. But there's good news for fans who (like Witherspoon) want more.

During the Television Critics Association's summer press tour,  HBO's programming president, Casey Bloys, claimed to have asked the author Liane Moriarty to take a crack at writing the second season, according to TV Line. Though executive producer and director Jean-Marc Vallée insisted that there was no need for a return, Bloys claimed “Nicole and Reese can be very persuasive.”