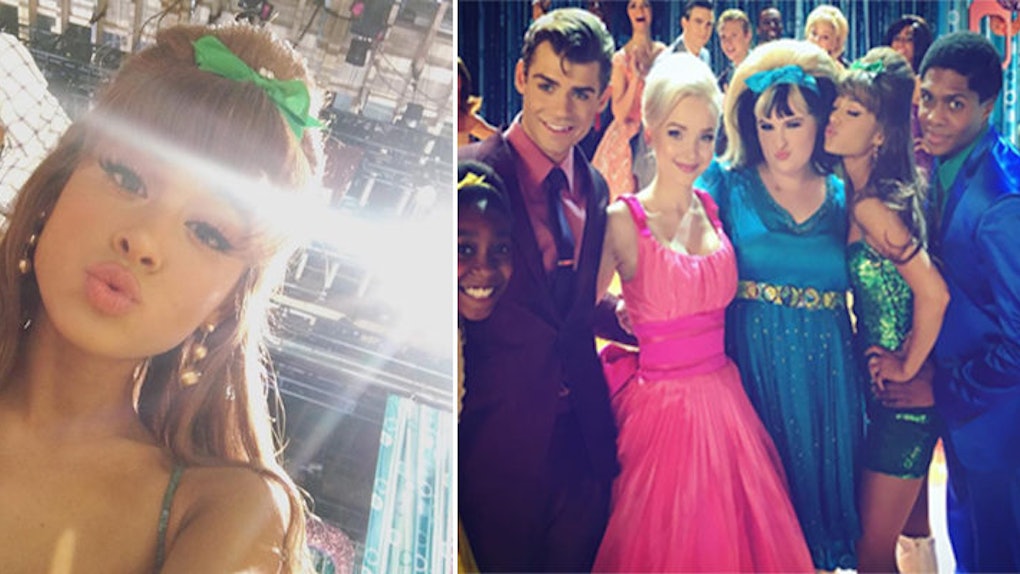 "Good morning, Baltimoreeeeee!" (And everywhere else.)

In a couple of weeks,  Ariana Grande will ditch her pony and rock pigtails as Penny Pingleton in "Hairspray Live!"

Yup, the Tony Award-winning Broadway musical is headed to NBC.

Over the weekend, the 23-year-old "Dangerous Woman" teased fans with selfies of her character in costume.

She posted pictures on Instagram of her wearing a green dress, bow and wig.

The star also added a picture with Maddie Baillio, the actress who will play the lovable Tracy Turnblad.

The show has a stacked cast including Derek Hough, Jennifer Hudson and Kristin Chenoweth as Velma Von Tussle.

Maddie Baillio also went to Instagram to share some pictures of the actors on set. HELLO LINK LARKIN, looking hot.

"Hairspray Live!" will air on NBC on December 7, so we only have a few weeks left before we travel back to the '60s and sing along with Ariana Grande and co.

The singer actually spoke to Jimmy Fallon and opened up about her excitement for the role. She shared,

I heard they were doing 'Hairspray Live!' and I had a heart attack because this has been one of my favorite musicals since I'm literally, like, 10 years old, since the original Broadway cast... and to be playing Kerry Butler's role... it's very overwhelming, but I'm very excited.

I'M SO EXCITED FOR YOU, ARIANA. I can hear the bells already. Can you?!

I'm not gonna lie -- it'll take a lot to beat "Hairspray" the movie starring Nikki Blonsky, Zac Efron and Amanda Bynes. I mean, John Travolta dressed as a woman and wore a hilarious wig, for crying out loud.

You're timeless to me, Johnny boy. #Neverforget.

Grab your dancing shoes, hairspray and headbands because we're headed to Baltimore. See you December 7!