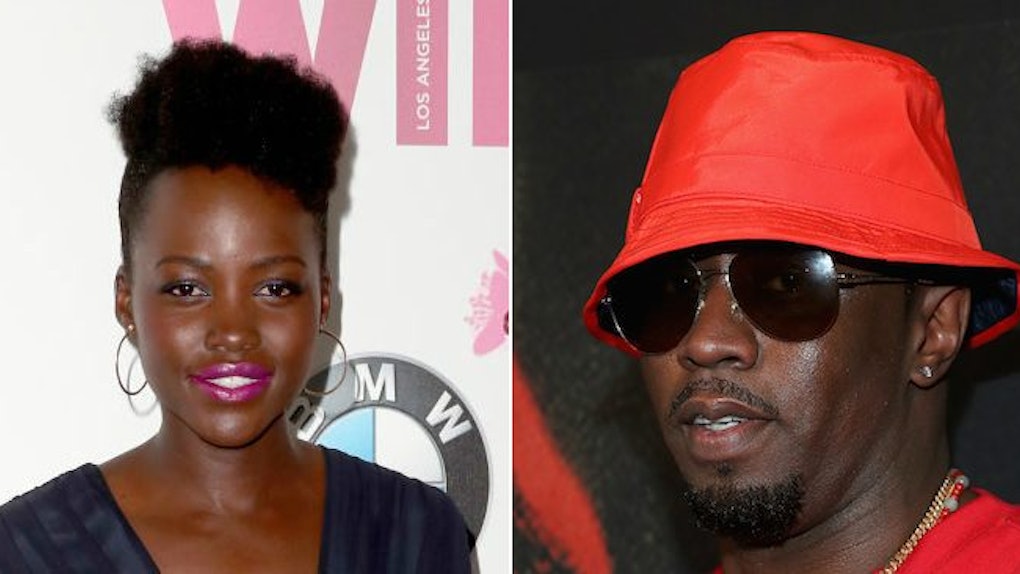 Alice In Wonderland in all black? I can't help but to be all for it!

The 2018 Pirelli calendar took on the classic Lewis Carroll story as its theme, and has selected some of your favorite black public figures to model its characters, with the iconic photographer, Tim Walker, behind the lens for the shoot.

In case you don't know, Pirelli is a manufacturing and trade company that focuses on car parts. But the annual Pirelli calendar is like the Met Gala of calendars. It is distributed in limited numbers to select individuals, including top tier celebrities.

Basically, you have to be rich or famous AF or both to snag this thing and yes, when the calendar debuts, it always offers up something valuable to talk about. The Pirelli calendar was previously known for its images of women in little or no clothes and in the last few years has begun to use its shoots to make larger statements, the New York Times reports.

The 2017 calendar featured a series of unretouched photos of famous actresses, shot by photographer Peter Lindbergh. The calendar — which included photos of Lupita Nyong'o, Nicole Kidman, and Uma Thurman — made a strong statement about about beauty standards and women not needing to look perfect to be valuable.

It looks like the 2018 calendar aims to make just as big of a splash, but with a visual conversation on race.

First of all, look at the spot-on Alice In Wonderland character lineup.

Friggin' RuPaul is the Queen of Hearts.

Naomi Campbell and Diddy are the Royal Beheaders.

From his music band reality television days to that #DiddyCrop seen 'round the world, Diddy is known for making a strong, final cut. And it only makes sense that his longtime friend and supermodel goddess, Naomi Campbell, hold an axe right alongside him, right?

Lupita Nyong'o is the Dormouse from the tea party.

Isn't she so cute? Nyong'o makes any and everything look amazing.

She's totally given the character a funkier edge, although I would argue that Diddy could have owned this too.

Ah, and with such grace!

Life seems to have come full circle for Thot, who is a South Sudanese-Australian model. She's the same woman who quit the modeling industry, due to being bullied about her dark skin and natural hair.

She's since returned to the industry and become a champion for women with dark skin and natural hair. And now she's the lead protagonist in this exclusive all-black Alice In Wonderland series. Talk about a come-up and a comeback!

The all-black 2018 Pirelli calendar is about promoting diversity.

Inclusivity is more part of the conversation than it has ever been before, but it goes far beyond black and white. It is about all creeds, all colors, all sizes and people just living their truths. A lot of this is about digital giving people voices, and a new generation who refuse to compromise and want answers to the questions that matter to them. Given the state of the world we live in, sometimes I think we all feel like we've fallen down the rabbit hole. For me, a retelling of 'Alice' for the modern world was a perfect project, particularly once the cast fell into place.

To Enninful's point, reimagining characters that have been historically white has become commonplace in our digital world.

Think about the recent playful recasting of the Hocus Pocus characters with the actresses from Hidden Figures, or the all-black Disney princess images created by the artist, @BelaTiya, on Twitter:

Black people have certainly proved to be masters at telling their own stories. Issa Rae's Insecure show and basically anythingfil project Ava DuVernay has directed are proof of that. These fantasy re-castings seem to stem from the desire of black people to also write themselves in spaces that they have not always been given access to.

Being pro-black doesn't mean a black person didn't grow up and enjoy many of the cultural parts of mainstream America. That's the nice way of writing that yes, plenty of black folks liked Alice In Wonderland and other stories with white people as the main characters.

Seeing these beloved characters played by black models and actors is just a cool way of bringing black culture to the mainstream, especially in an age when black people are scoring more authentic roles in television and film.

This calendar is basically black people showing other black people how valuable we are, even when we are not invited into a space.

It also serves as inspiration that even when you aren't offered a seat at the table, that doesn't mean you can't build your own table, pull up a chair, and indulge.

Model, Thando Hopa, who plays the Princess of Hearts, shared her experience with the New York Times that demonstrates how powerful these kinds of images can be.

When I was young, I didn't have a single role model who looked like me, who could have been a source of inspiration or motivation. I wanted to expand other people's imaginations by not letting them be restricted to specific stories or narratives. Any girl, whether she is black, white, Asian or Indian, should be able to have a sense that they, too, can be a heroine in their own fairy tale. If Alice looks differently here, then Alice can be anybody. Your value comes from far more than the narrative that someone else gives you. I hope that when the calendar goes live, people are able to see the intention behind this. It was a unifying effort.

Hip-hop legend and overall business mogul, Diddy, also expressed his excitement about the shoot and told the New York Times that he "moved mountains" to be a part of it.

He told the newspaper,

It is a chance to push social consciousness and break down barriers. For so many years, something like this would not have happened in the fashion world, so it feels like being part of history and playing an active role. I want to lead by example.

So yeah, in 2017 Alice In Wonderland can have all-black characters, even if only in photo form, and it isn't weird or disrespectful to other races.

These photos are all about celebrating the diversity and inclusion that really should have existed all along.

*Goes in search of the rabbit hole that is going to take me to this all-black Wonderland of glory.*