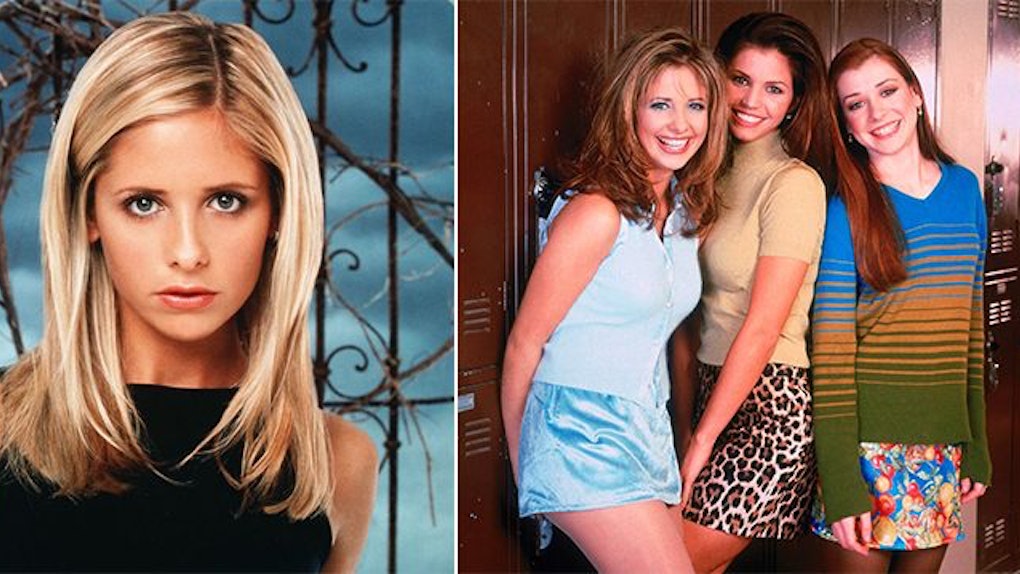 On March 10, 1997, "Buffy The Vampire Slayer" aired for the first time on The WB. It ran for seven seasons and 144 episodes, and today marks the series' 20th anniversary.

"Buffy the Vampire Slayer" wasn't really about vampires any more than Harry Potter was about wizards. Essentially, Buffy is the girl next door who gets thrown into a world of chaos and has everyone depending on her ability to fight back.

Giles, her vampire slayer mentor, tells her of her destiny, and she becomes the Vampire Slayer.

Here are nine life lessons from "Buffy The Vampire Slayer" and kickass quotes from the show, in honor of the show's 20th anniversary:

1. She was a role model for kickass women.

Back in the 1990s, most heroes were men. But Buffy was much more than that. She portrayed the girl next door with her long, pretty hair, nice figure and looked like a princess.

But she was really a kickass, powerful woman, with a world of strength on her shoulders. She was the ultimate #GirlBoss.

I'm the thing that monsters have nightmares about. And right now, you and me are gonna show 'em why.

2. She took her responsibilities seriously, even if she doubted them at times.

She sometimes feared her own job as being a burden while others looked at it as “fun." It was something she couldn't change and didn't choose to take on such responsibility. That's life.

When things get thrown your way, you have to suck it up and deal with it.

Strong is fighting. It's hard and it's painful and it's every day. It's what we have to do, and we can do it together, but if you're too much of a coward for that, then burn.

3. She taught us to never underestimate a woman's strength.

You have to put in the work. Buffy can fight just about anything out there from all the practice and training she got fighting vampires.

People would constantly underestimate her power — including Giles, her mentor — but she never let it bring her down. She would fight just about anything, whether it was hand-to-hand combat or with weapons such as swords or stakes. She was heroic.

Willow and Tara's love for each other was simply beautiful. Individuals struggling with their sexuality were moved by their relationship, specifically in the episode, “Once More With Feeling.”

There was also a moment where people questioned Buffy's sexuality between her and Faith. Buffy's encounter with Satsu left people uncertain whether or not she was bisexual.

Either way, her support for all sexualities set a great example for all other shows on TV and provided inspiration for the LGBT community.

5. Your friends are your family.

Buffy sacrificed everything in order to save those closest to her. She invested her time in deep relationships and supported her friends through their darkest and happiest moments.

A slayer with family and friends. That sure as hell wasn't in the brochure.

6. You can be raised to be strong by a single parent.

Growing up isn't easy, and not all families are perfect. Buffy proved she was able to grow up as a strong woman with a single mother raising her.

Everyday kids are fighting an endless battle with losing a parent. Some can relate to this more then others, but Buffy really touched the lives of people who grow up without a mother or father. And that is something worth giving credit to.

Her mother's sudden death was a major situation Buffy had to deal with, and it showed her strength of handling immense pain. Fans admitted she helped them fight through their depression from being able to connect with her.

7. Everyone deserves a second chance.

Buffy always looked for the best in everyone and expected the same in return, giving them chance after chance (even if they didn't technically deserve it).

She pushes others to keep on living and would constantly break down from trying to hold it together too much. It's normal to feel such things, but it's also normal to not always know what to do. We are not perfect, and neither was Buffy.

After falling in love with Angel, she even said not all vampires are bad.

Be easier, wouldn't it? If it were an act? But it's not. You faced the monster inside of you, and you fought back. You risked everything to be a better man. And you can be. You are. You may not see it… but I do. I do. I believe in you, Spike.

Buffy faces some serious breakups throughout the series. When Angel tells Buffy he's leaving in “The Prom” episode, the audience was brought to tears.

Because after all, love and desire come with agony and fighting, especially when you're always chasing after the “bad guys."

It is notable that the men Buffy was drawn to were actually her enemies' species, but Buffy was never dependent on any man in any of her relationships.

In fact, she broke off one of her relationships because she wasn't ready to fully commit toit without getting to know herself first. Her Slayer status constantly conflicted some of her relationships and having the ability to live a “normal” life, but she managed and life goes on. And she never backed down.

[Humans are] incapable of thinking about what they want beyond the moment. They kill each other, which is clearly insane. And yet, here's the thing – when it's something that really matters, they fight. I mean, they're lame morons for fighting, but they do. They never… never quit. So I guess I will keep fighting too.

When this show aired, most feminists had to hide things that Buffy was not afraid to.

Buffy portrayed that beautifully. What the show has to say about choice and agency, about power and patriarchy, about life and death, will always resonate with me forever.

In one of the final episodes of "Buffy The Vampire Slayer," Willow casts a spell that gives other girls the superpowers Buffy had been given. They realized all girls could be just like Buffy, thriving from power they never imagined could be shared.

After sharing the Slayer's powers, Willow says, “We changed the world.” She could have been signifying the shows impact on society at the time, but Buffy was a female role model in the popular culture of my childhood nonetheless.

This morning, Sarah Michelle Gellar reflected back on the character she played via Instagram in an emotional caption, saying,

She's a feminist challenge to gender hierarchy. Buffy may have been the chosen one, but I was the lucky one. If the apocalypse comes, beep me.

If you need a new show to binge-watch, here is your show. With everything going on in today's society, we could totally use a little Buffy in it.