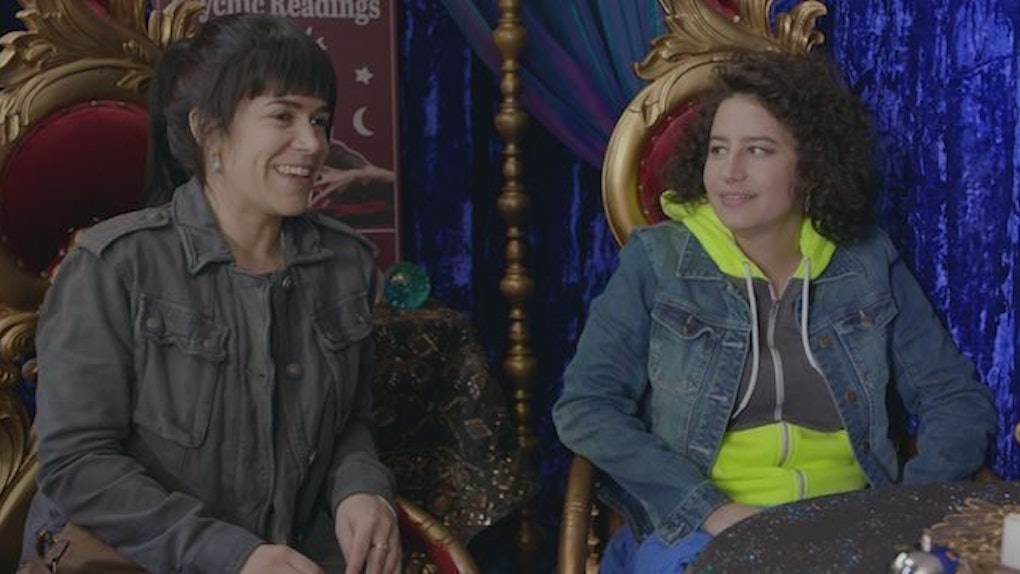 If you listen closely you can hear the sounds of thousands of millennial women quietly whispering "Yas queen" to themselves all across the world today. Why? Because today, September 13, is the day Comedy Central's Broad City finally, finally returns. The season premiere technically airs tonight on Comedy Central at 10:30pm ET, but you can also watch Broad City Season 4 Episode 1 literally right now.

How is this magical miracle possible, you ask? It's because Broad City Season 4 Episode 1, "Sliding Doors," is currently streaming on Comedy Central's official website. Not only can you watch the entire episode right now, but you also get an exclusive behind the scenes interview with Abbi Jacobson and Ilana Glazer right after the episode ends.

Now, no spoilers, but the episode is an homage to the 1998 comedy drama film Sliding Doors. The film depicts the two ways Gwyneth Paltrow's life could have gone based on whether or not she catches a train. In one timeline she meets the love her life, John Hannah, on a train, but (spoilers) ultimately dies. In the other timeline, she survives and meets Hannah at the very end of the film. Throughout the film, the scenes switch between the two timelines with a fade out and a wind chime sound effect.

If you saw the Broad City Season 4 teaser released by Comedy Central earlier this summer, "When Abbi Met Ilana," you'll definitely see the similarities and nods to Sliding Doors right away.

The rest of the Broad City Season 4 premiere follows that same format, however, the episode gives it a twist that the movie didn't have. In both universes of made the train/didn't make the train, Abbi and Ilana meet and become friends. In one version they have an awesome day, and in one version they have a terrible day. OK, that's all I'll say for now, you'll have to watch the episode to find out more.

It's been a long wait for Broad City fans between the Season 3 finale and this premiere. For the first three season, the half-hour comedy has been a spring show, meaning the Season 3 finale aired way back in April of 2016. However, this year the show switched things up with a fall schedule, meaning fans had to wait an extra seven months for their Abbi and Ilana fix.

Hopefully though, the wait will be worth it. Creators and stars, Jacobson and Glazer, have promised a "more intense," politically-charged season, in the wake of the 2016 election. In a Broad City Q&A attended by Elite Daily in June, Glazer said of the upcoming season,

We started [writing] in April [2016], we ended in June? July? And then we took a hiatus, usually, we write and we shoot right after, and this was the first time that we ever had a break … thank God we had that, like I'm so happy we had that break, because when Ilana and I came back you know we had these scripts that were like good-ish but we were kinda like … we feel totally different now, the world feels totally different now.

So it sounds like we can expect some more of that political trauma we've all been feeling for the last year from our girls. But hopefully Abbi and Ilana find a way to make it a little funnier.