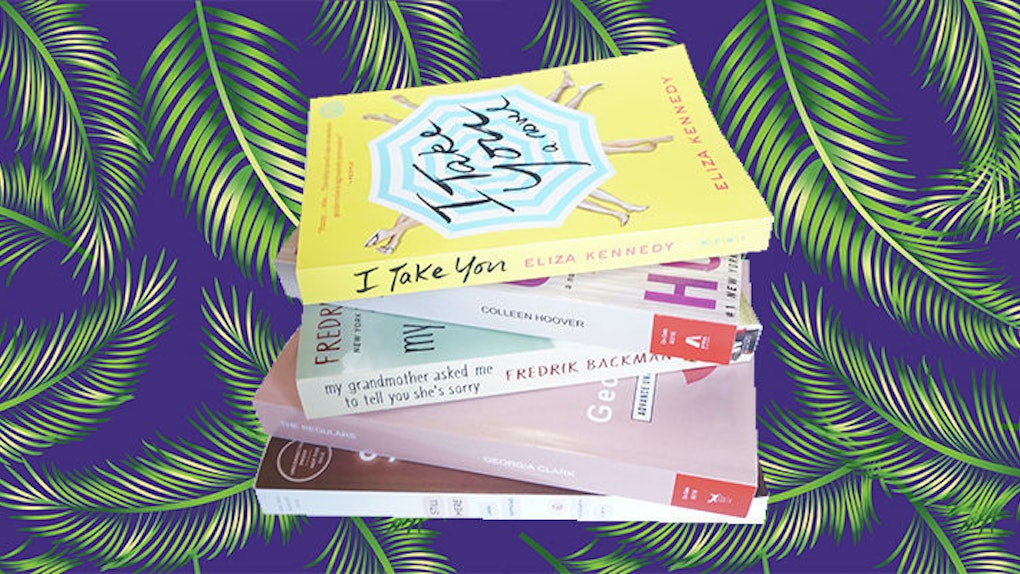 What Book You Should Read This Summer, Based On Your Zodiac Sign

I have absolutely zero self-control when it comes to two things: a book with a bright, attractive cover and anything that reads "zodiac" or "horoscope."

I will hand over $27 for the hardcover versus the paperback, and I'll spend a significant amount of time trying to figure out what my horoscope means when it says "multiple people have their eyes" on me and "a large sum of money" will come my way this month... I've been promised both several times and I'm still waiting.

As a Capricorn, I'm supposed to be practical and disciplined, but everyone needs some balance. I am a typical Capricorn in my obsessive drive for success, which is exactly why I'm chilling out and reading "The Singles Game" by Lauren Weisberger, which finally takes my mind off of work.

See which summer read you should have in your bag based on your zodiac sign below.

If you're an Aquarius, you tend to be on the independent side. You do your own thing and your friends tend to get upset when you detach and refuse to show your emotions. Sound familiar? Well, the next time you feel that way, pick up Patrick Flanery's "I Am No One."

Jeremy O'Keefe returns to New York after a decade in England, and something just isn't right. Soon, he realizes someone is following him, leaving strange packages and letting him know he is under surveillance. The idea he could possibly have committed a crime starts to creep into Jeremy's mind -- is he a traitor?

Be careful, Aquarius, don't let your fear show while reading this thriller.

"The Wolf Road" is the only book an imaginative Pisces needs this summer. You're the type of person who craves adventure and escaping real life. Luckily for you, that's why reading exists.

For as long as she can remember, Elka has lived with Trapper, a man who taught her everything about survival in the wilderness. Elka eventually finds out he harbors dark, terrible secrets, and realizes she must escape. So she sets off to find her parents in the frozen north, but Trapper doesn't want her to get away...

I know you're sensitive, Pisces, so I guarantee Elka will become one of those memorable characters who latches onto your heart.

While an Aries can be quick-witted and adventurous, he or she is also pretty impulsive and impatient.

So is the case with Julia Greenfield in Emma Rathbone's "Losing It." The 26-year-old is, you guessed it, a virgin, and she's more than ready to shake off that title. Even if you're not a virgin (or an Aries), the struggle of finding yourself is way too relatable.

Colleen Hoover's "It Ends With Us" takes on the worst thing about dating: falling for someone who has a strict "no dating" rule. For a Taurus -- someone who is patient, warmhearted and loving but also gets jealous easily -- this is a nightmare.

But that's the whole point of reading, right? You get to enjoy and experience the drama, but it isn't actually happening to you. Thank god.

"The Regulars" by Georgia Clark, $16, Amazon

Come August, Gemini, you'll be seeing "The Regulars" everywhere. Being the witty and communicative person you are, being last on the trend won't sit too well.

Georgia Clark's novel is about a group of best friends -- 20-somethings in New York dealing with rent, online dating and the corporate world -- who come across a "magic tincture" that turns them from "regulars" into basically supermodels.

Of course, there's a dark side to this... because being superficial doesn't always pay off. As a Gemini, you can probably relate.

"My Grandmother Asked Me To Tell You She's Sorry" by Fredrik Backman, $10, Amazon

In "My Grandmother Asked Me To Tell You She's Sorry," 7-year-old Elsa loses her grandmother, her one and only friend. Her grandmother left behind letters full of apologies for people she had wronged, leading Elsa to a world full of monsters, drunks and fairytales.

Trust me, you and your clingy nature won't be able to let this story go.

"Sons and Daughters of Ease and Plenty" by Ramona Ausubel, $15, Amazon

So you're a little pompous, Leo, and often patronizing. That's why you need to take a step back and listen to my recommendation for your summer read.

Fern, Edgar and their children no longer have any money. It's all gone, everything goes downhill and all of a sudden, the kids are left to fend for themselves. Ausubel's exploration of family, wealth and privilege is refreshingly profound and original.

Relax, Virgo, I know you were worried I wouldn't find the perfect book for you.

You'll soon be absorbed in Lara Vapnyar's "Still Here," a story of four Russian immigrants in America whose ambitions lead to the creation of an app that allows people to control their online presence after they die. You may find yourself questioning that fine line between what's avant-garde and what's too far -- and the entire existence of the internet in general.

You, my friend, are indecisive. You're also easily influenced, so getting you to read "The After Party" shouldn't be too hard. Kidding. Kind of.

Anyway, Jana Prikryl's collection of poems is the perfect complement to your whirlwind of a summer; you can take it to the beach and not worry about making it through a chapter and your easygoing nature will appreciate Prikryl's journey and wide range of ideas.

I know you're determined to read as many books as possible this summer, Scorpio, but you should start with "One True Loves."  I know you're already interested after just hearing the title. But you can't help it; you're a passionate person.

Emma's husband, Jesse, goes missing one year after they marry. In order to grieve and move on with her life, she moves home and ends up falling in love again.

But then Jesse is found, and Emma must decide which man is her "one true love." Taylor Jenkins Reid's latest is powerful, exciting and magnetic -- just like you.

The Sagittarius is optimistic, good-humored but also a bit restless, so he or she needs a quick read this summer.

Eliza Kennedy's "I Take You" will have you turning pages more often than Lily Wilder, the main character, drinks and goes out. She's supposed to be marrying her fiancé, Will, soon, but as the wedding nears, it becomes apparent marrying him might be the worst mistake of her life.

Calm down, my fellow Capricorns. Although ambition is one of our best traits, it's time to take a break from focusing on your career and focus on someone else's life and someone else's drama.

In "The Singles Game," Weisberger (the author of "The Devil Wears Prada") introduces us to Charlotte, a tennis star thrown into a life filled with celebrities, yachts, gossip and, of course, a love affair with the sexiest male player.

Yes, you pessimistic Capricorn, Charlie's rise in the social ranks does come with a price.