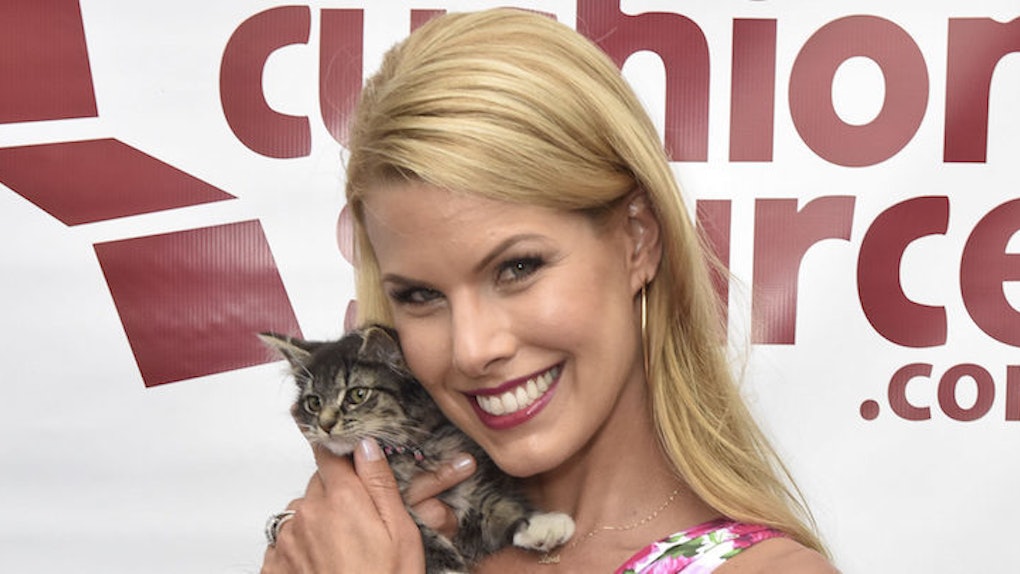 Wife to radio personality Howard Stern, Beth became a name to remember before her journey with the "Kitten Bowl" began, when she walked the runway for North Shore Animal League over 10 years ago, holding an adoptable puppy in her arms while dressed in a couture fashion gown.

She recalls modeling for NSAL's annual fundraising luncheon and tells me she refused to leave the venue until every puppy had been adopted. It was this pivotal moment that would usher in a new chapter in Beth's life.

"How lucky am I?" she says of the opportunity to be the face of the über-successful adoption event. When Hallmark Channel first pitched Beth on the show three years ago, she remembers the feeling:

I couldn't even believe it. I said, 'This is a joke -- that's the greatest job in the world, that I get to sit on a field and have kittens crawl all over me, and promote animal adoption.'

Since filming, the 100 cats and kittens involved in this year's "Kitten Bowl" have been adopted, continuing the event's 100 percent success rate since its inception.

It's not just the luck of the draw for the batch of kittens and cats that get their 15 minutes of fame, however; the "Kitten Bowl" raises awareness for animals in need in the months leading up to the event, paving the way for hundreds more animals to find loving homes.

We hold kitten parties all over the United States with partnering shelters, and there are so many adoption events and specials where thousands [of animals] -- even dogs, cat, puppies and kittens -- are all adopted that day because of the awareness Hallmark Channel brings [from] the 'Kitten Bowl.'

It's for this reason Beth hosts the annual event. She says,

It's proven that they've increased adoptions because of it and that's why I continue to do it. It's really special and so meaningful to me that that's what happens as a result of us all coming together and celebrating the cuteness of kittens.

Beth's grassroots efforts extend much further beyond the scope of national television, however, as well as her relationship with "Kitten Bowl" partner North Shore Animal League, the world's largest no-kill animal shelter.

Beth has been a volunteer for the rescue since the day she walked that runway over 10 years ago, covering adoption events and making appearances on talk shows as the shelter's spokesperson.

What the experience has awarded her is realizing her passion for being hands-on with the animals, caring for them directly and gifting them with promising futures.

When her and Howard's beloved dog, Bianca, passed away three years ago, Beth vowed to go the extra mile for cats upon realizing the low adoption rate of felines compared to canines at the rescue. Since then, they have gone on to house, nurture and find homes for over 200 cats.

The couple first opened their home to adult special needs cats, before upping the ante with a whole litter of kittens. Beth recounts where her journey to becoming foster mom for hundreds of cats began,

I went to a kill shelter -- a municipal shelter -- where this litter of kittens was about to be euthanized, and I literally took them an hour away from being euthanized, brought them home and nurtured them and had them for the weeks needed until they were healthy and at the proper weight for spay and neuter, and I had them spayed and neutered. Then it began.

Almost 4 million cats enter shelters every year, of a rough 70 million stray cats nationwide, and a significant portion of those are euthanized before getting another chance at life in a loving home. Beth's activist efforts are attributing names -- a job Howard dutifully takes on -- and personalities to hundreds of cats that might be otherwise overlooked in a quick shelter walkthrough.

She talks about the "formula that's working magic" in finding her foster cats homes, owing her success stories to a combination of social media, her position in the public eye and Howard utilizing his radio platform as a medium to boast about his wife's passion.

The way she describes her husband places him in a vulnerable spotlight, a gentle persona which most fans might never have envisioned possible from the crude humor by which he's made his name. She tells me,

My husband talks about my rescue work; he's apart of it. He's my partner. ... He's with me when I'm socializing the kittens. I was in Los Angeles ... and Howard was on kitten duty. He was sending me hourly updates; he was cleaning litter boxes.

Fostering is a full-time job, a gig most would consider too great a commitment or responsibility to take on amongst the busyness of daily life. But for Beth, it's her calling, her life's passion. Instead of peddling over the time she must devote to taking care of her animals, she thrives in it.

About the 24/7 job, Beth tells me, "I know it's my purpose in life. I love it; I live for it." Howard even made an attempt at persuading his wife to take the bench for a quarter, give herself a breather from the constant "mommy" role to her foster cats, but giving up on these animals is a non-negotiable for the 43-year-old.

I'm just so addicted to it; it feels so good. And I know there are lives involved that need me, and so I'm not stopping anytime soon.

Beth's love for animals isn't a newfound calling brought on in the past decade. The Pittsburgh native grew up surrounded by animals, a result of her family's parallel resolve to caring for animals in need. Her dedication has firm roots in that upbringing, which she remembers fondly,

I think it's in my blood, honestly. ... I didn't even realize you could buy pets, just because all of our pets were either pets [my family] found on the street, or neighbors didn't want their pets, so we ended up adopting them. We always rescued the wildlife -- hurt wildlife -- that were in our yard, took them to the rehab place and then released them. It just was something that was part of our everyday growing up.

Fostering is a job that comes with significant emotional reward but also emotional toll. Imagine investing your days in nurturing animals as members of your own family, only to gift them to a qualified home in due time.

If Beth could offer a word of advice to anyone looking to volunteer their time to foster shelter animals as she does, she'd warn of the emotional attachment, but heed the importance of saving lives.

She's no stranger to the feeling of, "I have to keep this animal," during the process, but what keeps her sane and committed to the program is knowing she can save another life when she sends one off to a loving home -- that moment she refers to as, "My fosters are ready to fly."

When her kittens flee the coup is the hardest part of the process for Beth. She says,

It's so hard for me to let go; I get so attached. I fall madly in love with every one of them, and then people are always like, 'You should keep them!' I'm not keeping my fosters. And what I do is once I deliver to somebody, and it's so sad to let them go, I go right to North Shore Animal League and I pick up my next batch. I always have somebody waiting for me, so I know when I have a life that I'm handing over to an amazing family, there's another life that I am able to foster and take care of and find a home for, which opens up another space at North Shore Animal League to save another life. That keeps me driven and keeps my mission and my purpose focused, and that's how I'm able to do it.

Although she's ended up adopting two fosters as her own -- Yoda and Bella, whom she calls her "Foster Fails" -- failing isn't necessarily the appropriate term to explain her being unable to let go of these particular cats.

Yoda, an adult white Persian cat named by Howard, was given a three-month prognosis by veterinarians when Beth decided he deserved a comfortable home in which to live out his last days.

Three months has turned into two years, a miracle to some degree, and Yoda is still the king of the kitty castle at the Stern household. Beth tells me what she thinks played a part in elongating Yoda's time was when she brought home a litter of kittens, which Yoda would immediately take to caring for.

The story of Yoda coming back to life, "from a sad heart, to a happy heart," is one of Beth's two children's books, "Yoda: The Story of a Cat and His Kittens."

Though doctors can't explain Yoda living far beyond his life expectancy, Beth is confident in how it happened: "Love and purpose healed his heart."

Beth's genuine connection to her work is evident in the way she shines when talking about her fosters and resident cats. She's paving the way for a new practice through which animals are not simply tolerated but celebrated and awarded humane treatment, given homes in which they will be cherished for the duration of their much-too-short lives.

Beth is solicitous about the well-being of not only cats but all shelter animals in need, and her action to effect change through her position in the public eye is selfless at the very least.

"Kitten Bowl III" premieres at 12 pm ET/PT on "Su-purr Bowl Sunday," exclusively on the Hallmark Channel. Don't miss Beth hosting the annual event and all of the kitten cuteness to be indulged before the big game.