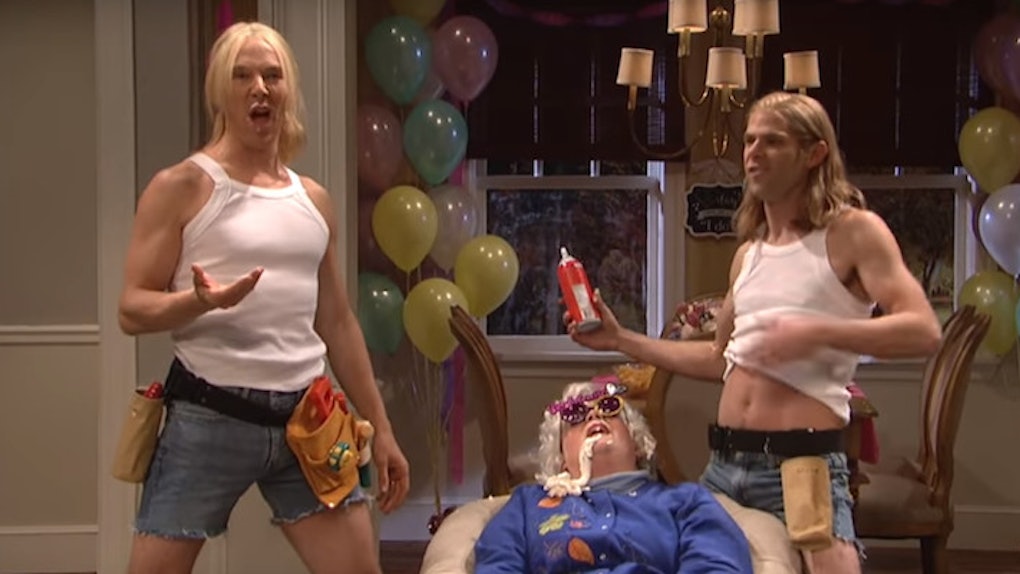 Benedict Cumberbatch And The Chicago Cubs Strip Down In 'SNL' Skit

I don't know where to begin dismantling this week's "Saturday Night Live" sketch.

Do I start with Chicago Cubs' David Ross in hot pants or Benedict Cumberbatch gyrating his penis in the face of a grandmother?

Tell you what, I'll just take it from the top.

The "Surprise Bachelorette" party kicks off with "grammy" coming back from a restaurant where she celebrated news she is getting remarried at 83.

But what she doesn't know is the party ain't over. In fact, it hasn't even begun.

At that point, she passes out (dies?), which is a real shame, because she misses Benedict Cumberbatch as a stripper.

He's part of a two-piece act from the "construction company" that has come with a "delivery of some heavy wood."

The minutes that ensue are a kind of a blur. It's a casserole of flesh and sleaze. They mount a now dead grammy and give her the classic:

MMM, my favorite flavor — her mouth.

Then she gets front-row tickets to a workout session with Benedict's groin. He makes her his Cumberbitch.

But the party's still not over. They reveal that grammy is their 1,000th customer, so she gets another special treat: a strip from World Series champions Anthony Rizzo, David Ross and Dexter Fowler of the Chicago Cubs.

Fowler rips off his shirt and Ross says,

Then he climbs the chair and mounts grammy's face, again. His teammates surround her and she gets a dance everyone at home is jealous of.

Anthony Rizzo has clearly done this before. Twerk game = on point.