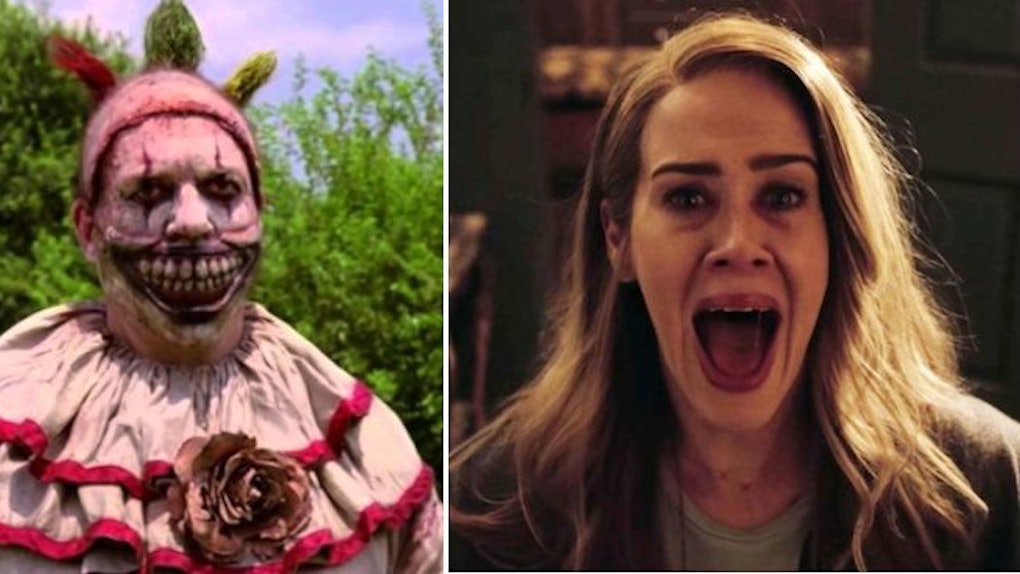 Scariest 'American Horror Story' Moments To Get You Ready For The "AHS: Cult" Premiere

Over the years American Horror Story has gained a reputation for its unusually spooky, super creepy brand of horror. From the supernatural terrors of Murder House to the sinister cannibalism of Roanoke, the diehard fans of the show have seen some sh*t we can't ever unsee. Admittedly, some seasons of the show have been better than others, but that doesn't mean each chapter hasn't had its fair share of gross, cringe-worthy, and horrifying moments. As we gear up for the premiere of Season 7 of AHS, it seems like a perfect time to revisit some of the scariest American Horror Story moments of seasons past.

It's hard to look back on the past six chapters of the show and select only a few terrifying, strange, and disgusting moments, but there are certainly shining examples worth mentioning that perfectly exhibit the type of freaky we have come to expect (and love) from Ryan Murphy.

That being said, the following moments are some of the most frightening, outrageously chilling, over-the-top disgusting, and downright creepy moments to have ever happened on American Horror Story. I hope you're ready to relive the terror you experienced the first time you saw them.

After regaining her sight, Cordelia loses her psychic visions; in an attempt to get her visions back, she blinds herself with a pair of gardening shears. Yikes.

Shelby opening up the shower curtain to find the Piggy Man lurking there with a blade certainly made us jump for high hell.

Scare factor 6/10 — didn't really care for Shelby, so was hoping that weird pig would get her.

4. Twisty at the park (Freak Show)

The first time we meet Twisty he knocks two teens unconscious, then he murders one and kidnaps the other to hold hostage in his unfurnished bus.

5. Lana giving herself an abortion (Asylum)

In the ninth episode of Season 2, Lana tries to abort Oliver Thredson's demon baby with a coat hanger. The scene is gruesome and chilling to say the least.

Scare factor 8/10 — I don't think she has a medical license.

6. Shelley dragging herself up the playground stairs (Asylum)

After having her legs amputated and being tortured, Shelley is dropped off at a school playground. Her crawling up the stairs and barely breathing are haunting.

7. Thaddeus in the basement (Murder House)

There's nothing like a good 'ole jump scare, and this one in particular will get you every single time.

Violet's ghost discovering her own body in the crawl space is everything we love about AHS: it's sad, gruesome, and terrifying, and it definitely delivers one of the first "OMFG" shocks of the series.

Scare factor: 8/10 — watched through my fingers.

9. Dr. Oliver Thredson reveals himself to be Bloody Face (Asylum)

There was no greater feeling than when Thredson helped Lana escape from the Asylum where she was tortured, but that was quickly shot to hell when we found out Thredson was Bloody Face the whole time.

All I know is if American Horror Story: Cult is even half as odd, creepy, and terrifying as some of these moments in AHS history, then we are DEFINITELY in for one hell of a scary season.

There is one major difference this time around, though: This is AHS's first season to have no supernatural elements, so it will be interesting to see where the horror stems from. There's no telling what sort of terror we're in for this fall, but I'm sure we'll be watching through our fingers as we have many times in the past.