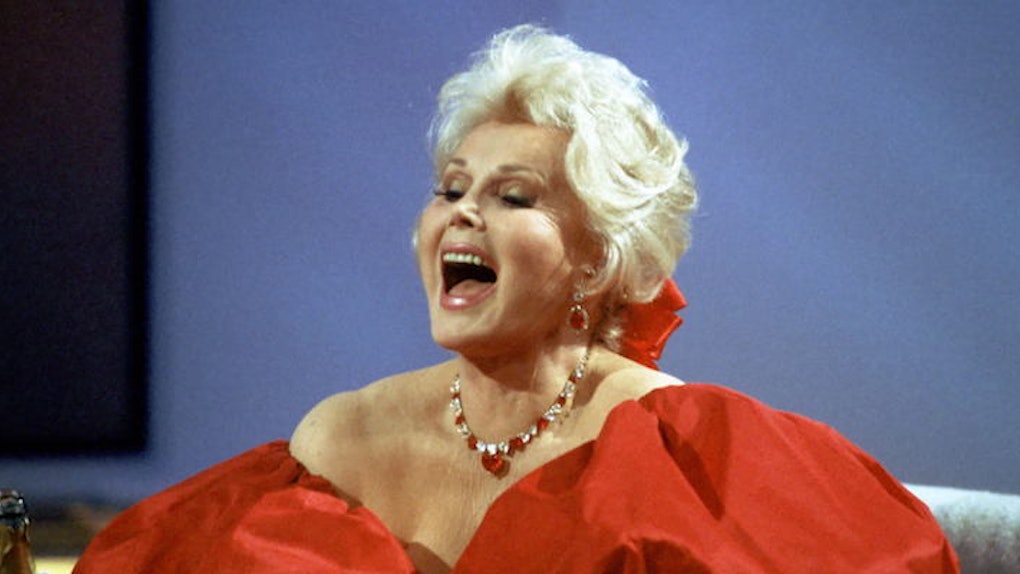 If You're A Single Girl, You Need To Know These Zsa Zsa Gabor Quotes

Glamour icon and Hungarian-American actress Zsa Zsa Gabor died this past weekend after suffering a heart attack in her Bel-Aire home.

She was just two days shy of her 100th birthday.

Although Gabor had about 76 acting credits to her name, she was much better known as a love and romance guru. She was married a whopping nine times  — one of which literally only lasted a day before it was annulled. (Step aside, Kim K!)

So yeah, the woman knew a thing or two when it came to relationships.

Her multiple marriages included the adopted son of German royalty (making her a Princess!!), a Turkish diplomat, a hotelier, an English actor, a Mexican actor, a Beverly Hills investor, a Texas socialite, an inventor AND a divorce lawyer.

Best of all, she was incredibly candid and vocal about her opinions on dating, men and marriage. Her flippant and always endearing attitude toward relationships made for some pretty amazing quotes and mantras that women can still relate to now.

Gabor's empowering advice to single women (and all women, really) is timeless. Below are some of her best one-liners that you should commit to memory:

A man in love is incomplete until he is married. Then he is finished.

To a smart girl, men are no problem — they're the answer.

The only place men want depth in a woman is in her décolletage.

Husbands are like fires. They go out when unattended.

I never hated a man enough to give him his diamonds back.

I am a marvelous housekeeper. Every time I leave a man, I keep his house.

On finding the one:

I want a man who is kind and understanding. Is that too much to ask of a millionaire?

Being jealous of beautiful women is not going to make you more beautiful.

Sexual attraction only lasts two years, and who wants to stay with a man if you're not sexually attracted?

When I'm alone, I can sleep crossways in bed without an argument.

You never really know a man until you have divorced him.

A girl must marry for love, and keep on marrying until she finds it.