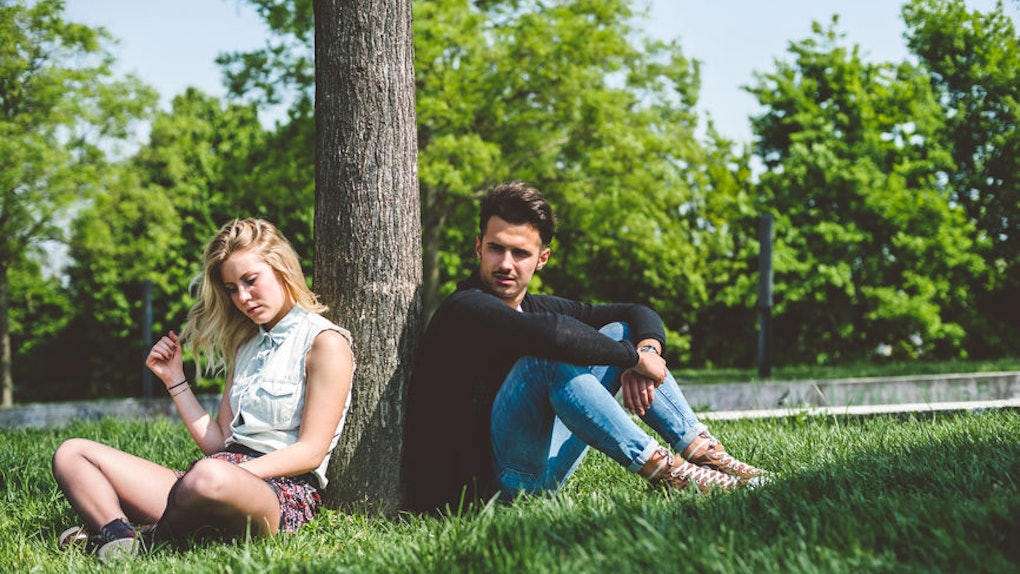 The Hopeless Case: Why Women Will Always Chase The Men Who Will Break Their Hearts

Women, like men, crave what they can’t have. Whether it’s designer clothes, unlimited bread sticks or men who will never settle... they long for what they know is bad for them.

They like to walk that fine line between safe and dangerous, with the price tag, calorie count and wild history of the man they know they shouldn’t get involved with, dangling right in front of them.

It’s the rush, the anticipation, the amazing feeling of having something you know you shouldn’t even be holding. It’s that warm, buttery feeling of the first bite and the exciting thrill of a man’s arms around you.

But what about after? When your bank account is empty, the bread has gone to your thighs and you’re crying in your room over the man who broke your heart? What about that sick feeling when you know it’s your fault, when you realize your pain was self-inflicted? Why do we always give in? Why do we always chase the hopeless case?

The answer to that question is almost entirely subjective, but there are some universal properties within those explanations that I think all women share.

The hopeless case is a type of man who is not good for you. He is the guy you parked with a few times in high school who never asked you to prom or the college jock who drank as much as he complimented himself (too much). He’s the one who will never settle down with you, will always cheat on you and will never apologize.

He’s the smooth talker, the charmer, the one who just has something about him. He’s also the one who forgets to call, never follows through and is most likely always with another woman. He’s an assh*le, a flirt and just general bad news.

However, this type of bad news, like tsunamis and hurricanes, always piques our interest. It’s the type of bad news you can’t look away from, even if you wanted to. It's the drama we hate to love and the men we hate to find ourselves attracted to.

They are our weaknesses, like rich chocolate and tequila shots, who are able to bring any rational woman to her knees, writhing in pain. So before you go down the rabbit hole of hopeless men, try and figure out why you're so damn attracted to them.

“Grease” may be an outdated example, and I’m sure there is at least one Nicholas Sparks movie that falls under the category of a woman who whipped a bad boy into shape, but I just love John Travolta in a leather T-Bird jacket.

But whatever movie comes to your mind, we all know that the hopeless case is the challenge every woman wants to take on at least once, to see if she can be the one to tame him, the one who gets him to trade in his black leather jacket for a white Letterman sweater.

However, this is rarely accomplished and all we end up with a bad perm and a leather bodysuit we’ll never wear again.

We’ve Always Wanted To Be A Bond Girl

Women crave danger as much as men do, even if there are no guns in our scenarios. Though we don’t always crave physical violence, we definitely crave the emotional thrashings that can leave us writhing and bleeding on the ground.

We like the idea of gambling with our hearts if it means a few hours, weeks, months or years with a man who will make it race. The thrill of going after a man who can’t be tamed is as addictive and intoxicating as shoplifting or creating a new identity.

Whether we admit it to ourselves or not, we’re all habitual self-inflicters of pain. We do things to ourselves that are not only dangerous, but knowingly harmful. We buy uncomfortable shoes, walk home alone and drunk, and go out with men who will definitely break our hearts.

We do things two, three, four times after learning something is bad for us just because we’ve gotten in the habit and think we like it.

No Two Hopeless Cases Are The Same

The main attraction to the hopeless case is his uniqueness. These men are different than the guys you know you can get and are much more exciting than your average Joe.

Some women love drama as much as they love danger. They crave the tears, the fights and the screaming the same way they crave heartbreak. Because heartbreak is better than feeling nothing, right? And some drama is always better than a life of planned schedules and boring relationships.

However, like the ladies of "Real Housewives" and "Bad Girls Club," the drama will always end, but at a price. Women will chase the hopeless case until they get hurt, tired and scared enough to finally crave the stable and secure man.