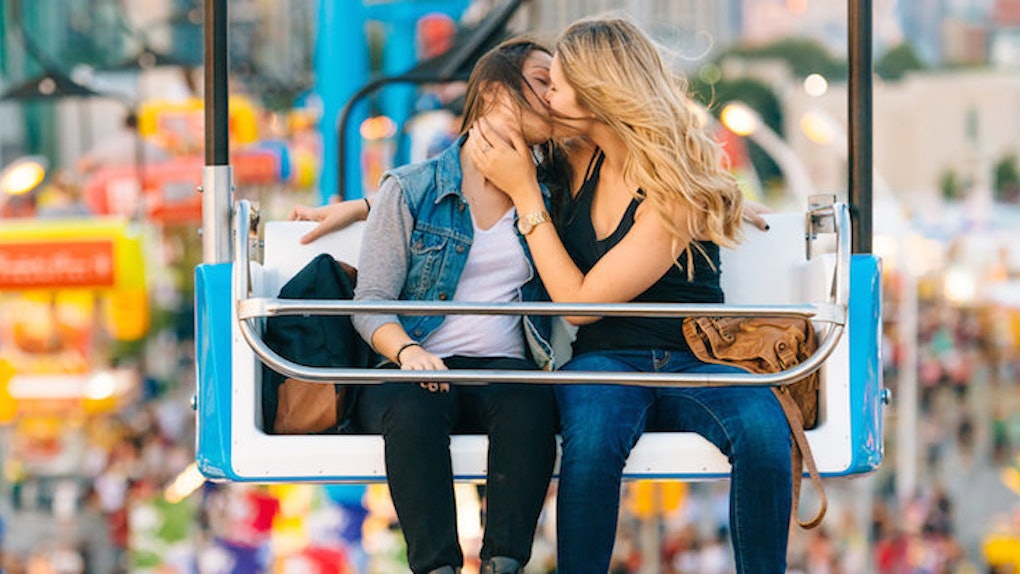 I always had my discovery setting set to both men and women.

After all, it’s not like I hadn’t been there before. As a women’s studies major, I had my somewhat-stereotypical brush with lesbianism when I dated a girl for a few semesters back in college.

Throw in a handful of drunken make-out sessions and I had pretty much accepted my own sexual fluidity. However, whenever a girl’s face would flash across my Tinder screen, I would have a temporary moment of confusion and need for pause.

“Why is there a girl here?” I would think to myself. Then I would remember: “Oh, yeah, I chose the settings.”

Typically, I would breeze right by them with a quick swipe of the thumb to the left.

But when she popped up on my screen, she was just so pretty I was intrigued.

As a very feminine person, I usually place a double standard on those women, assuming there is no way they are into girls when they look, well, like me. Something about her preppy optimism intrigued me. How she was sporting a lacy bridesmaid's dress in one photo and meticulously curled waves in the next.

I went out on a limb and swiped right. It was a match!

I'm not sure what got into me (besides curiosity, of course), but I struck up a conversation with this girl. It was as easy and unforced as the easiest conversations I had with other anonymous strangers on the app.

Later that evening, after some drinks, I brazenly texted her: “So, when are we meeting?”

We chatted a bit more and set a date.

From a place within myself I had not even known existed (mostly fueled by the power of wine), I ended the conversation by saying, “I would be honored to be the first woman to take you out and wine you as I would expect a man to do for me.”

I think these are the kinds of things people do when they are in their 20s.

No, I am not talking about suddenly deciding to go on homosexual dates when they identify predominantly as straight. I just mean that when you are going about the process of finding yourself, pushing the envelope and surprising yourself is a huge aspect of self-discovery.

I hadn’t spent any time in my life imagining asking out a woman and I never expected to, but I was so inexplicably captivated I just did it without thought. It wasn’t until the morning after our date (about 30 seconds after she left my apartment) that I had this moment where I felt like I was being hit on the side of my head with a brick.

“Who are you?” I shouted at myself.

I wasn’t ashamed about what I’d done. On the contrary, she was a lovely, kind, funny and beautiful person. And I had a wonderful time with her.

In fact, it was much easier to go on a date with her than a man because I wasn’t nearly as nervous, since I was not as emotionally invested.

I just had come to this realization that I could feel so strongly about aspects of my identity and with very little forethought, this could completely change. It was hard to think I knew myself and then realize I was still figuring it out.

It was scary to think I was an adult, paying my bills, living alone in New York. And I could just act so completely out of character and cause myself to question the parts of me I thought I had come to know so well over the past 24 years.

It wasn’t as much about sleeping with her as the aggressive and ballsy way I had gone about it. It was completely out of character. And while it was happening, I couldn’t actually believe it was me who was doing it.

Our date had been really sweet. We chatted about hair, clothes, boys and our lives, as I would with any female friend. And in fact, I would totally be her friend (and probably also sleep with her again).

Ultimately, the nerves and uncontrollable emotional attachment I experience with men lead me to believe that my feet are firmly planted on the straight side of the fence. But occasionally, if I have cause to peek over the other side, I am going to try hard not to question myself too much.

Society tells us we all need to look, act, think and behave a certain way. I often feel an inexplicable pressure to define myself in all aspects of my life -- with careers, relationships, friendships, goals, qualities and even sexual identity.

Far too often, people are afraid of deviating from these definitions for fear of having a moment like the one that I had after my date: The kind of moment that causes you to question your own identity.

After all, what do you know if you don’t know yourself?

But we should realize that it’s natural for all people to change and evolve over the course of their lives. If we embrace change and experimentation in a way that is mindful and considerate, it can only help us know ourselves better.

So, after my overdramatic mental breakdown about whether or not doing what I did made me someone I wasn’t, I came to the conclusion that I like myself either way.

And, hopefully, from my experience, other people might be able to come to the same conclusion.

Acting out of character is the most exciting aspect of being 20-something, when the most natural thing to do is to realize you haven’t got it all figured out just yet.