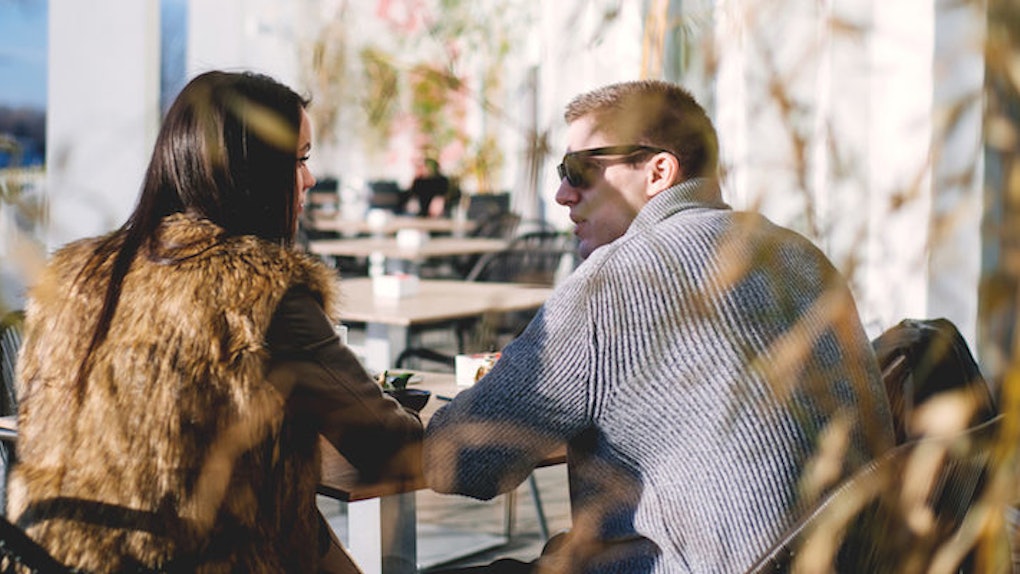 Why Refusing To Have The 'What Are We?' Talk Is Making Us All Miserable

When I face even the slightest chance of rejection, I become a ginormous coward. I actually avoid conversations that increase my chances of rejection.

This means that I don't put up with any "What are we?" talks. No matter how badly I'm DYING to figure out "what we are," I will absolutely not bring it up.

What if he says, "I want to marry you and have three kids in a suburban Midwestern home," and I'd been thinking this was a casual hookup? Or what if I was imagining our happy future together, and he made me feel like a total idiot?

So I avoid the conversation altogether. And I know I’m not alone.

Everybody these days has some sort of "talk" that's hanging in the balance. And they'll talk to everybody EXCEPT the person who most deserves their time (because the Uber driver can’t reject you, right?).

If we were all wildly happy in our relationships, I'd be fine with that. But whether it's cool to admit it or not, I'll just say it: Most of us are MISERABLE.

We're sentencing ourselves to dating purgatory, and nobody is making it all the way to heaven.

We let our fear of rejection trap us in dating purgatory.

I hate to be vulgar here (JK, no I don’t), but the best way to describe "dating purgatory" is by comparing it to constipation.

We all know how constipation goes. You have to poop. But you don’t want to poop, because it’s going to be awkward and smelly, and people will know that you do, in fact, poop.

Instead, you hold in your poop. Sure, you look cool. You look like you have your sh*t together (ha). But where is that getting you?! You're the most uncomfortable you have ever been and, as time goes on, your stomachache just so bad that you can't bear it anymore.

This urge to poop is equivalent to your urge to tell the person how you really feel. Your decision to hold your poop is similar to your decision to play it cool and hold back your true feelings. And the gut-wrenchingly painful constipation you get is an awkward emotional limbo.

Do you want the rest of this relationship to be one giant stomachache? NOPE. DIDN’T THINK SO.

We're so afraid of rejection's sting that we forget about ghosting, which is so much worse.

It's a terrible feeling to put yourself out there only to be shot down. I’ve felt rejection, and it’s not something I would not wish upon anyone.

I can tell you from first-hand experience that I would pick that feeling over being ghosted every time. Because it's always worse to assume you're on the same page with someone -- only to watch that person disappear into thin air and leave the door swinging.

We have forgotten that being in a relationship is not the same thing as MARRIAGE.

Dreading The Talk has made relationships so much more than they actually are.

People say they're afraid of commitment, and I’m over here like, LOL, WHO IS ASKING YOU TO “SETTLE DOWN”?!

Nobody is asking you to put a ring on it. There is no contract we are signing. Say you're "over it," and it's over.

We've built up The Talk so much that it's become something supposedly life-changing. Having The Talk does not equate to getting engaged, people.

Everybody needs to chill the f*ck out. Doing exactly what you've been doing for the past few months and deciding to call it a relationship isn’t going to change the course of your life.

The longer you wait to say something, the further you get into your own head.

The longer you wait to have this conversation with the person you SHOULD be talking to, the more time you waste.

"Well, he held my hand in PUBLIC this morning on the way to Starbucks -- that has to mean something right?"

"She ended things with her ex officially. That’s gotta be for me, right?"

"We’ve had four sober sleepovers this week alone. We’re obviously dating; I don’t need to bring it up."

Okay, here’s the thing. YES, YOU DO NEED TO BRING IT UP.

We waste time waiting for the nonexistent "perfect moment."

We’re all just trying to find that perfect moment when we can have The Talk.

Or maybe we think The Talk already happened, and we completely missed it. Maybe something happened that was supposed to be "understood," and OMG, we missed our perfect moment to discuss it.

News flash: There is no "perfect moment." That does not exist. Bringing up this conversation will NOT be awkward. That’s just the nature of it. It’s not a fun conversation to have.

But it’s something that has to happen. So when you even get the slightest urge, do yourself a favor and SAY something.

You wind up with a bunch of sort-of exes.

The WORST part about refusing to put a name to something -- or even talk about whatever it is the two of you are doing -- is what happens in the end. Because unless a conversation takes place, the relationship fizzles.

Not a breakup. A fizzle.

This person will casually fade out of your life, and you will have nothing to say about it. You will want to cry, but you can’t. Crying, you'll think, is "crazy," since you guys WEREN’T EVEN DATING.

Months from now, you might see your sort-of ex at a bar with someone new, and it will feel like knives are jabbing into your heart, but you won’t even know how to explain it to your friends.

What would you even call her? She can’t be your ex-girlfriend if she was never, well, your girlfriend in the first place. No, she was just a girl you consistently went on dates with, exclusively made love to and texted constantly for six months straight.

It was casual. She’s only sort of your ex.