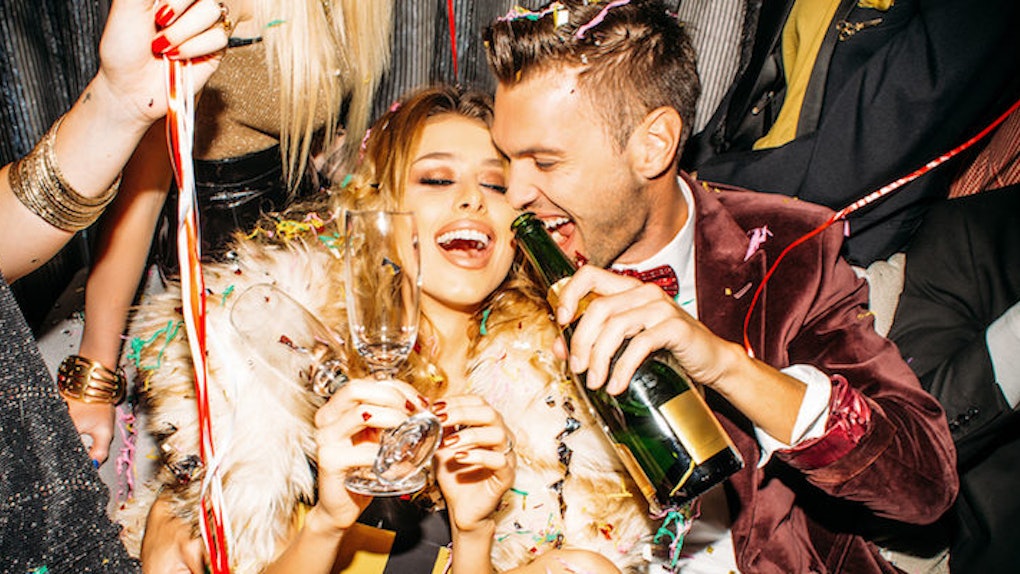 The most common complaint I hear from the smart, beautiful women I work with is that men always seem intimidated by them.

I get it; before I became a professional matchmaker, I felt that, too.

I'd dress up with perfectly applied makeup, only to face another night where man after man would look at me like a deer in headlights.

The truth is, a night out can bring out stressors both women and men may feel too afraid to confront.

And for women specifically, the competition with other women can overwhelm you. You may have left your house feeling pretty, but blonde, mini-skirted, Victoria's Secret models seem to come out of nowhere.

The truth is, a night out can bring out stressors both women and men may feel too afraid to confront.

With this seemingly huge choice of women, you may think the guys have it easy, but frequently, they feel paralyzed with approach anxiety from the last woman who rudely shut them down.

So, after another night of witnessing this phenomenon, I knew it was time for a matchmaker intervention. Implement these seven secrets, and you'll be the one manning the line to your heart:

Although it may not feel like it in the moment, there will be zero competition when it comes to whoever your man is. He may notice other women as you notice other men, but he'll still choose you.

But the only way he can find you is if you are yourself. If you try to dress and act like other women, he'll fail to see through the camouflage.

And really, you'll only be happy with him if you're honest about what matters to you.

Love your body for how precious it is, and dress to reflect that.

It is a common misconception that women who wear less attract more men.

Yes, men are visual creatures, but some men enjoy it when a woman leaves some details to the imagination. (But ultimately, you make the call on how you feel comfortable dressing.)

For first dates, I always recommend wearing a black, form-fitting dress with nude heels that elongate your legs.

A man's worst nightmare is a group of pretty women chatting in the corner. Talk about intimidating. Approaching that group would basically be a suicide mission!

Men will rarely approach women in groups because, if you turn them down, their rejection will be public.

Men will rarely approach women in groups because, if you turn them down, their rejection will be public.

So if you want men to approach you, stand by yourself. Leave your group, and walk around the room for a bit. Say hello to people, ask where the bathroom is or get a drink alone at the bar.

I even recommend going to events by yourself completely because it forces you to socialize more. Feel free to take a friend, but make sure she knows your goal is to meet new people.

Whenever I'm asking a bachelor what he's looking for, he usually says he wants a woman with a nice smile.

I totally get that RBF is a disease that plagues many women, so you will need to practice smiling more and focusing on the positive. It will improve your mood and attract more men.

A genuine smile softens the face and makes you look more inviting and approachable.

Be kind, even if he's no Ryan Gosling just yet. It takes a lot of courage to approach a woman, and I recommend rewarding a man's efforts by politely talking to him, even if it's only for a few minutes.

Other men will probably notice your friendliness and muster up the courage to talk to you as well.

And don't be afraid to work the room a bit. Feel free to start conversations with men and woman. Even if you don't score a date, making new friends is never a bad thing.

At Matchmakers In The City, we have a two-drink policy on dates, but if you're anything like me, it's totally possible to get tipsy after one. You want to make sure you remain coherent because you never know who you'll meet that night.

Although you may feel tempted to drink more to calm nerves, stay within the range of one or two drinks. That way, you'll have full control over your actions in any situation.

Often, women who intimidate men with their beauty and brains think they need to dumb themselves down to score a guy.

Unfortunately, they try to counteract their intimidation by lowering their standards and acting out to receive attention, which only increases their loneliness.

Rather than diminishing your true beauty, let it shine.

And most times, the men attracted to this kind of behavior are the men women should run from in the first place.

Rather than diminishing your true beauty, let it shine and continue to be the best version of yourself, even when you're on a night out.

After all, the main secret to getting him to approach you is this: Be approachable.