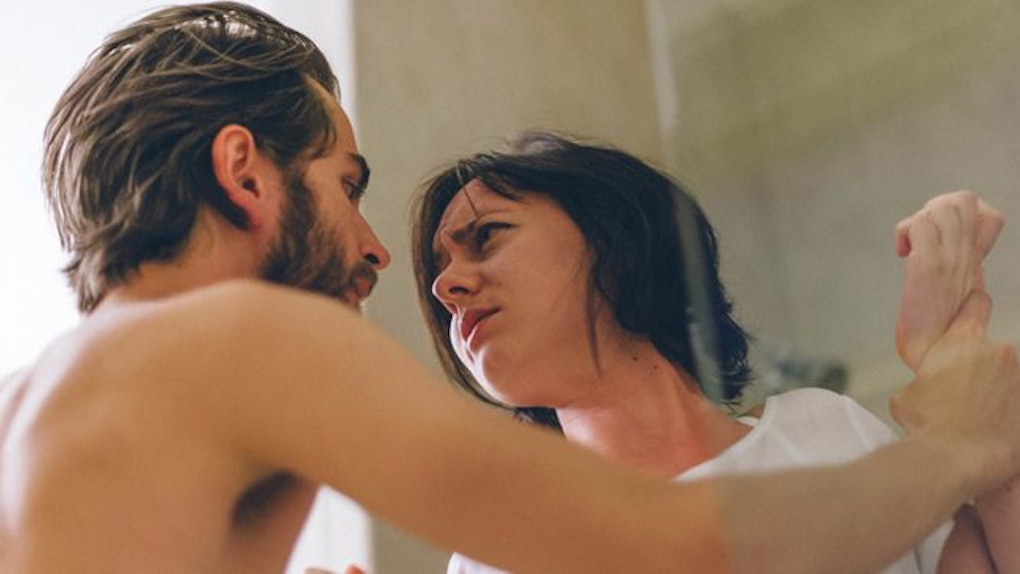 As much as I would like to say it's not true, my dating history is littered with toxic jerks. Emotional manipulators, cheaters, and even a rage monster we will call "Matt." Now, this was back before I knew to look for warning signs of a toxic relationship, so I was breezing past all the red flags waving in my face — until the cops showed up one night.

Matt and I had been dating very casually. Honestly, I wasn't that interested in him, but he was fun — very much a Mr. Right Now. As time went on, he started pushing harder and harder for more. It had begun to get a little too intense, so I pulled back. The moment that Matt sensed this, he kicked into manipulation overdrive. He began demanding we spend more time together, insulting my friends, and expecting to know where I was at all times. When none of that worked, he tracked me down and kicked down my friend's front door because we wouldn't let him in. Things could have gotten really ugly, but someone had called the police and they arrived just as the door came down. Turns out, the cops knew his name. He had a history of violence towards women he dated, and when I say they knew his name, I don't mean his first name. They knew his full name... first, middle, and last.

After that, I was done. He wasn't though. He continued to call and harass me until I finally decided to move to another town. The last time I heard from him, he called me from jail sweetly asking me to come pick him up. I changed my phone number that day. And ever since, I have become a red-flag-spotting machine. Because the warning signs are there — you just have to be willing to see them.

Here are five signs your relationship has gone toxic and it's time to go.

1. Expecting To Spend All Their Time With You

We've all been caught up in that new relationship energy where all you want to do is spend time with your new partner (preferably in bed). But there's a difference between that early excitement and the expectation from your partner that it will never change. One is the honeymoon stage; the other is a loss of autonomy, which is extremely toxic and damaging to the relationship. Kali Rogers, founder of Blush Online Coaching, explains: "Having your own autonomy is so critical to not only your overall happiness, but for your relationship's as well."

In healthy relationships, both people need to maintain some individuality. If your life has become all about your partner, or if they expect that level of constant attention from you, then you are in danger, girl. "Being able to enjoy your own private moments with friends and family is essential to having your own identity and maintaining your independence while also in a relationship," Rogers adds.

2. Putting Down Your Friends And Family

Sure, your friends and family can drive you nuts sometimes, and your partner may react to seeing them make you unhappy. In fact, if they are supportive, they likely will have your back by taking your side, possibly even expressing frustration about them. However, if your SO takes an unexplained dislike to everyone you care about, that's a huge red flag. Particularly if that dislike becomes the basis for suggesting you spend less and less time with them.

Monica Parikh, of School of Love NYC, explains why toxic partners do this: "The goal is to isolate you from your support network, making you an easy target for emotional manipulation and abuse." If your partner puts distance between you and your support system and takes their place, it's much easier to control you. If that sounds scary, that's because it is. Be very wary of anyone who wants you to make your life all about them.

3. Demanding Your Passwords And Checking Your Phone And Email

My partner and I have most of each other's passwords. It's something that's just happened over time for the sake of convenience. Like, “Hey, I need to order some more Q-tips. Can I get that Amazon password?” But it was never something either of us demanded as some proof of trust or rite of relationship passage.

If your partner demands all your passwords, it means one of two things: 1) The trust in the relationship is broken and in need of some immediate rehab, or 2) They are trying to control you. Parikh confirms this: "A controlling partner may feel entitled to have access to your email, phone, or internet history.” Toxicity level = 100 percent.

Jealousy is a tricky one because at first, it may feel a bit good for your partner to get a little jealous. Maybe you think it shows they care, or realize they don't want to lose you. But jealousy is noxious, and it only takes a little bit for your relationship to turn into a toxic waste dump because jealousy usually goes hand in hand with control and manipulation. "It creates an atmosphere of walking on eggshells and limits autonomy, which should be sacred in any long-term relationship," Rogers explains.

Jealousy is not a compliment, and if your partner has the habit of getting suspicious and resentful of the slightest thing you do, your relationship is dangerously unhealthy.

5. Blaming Others When They Are Upset

There's a little thing I want you to know about and it's called “gaslighting,” and it is the preferred tool of toxic manipulators the world over. Have you ever been in a fight with your partner, when they are clearly in the wrong, but suddenly you start thinking, “Wait, am I crazy?” Congrats, you have been gaslit.

What's so insidious about this habit is that it can be incredibly subtle, “For instance, if a person in a relationship feels hurt by another's actions, instead of apologizing, the partner might instead say, 'You're just sensitive' or 'You never understand what is going on in front of you,'” says Rogers. See, so tricky. It immediately puts you on the defensive and undermines the validity of your emotions and experience.

If your partner is a gaslighter, Rogers offers some advice: “It's a highly manipulative tactic that should be called out immediately, and if used frequently, it's grounds for terminating the relationship.” Agreed.

Do any of these habits sound familiar? Then you know what to do.