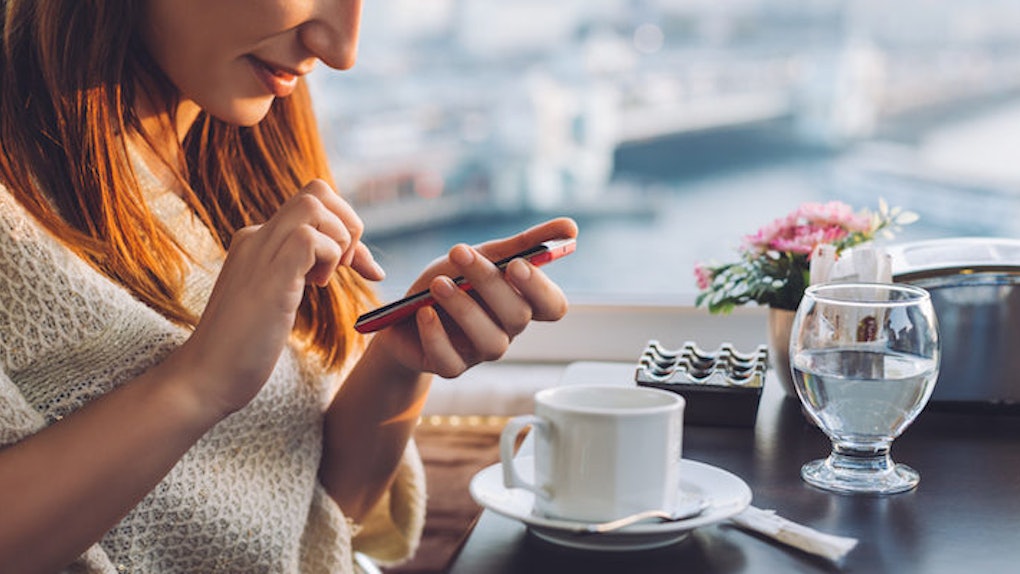 I looked down at my phone to find these words. It was a text from a guy I had met in the park a few weeks prior, accompanied by a picture of him dressed as what appeared to be a creative combination of Kanye West and a martial arts instructor (I later found out he was, indeed, dressed as martial arts Kanye, and Halloween came early for him. But I digress.)

Anyway, what was I talking about? Ah, right. The "good morning" text.

Seeing as I’m single AF (and haven’t gotten a text like this in -- oh, I don’t know -- maybe five years?), I guess you can say I was a bit surprised to receive a message of the like.

But it wasn’t just shock I was feeling; it was dismay, too. I’m not going to lie: Those two little words completely threw off my morning, and my day, and the rest of my week, for that matter.

It's the context of the text that's baffling. In today’s world, is a text like that normal? Or is it just straight-up crazy?

I mean, who’s to say getting a "good morning" text from a guy you haven’t been dating seriously isn't too chivalrous for its own good? Was he digging himself into a hole by pressing "send," or was I just being an a-hole for laughing at him? Am I supposed to run from it, or am I supposed to embrace it?

Millennial dating culture has me questioning everyone and everything. A message that probably traveled all the way through cyberspace with the sole intention of brightening up my day and throwing a big ol’ smile on my face makes me wince and gag instead.

I ultimately decided to cut ties with martial arts Kanye dude because his eagerness scared me away. I think it’s safe to say that we’ve become, dare I say, impervious to sweet gestures and meticulously worded texts. RIP, martial arts Kanye.

Behold all the thoughts that go through your head when you get your first ‘good morning’ text from a guy in FOREVER:

3. OK. Take a breath and regroup. Sh*t like this is usually too good to be true.

4. This guy is either an axe murderer, a stalker or, worst of all, the love of my life.

5. I better not tell everyone about him because I’m going to jinx the hell out of it.

7. I’m doing it. Gotta send it to ma ladies. Need their input.

8. What? You guys are turned on by this?

9. Jesus, guys, keep your panties on!

10. I feel like they’re freaking out over him more than I am.

11. Should I start planning my future with this dude?

13. He’s a unicorn. SERIOUSLY, NO ONE DOES THIS ANYMORE.

15. Ugh, I think I liked him for five minutes, up until he said, "Good morning."

16. Well, that was a fun five minutes of my life I’ll never get back.

17. Does this mean I should expect "good night" texts, too?

21. Is this purely a sexual thing? Like, did he just wake up with a hard-on?

22. How many other girls is he even sending this to?

27. I am officially jealous.

28. Did he even just wake up or has he been up for hours?

29. I bet he woke up, went to the gym, chugged a protein shake and *mowed his lawn* (if ya know what I mean) already.

32. I AM NOT MAKING PROGRESS HERE.

35. Does this make him my boyfriend?

36. If he isn’t, is it even appropriate for him to be sending me a text like this at this point in our “relationship?”

37. I don't think so. It's blatantly inappropriate.

39. Y’know, this all seems way too easy. It takes approximately zero effort to send a two-worded text; he isn’t going to get laid just yet. Nice try, idiot.

41. What was I complaining about again?

42. Maybe I should ask my dad what he would do if HE were martial arts Kanye.

43. Nevermind, my dad wasn't alive in the age of cell phones. So that's out.

47. Maybe in another lifetime, if I weren’t so afraid of commitment, I’d have taken him up on his offer to go out.

48. I just hope the gods don't reincarnate me into a squirrel in my next life for being such a bitch.