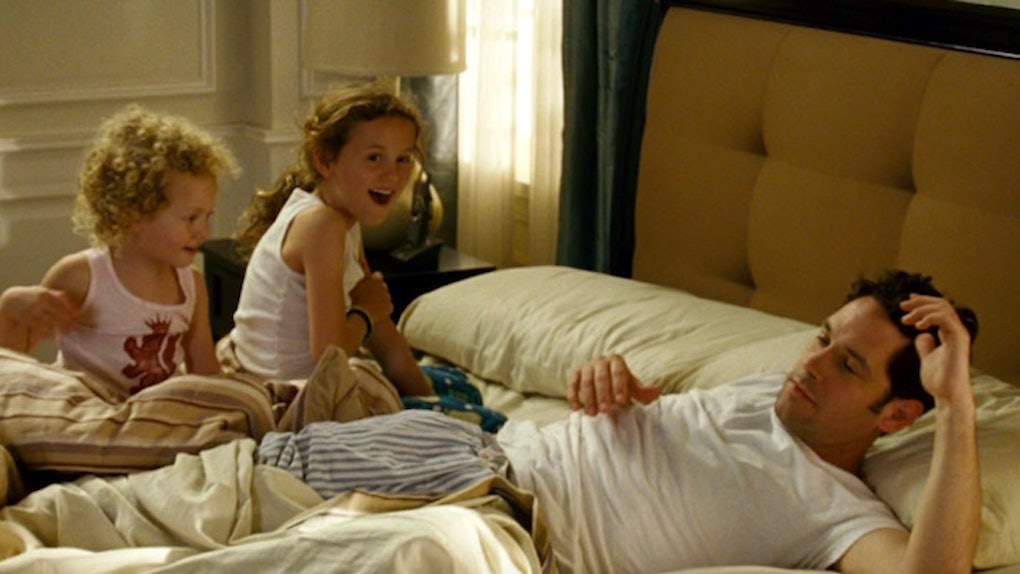 Dating A Man With Kids? 7 Things You Need To Know

You've probably realized by now life isn't all rainbows and butterflies. And if you haven't yet, you soon will. By the time you reach you late 20s and early 30s, the baggage starts to add up.

As you get older, you begin to accumulate stuff. Not more expensive kinds of face cream, that's just physical baggage. The emotional shit weighs much heavier. Your experiences, good and bad, start to take their toll.

By the time you reach 30, you pretty much accept that you're screwed up beyond repair and that any potential mate is likely to be as well.

A complicated divorce? Baggage. Death of a parent? Baggage. An inconceivably manipulative ex that left him with an inferiority complex? Let's not get started on that one.

If humans were half as efficient as machines, we'd erase the hard drive and start fresh. But that wouldn't make us human. And as much as we'd all love our romantic partners to come without complications, the chances of that happening are close to zero.

While therapy, yoga, mindfulness and wine can cure most of the above nuisances, if you're dating a man with kids there's not enough chardonnay in the world to make it go away.

So be sensible, and don't launch headlong into your new relationship with Pops until you've thought it through first.

Here are seven things you need to know about dating a man with kids:

1.  You'll Never Be His Top Priority

Having kids changes people in ways you'll never understand until you have your own. This love is totally unconditional.

Basically, your man has experienced a more intense kind of love than you and they were here first. This means you'll never be his top priority.

If you're used to your boyfriend putting your needs first, prepare yourself. He will leave you high and dry because his kid is complaining of a headache, or his ex can't pick her up from school. On her day. Just when you've had a Brazilian.

Speaking of exes, you'll never be rid of his. You can't because there are soccer practices to organize and parent/teacher conferences to go to. You'll probably feel like he talks to his ex more than you and she might even haunt your dreams.

You can't get mad about it because he'll just pull out the kid card, so try to stay calm and keep your pangs of jealousy under control.

3. You Have A Constant Spy In The House

Dating a man with kids, or living with him, is like having a constant spy in the house. Before you know it, the fact that you burnt the enchiladas last night will go viral.

Your fights will be documented and dissected by his ex and her cronies at the gym. And forget about walking around naked or having sex when you want to.

You're living in a prison of your own making. If you don't want to be labeled as a child molester, keep your clothes on at all times, even in the shower. You will be burst in on in the bathroom and giggled at, and have your boobs compared to Mommy's.

4. You'll Have No Authority

Having zero authority over his kids won't seem like a problem in the beginning. After all, they're not your kids. As you marvel over this new world of parenting, all you'll care about is getting them on your side.

As the relationship progresses and you spend more time together, it's hard to keep up the charade that you're as enthusiastic about his children as he is.

Prepare yourself for the moment you try to teach them manners or ask them to turn the volume down. You'll swiftly and sharply be reminded that you're not their mom. You pretty much have no say over the remote control in your own home.

As long as they can play the “you're not my mom” trump card, your opinion will never count. Of course, you're still expected to provide dinner, buy them things, babysit when you really don't feel like it and get emotionally involved.

You know when your girlfriend puts you in the impossible position of answering honestly about how she looks in her new dress? Remember that now. Don't be tempted to give your opinion, even when it's asked.

6. Your Vacations Will Never Look The Same Again

Expecting your vacation to be romantic and full of moonlit walks on the beach is just wrong. It won't happen when you're with a man and his children.

Your vacations will suddenly turn into kids' camp. Instead of lying by the pool, you'll have to be in it, participating in constant water sports or risk the backlash of moody children.

7. People Will Mistake You For The Mom (You'll Secretly Like It)

It's pretty cool when you're out and people praise you on your beautiful children. It can be fun playing mom, knowing that you can give them back at the end. But if you secretly like it, watch out.

It won't be long before all that role playing will make you ache inside and want kids of your own. When that happens, the loving, doting father you're dating will declare how much he hates children and how he doesn't want another.

You can't help what the heart wants, so if you fall in love with a dad just please remember this: Spend more time acting like the adult than trying to best friends with the kids, and don't give up on your friends or social life.