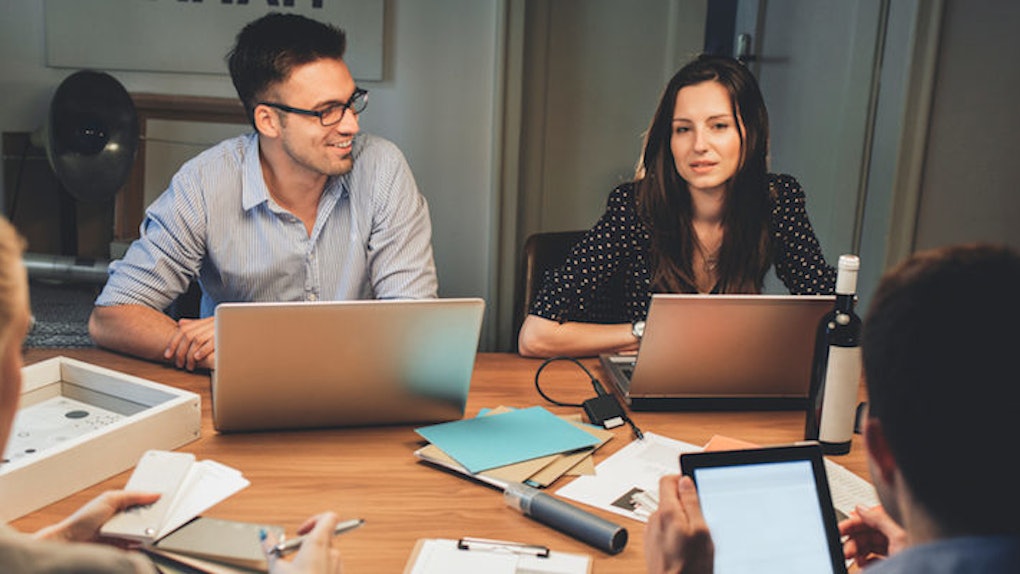 Finding yourself romantically involved with someone you work with might seemingly be ideal. You share the same workplace, you understand one another's roles and time commitments and you always get to see each other. Not to mention, there are various qualities you might have in common, as your boss saw something unique in the both of you and hired you to the same team.

You're on cloud nine, until harsh reality hits. The truth is, you actually aren't compatible with your new beau. Awkward.

The interactions that once made your heart skip a beat are now gut-wrenching. Your excitement for this person showed too obviously through your eyes, like the lustful heart-eye emoji. But now, you'd much rather not see this person at employee meetings because you just think about how he or she used to sweetly kiss your forehead in the staff kitchen.

You learned this isn't the person for you, only under the stickiest circumstances. You share a place that requires your best efforts, not these emotional distractions and discomfort.

See, work can be a place to meet romantic potentials. But when you realize the chance you took didn't go as imagined, you need to gather yourself and look past this displeasure.

On three different occasions, I chose to date co-workers. None of the three worked out, but I did gain a few lessons from them all. They were great guys in their own ways, and each relationship ended for its own reasons.

The first two occasions led me to bitch out. After the third, I quit my job because I really just wanted out. The third was different because I actually valued the job.

But first, give yourself the credit you deserve because you took the chance to make yourself vulnerable in a risky situation. You pursued it because that someone meant that much to you. That's courageous.

Your boss may have been against it all along, and it was probably frightening. But, it was just as necessary. Besides, it's nice to have felt those good times instead of not at all, regardless of how it all ended. Here is how you can survive work with your ex-fling of a co-worker:

1. Release yourself from anger for the person.

You don't need to be in an angry black hole during the same hours you are supposed to be performing at your job. You still need to be your best.

Take responsibility for your choice to do what you've done, and walk through the doors with your head high. Maybe even smile at that person. Rather than seeing this as the worst situation ever or being fake toward him or her in the hopes that things will eventually neutralize, realize this: This has now become your chance to respect this person as a co-worker.

In this case, you gain new respect for yourself for not immediately dismissing the person for how he or she may have hurt you. Taking the time to actually see through the haze for the good left in it does wonders for your character, and it probably helps you mature as well.

2. Give yourself the time to sift through the sh*tty feelings.

Embrace every aspect of how good it was, how bad it was and how temporary it was. It didn't last forever, so you don't have to live through these feelings forever.

Fully go through how sh*tty it feels until you willingly don't have space for it in your head anymore. Give yourself a time limit until you fully remove the situation from your mind.

Exchange it for something that works for you. Continue being your best version of yourself at your job.

Don't do this to the point where you're trying hard to create an image, especially not for the person who broke your heart. Keep it authentic.

Being fake is desperate. The only one participating in trying to get his or her attention is you. It just ends up distracting you, and others around you can probably see right through you. It's not worth it.

Work on what you like. As you get better, the fire from your passions will naturally seep through you. That kind of attention is worth it.

There's a reason they say not to date within the workplace. Things have the potential to get messy in a place that needs to be clean, tidy and professional.

"Don't sh*t where you eat" is a pretty rational notion. But in case you can't contain yourself, don't fret. Sh*t can be cleaned up.