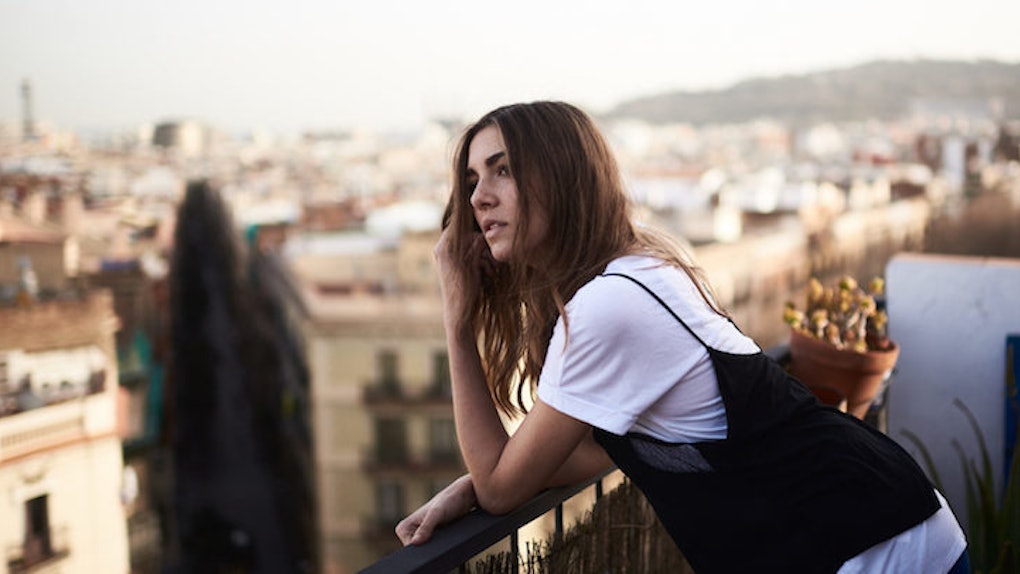 If You're Struggling To Believe In Love, This Is What You Need To Remember

“Don't waste your time on someone who treats you like I did,” were the words I heard from a guy who couldn't bear to look at me anymore. Our story was flawed and messy, and it had a deadline from the start. We were impulsive teenagers. We never knew what we wanted, and we fluctuated back and forth between saying, “I love you,” and “I'm leaving you.” But as I watched him drive away, I wondered where my love had gone, or perhaps if it was ever even there at all.

I've spent the last two years thinking my problem was that I didn't believe in love. The more I said it out loud, the more it sounded like just a bluff. I've said “I love you,” a lot in my short life, mostly because I felt like I should be in love, or I just wanted to be. I felt as that once you passed a certain time frame of being with someone, you automatically have to say those three words. But each and every time I said it, I felt trapped.

I couldn't help but think is this really it? Is this really the feeling people spend their lives longing for? “Love” just didn't seem worth the struggle it takes to find it. I've seen the people in my life want love so badly that they force it.

I watch as they get so caught up in something that's making them miserable just because they can't even picture life without that person. They are caught up in constant text messages, excessive involvement in each other's lives and ridiculously high expectations. All the while, it's all justified by one little word: love.

But at just 20 years old, I'm a sophomore in college, and I have no idea where I'm going to end up. How can I condemn myself to believing that love never ends well? I can't help but wonder, why am I the only one who seems to feel this way?

It wasn't until I saw him again that I realized my problem wasn't really that I didn't believe in love. As clichéd as it is, I'm like those people who have their "spot" they go to when they need to think about something. I was back home in Pittsburgh, and I decided to revisit my spot. He didn't know I was coming or even that I was home from school. Yet that's where I found him, sitting there like he used to when we were together.

We talked for a while; our conversation was neither happy nor sad. But as he smiled at me for the first time in a long time, it hit me: How could I not believe in love when this guy let me go, not because it was the best thing for him, but the best thing for me?

Our problem doesn't lie with the existence of love itself, but in our feeling that we are incapable of giving it. We end up feeling guilty when we can't return it, confused about why we can't and eventually reject the idea altogether.

This is the part where I tell you how to fix yourself, right? I'm supposed to throw together some clichéd quotes, maybe reference a Nicholas Sparks book or two and then you continue on with your life. But I feel like I owe you more than that.

Maybe love isn't as common as we think it is. Maybe we shouldn't search for it as hard as we do. Maybe we invest too much in people who are temporary in our lives, instead of forming real connections and making memories in our friendships that are not defined by the number of months we've been together.

My advice? Stop trying to fix yourself. Stop worrying about if it's there or why it's not. Think less, and go on more adventures. Stop pretending you don't have feelings because trust me, you do. Stop guarding yourself; get your heart broken. Act on your impulses; tell a stranger at the bus stop a story about your life.

Stop looking for love in everyone you meet, or don't look for it at all. Get to know people, and I mean really get to know them. Invest in the things you love, and do more of them. Because honestly, what's the worst thing that could happen?

This article was originally published on Unwritten.