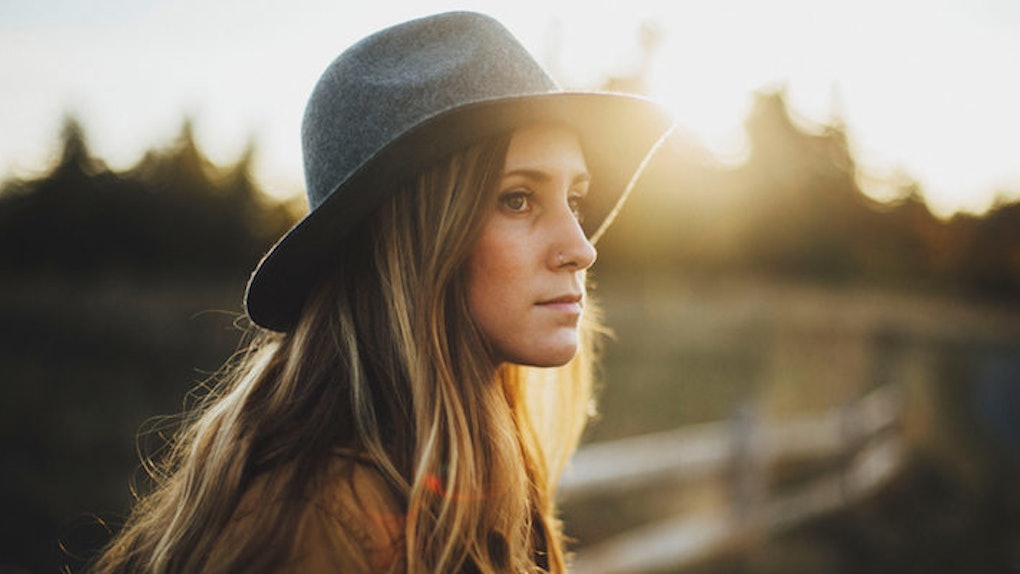 The Struggles Of Dating When You're Clearly Not Over Your Ex

In April 2012, I met a boy in the middle of a rainy day, on a corner of a busy street. Little did I know the moment he tapped me on the shoulder to say “hello” would be the moment that would change the course of the rest of my life.

In January 2013, the boy and I made the decision to see each other, and only each another. The bond that began as a steadily-built friendship grew into a quick-blossoming romance. He became someone I wished I’d met sooner, and one I knew I’d hold in my heart for that fleeting moment in time and forevermore.

He was my first love. But I also wanted him to be my last.

In December 2014, after a tumultuous, euphoric-when-it-was-good-but-miserable-when-it-was-bad, on-again-off-again romance, I ended it with the boy -- not because I no longer loved him, but because I was afraid of just how much I did.

One year later, the boy hopped a plane to California and didn’t look back. We were no longer together, but that didn’t make his departure any less painful.

Now, three and a half years after we first met, he is still the first thought that crosses my mind when I wake and the last thought I take with me to bed. He got away from me, but he never really got away from me.

Everyone has that someone who got away -- the guy or girl who will always be “the one.” Maybe he came into your life sporadically, or maybe he was there all along, but you never forget him. He makes it impossible to be forgotten.

After this love with “the one” dies, you are hesitant to begin a new one. You complain about having no luck in love, but you don’t do anything to change that. You won’t go out because you’re caught in your own head, and when you do go out, you confront potential lovers with a caged heart.

Your life is a series of one waiting game after the other: to the next text, call or by-chance reunion with the one who got away.

Mistakenly, you believe your ex is your worst enemy. But he isn’t at all; you are your own worst enemy. You are the one holding yourself back from developing a bond with a stranger who might one day turn into someone you become quite fond of.

And this is the unfortunate ex paradox: the idea that we live our lives holding out for someone imperfectly perfect for us.

But our exes are called our exes for a reason. It’s because things didn't work out with them, and we've got to learn to move on from them.

Some of us, however, cannot. Some of us stifle our love lives by clinging to the fantasy that the great forces of the universe will push us back toward each other because we were once made for one another.

Even though the boy I love is gone, I can’t help but hold on to the hope that one day -- whether in the near future or someday far, far away -- we will end up together.

But there is danger in waiting for a life with your ex, a life that will never come.

You look for old flaws in new people.

My ex had imperfections. On their own, they were of no consequence. But as a whole, they represented something far more than just flaws in character; they were vices I fell back on. His imperfection was an armchair I’ve since learned to rest comfortably on.

These flaws are what made my ex, my ex -- and they're the flaws I want my future lovers to have, too.

I've convinced myself that if I search for my ex's flaws again in new people, I can kind of recreate him. I’ve taken the bad habits I’ve seen in the love I once knew and imposed them tirelessly onto loves not yet cultivated.

But everyone pales in comparison to my ex.

Sadly, retrospect is always clearer than reality. To rely on an outdated image of the man we used to love is to lead with a naïve head and a faint heart.

You dwell on your ex to distract yourself from a much deeper problem.

There are fewer realizations in life more difficult than coming to terms with the fact that you’re focusing on lost love as a means of distraction.

My ex is a Band-Aid for something I feel I am missing within myself: his old soul. His youthful vitality. His astronomical, incomparable, unquenchable appetite for life. These were all qualities I envied, qualities I cherished so much that I wanted to steal them from him and keep them for myself.

You can’t give your all to someone else.

Giving my all doesn’t simply mean saying “I will.” It means showing I will.

I can’t move on by simply telling myself I will. I can repeat the words all I want, but that won’t make them true. I’ve got to both take action and give it time.

Until then, though, I’m sending red-flag energy to everyone I meet, everyone I like, everyone I date -- and I can hardly even recognize I’m doing it.

As much as I wish my very own willpower could be strong enough to heal me, time is the only real remedy. I cannot give other people an honest chance to enter my life until I give myself an honest chance to move forward from the one who's keeping me back.

A moment spent wishing your ex will come back to you is a moment you'll never get back.

I have a picture of what my life is going to be. My ex and I are together. My heart has swiftly healed; I’ve forgiven him for breaking it. Our future is a reincarnation of the good parts of our past. I live my present biding time until I bump into him again.

And maybe every moment spent wishing my ex would find his way back to me is nothing more than a wasted moment I'll never get back.