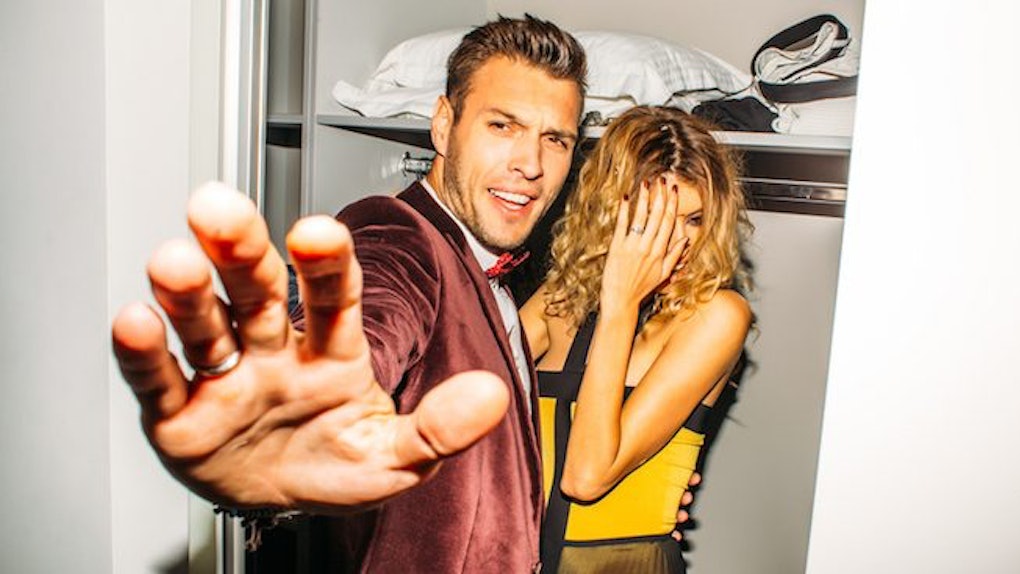 4 Signs You're The Side Chick In Your Relationship

I have accidentally been the side chick in relationships not once, but twice. Neither time was on purpose, but both were because I couldn't recognize the signs you're the side chick, so I just went along thinking I was exclusively dating a guy who just wasn't that into me, like I always do. Not to brag, but that's kind of my "thing."

In my first relationship, I dated a guy who, despite us seeing one another for nearly half a year, never posted a picture of me on social media. We also never hung out during the weekends — only dinners on his way home from work — and he'd never sleep over, claiming various excuses, like having a dog, needing to finish a project, or having to get up early the next morning.

Fast forward to me finding out that I was absolutely not this man's girlfriend, but I was actually the woman he was seeing on the side when the girl he was very much in a relationship with was unavailable. How fun for me! It's amazing what we will settle for when we don't have boundaries or our self-esteem is low, which, at that point, mine was.

In my second relationship, my "boyfriend" was insane about the privacy of his phone and computer. He would clear his search history incessantly, never allow me near his Facebook, and delete all of his text messages every single night. He would also change his iPhone password with frequency, so I couldn't figure out what it was, because, yes, I absolutely did try to break into it a few times. But so what? I mean, can you blame me? It turned out that I was just the side chick in that relationship, too. Again, I didn't see the red flags that were waving right in front of my face.

So I asked matchmaker Meredith Golden about some undeniable indicators that you're the side chick in the relationship, and they're pretty recognizable, to me at least. Ouch.

1. You Never Get Big Date Nights

If you're not being taken out on the weekends, then someone is. You know your partner isn't just sitting home alone, twiddling their thumbs, and watching Planet Earth. It would be nice to believe that, but it's not true.

"It stinks to be the side chick when you want to be the only chick," Golden says. "An obvious sign is always an after-work weeknight date, and never a Friday night or Saturday night date. He reserves these prime times for his main girl."

If your "partner" somehow goes MIA every weekend, is suddenly unavailable, or is frequently "very busy," then usually it's because they're busy with someone else. However, if they have time for you during hours when it's easy to make excuses (i.e. they could also be at work or at the gym), then you might be a side chick in their life, not their main priority.

2. They Never Spend The Night

I've dated a few guys who never spent the night, and it always came down to one thing: We absolutely were not exclusive. Golden explains, "Not spending the night is also another sign. It's hard to sleep over because he's probably going straight from side-girl date to main-girl apartment to spend the night."

Additionally, they probably need to say goodnight to their main squeeze before going to bed, and they can't exactly do that when they are lying in bed next to you. If you're a victim of a drive-by banging, then you're probably not the only person in your partner's life, right? It seems self-explanatory, but we make excuses for people we care about.

3. They Are Shady With Their Phone

Like I said, I once dated a guy who would delete his ENTIRE phone history at the end of every night. What was that? What the hell could he be doing? When I asked him about it, he just told me that he liked having a fresh start every morning, and that a clear phone aesthetically looked better.

Golden explains that your partner's phone activity can be another indication that you might be #2 in your partner's life. Red flags might be "stepping away from table/bar/activity to have a conversation privately." She continues, "Maybe he turns his phone down, so you can't see the texts coming in. And you probably don't have access to his phone, but I suspect all your text exchanges are deleted immediately."

That guy who wouldn't let me near his phone? Well, it turns out he was cheating on me! LOL! The "delete all your text exchanges" thing is very real, folks! Be careful.

4. Their Time Is Limited

"Another sign is he only sees you once a week," says Golden. "He has his fun with side girl, but [he] gives main girl [the] bulk of his time."

If you think you might be the side chick in a relationship, there's no reason why you should settle for crumbs. You deserve better than that. If you need answers, then ask questions. And as always, trust your gut. Intuition is real, especially when your relationship might not be.