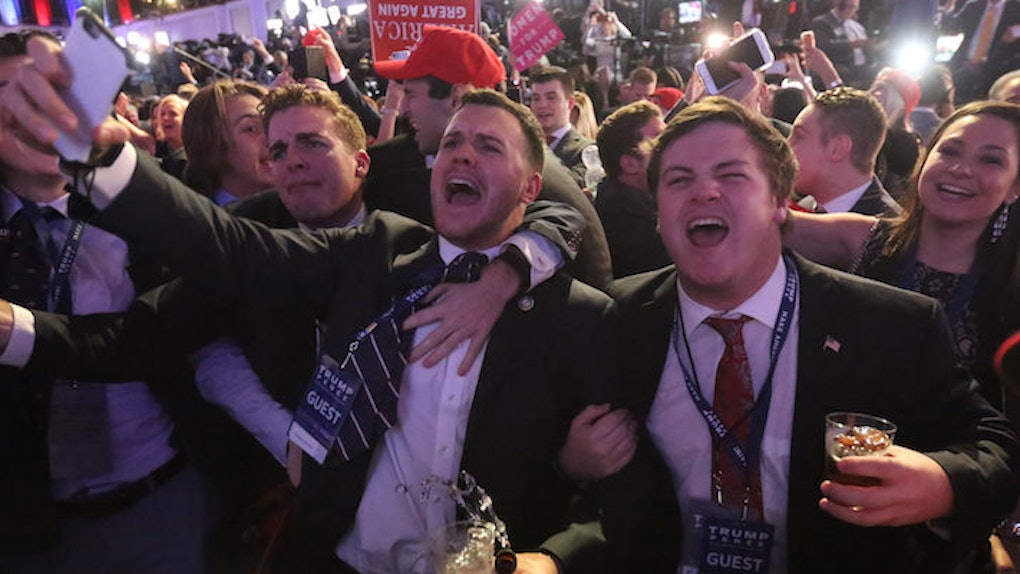 7 Signs Your Crush Is A 'Yuge' Trump Supporter

Finding the perfect guy is clearly no easy task.

Sometimes, you think you've found your match, but then, he turns out to be a hoarder, a recently released convict or even worse — a Trump supporter.

So naturally, you need proper protection against falling for a guy like that. If your crush exhibits the following signs, head for the hills because your alleged dream guy likely voted for Donald Trump:

1. He reduces cultures and nationalities to menu entrees.

Have you noticed the only Mexican food your crush eats is a taco bowl at the cafe or that his Snapchats of said taco bowl usually contain some variation on the caption “I love Hispanics”?

This kind of thing isn't funny. It's a huge red flag, especially if he also has a habit of complaining about immigrants taking jobs from American citizens.

2. His sexual objectification knows no bounds.

Remember that time you were listening to Taylor Swift's album in your car, and your crush admitted he thinks she's really sexy? And then, he let slip that he hopes he has a daughter as attractive as she is one day.

Guys may not be able to help whom they're attracted to, but if your crush doesn't see a problem with sexual objectification, especially of the women he's related to, then he sounds like a Trump fan.

3. He told you to quit your job when you were harassed.

You signed on to your job to make cappuccinos, not to deal with your manager's inappropriate comments to you. You hoped your crush would come to your defense, but instead, he shrugged his shoulders and said you should look for a different job.

If the scenario played out this way, then your crush is likely a Trump supporter, and you're barking up the wrong tree for sympathy.

4. He thinks the planet is just “getting warmed up.”

All you did was mention that your parents were getting solar panels installed, and your crush blew up and called them victims of a Chinese hoax.

He also has a habit of lecturing you on how un-American it is to protest drilling and mining initiatives that, according to him, could rejuvenate the US job market.

It's normal for a guy to daydream about his future wedding and what his future wife will be like. But it's not so normal when he indicates he's also dreaming about the wives he'll have after separating from the first.

Seriously, if your crush has talked about the 22-year-olds he hopes to sleep with when he's 45, in the middle of his second divorce, lace up your shoes and start running from that Trump supporter as fast as you can.

6. He can't see the extent of his own privilege.

It's stressful enough when you run into your crush when you're out with your family, but it's even worse when your crush compares his boarding school experience to your grandpa's tour in the Vietnam War.

Any guy who actually compares his polo-and-khakis staple to a military uniform or his PE class to boot camp is most certainly a Trump supporter.

7. He suggests that a woman's body is her greatest contribution to society.

You really want to travel the world and contribute to our planet, but you can't decide how best to accomplish it. And you're not getting much support from your crush on that front, either.

When he saw you looking at an application for the Peace Corps, he suggested you, instead, apply for the Miss USA pageant. And even worse, he tried to argue that you could do just as much good sharing your bikini body with the world as you could distributing vaccines to those in need.

Sorry, but your crush is, without a doubt, a Trump supporter.

Unfortunately, finding out the guy you like is a Trump supporter is like a shot through the heart. However, it's better to find out now before you find yourself walking down the aisle as wife number one.