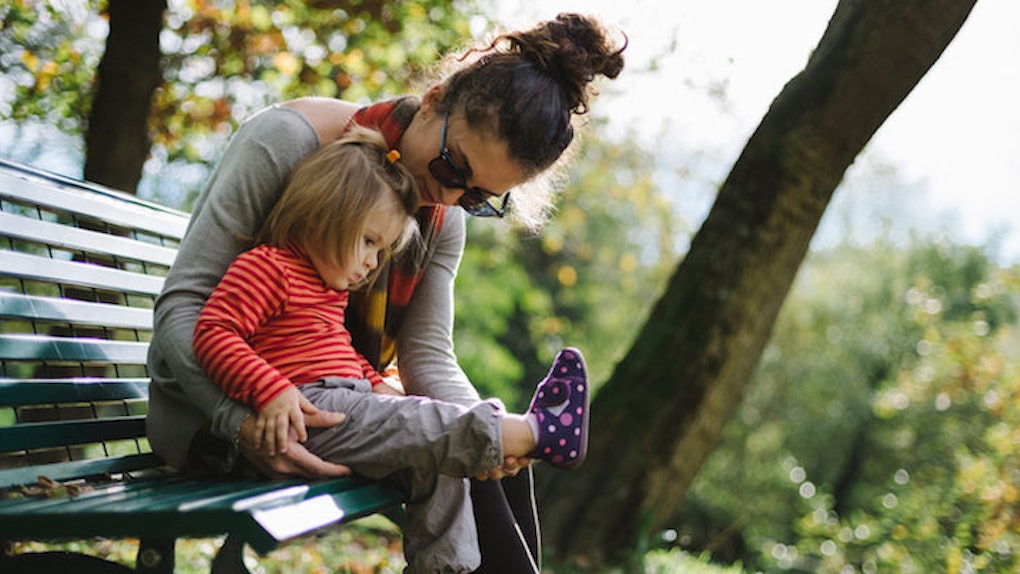 10 Signs The Woman You Love Will Make An Amazing Mother

If there really is a God up there, I don’t think he chose to instill “beauty” in this fashion by a mistake. I think it’s deliberate. I believe that beauty can wear a variety of different gowns, and it’s up to us, individually, to tailor it from there.

I see constant beauty in my life, but beauty fades – and when you’re looking for someone to settle down with for the long run – it would be in your best interest to seek out the type of beauty that’s enduring.

I hate to break it to a lot of you, but looks fade. Physical beauty has an expiration date, regardless of what some plastic surgeon might try to sell you. The wisest of men will instinctively find beauty in other places – places that don’t sag with age.

I might see a woman step into a room – shaped like a dollar sign – draped in designer couture, and think to myself, “God she’s a showstopper.”

And, often times, I’ll find myself doing a double take afterwards, only to realize maybe it was the way the Céline dress hugged her curves that really stopped the show – or at least my eyes.

I mean, think about your own mother -- and probably your first love. The beauty you see in her doesn’t come from libido, whatsoever, but from her character – and it will never fade. That’s the type of beauty you should chase in your own love life.

Not only will you find a woman who will remain attractive without end, but it will also foreshadow her ability as a future mother.

If you’re at a place in your life where you’re thinking long-term, there are certain qualities to catch sight of. Here are the 10 signs that a woman will make a great mother.

You never have to worry about her. From highs to lows, all the way back to even greater heights, she’s been by your side. You’ve never even had to doubt it.

Your greatest achievements have traces of her fingerprints all over them, and you know if it all goes down, she’ll still be down for you.

Loyalty is royalty, and the backbone of most human relationships. When it’s lost, none of the other virtues you also might have depended on will have any substance. Never take a loyal woman for granted. Trust is something that takes years to build and can vanish in the blink of an eye.

9. She doesn’t just listen so that she can speak.

There’s a difference between listening – genuine listening, and simply waiting for your turn to speak. Listening shows interest, it shows a level of concern, and it will often times speak louder than any string of words ever could.

8. She anticipates your needs before you have them.

You never have to tell her, she’ll just know. Whether it’s the morning of a big meeting, or the night of a big game, she’s always had the foresight to accommodate you before anyone else.

It shows she’s nurturing, and it also shows that she has the prudence to anticipate things before they happen – like a cornerback who can telegraph a quarterback’s pass before the ball comes out.

You love that she’s thinking about you, and knows what you like, and you love it even more that you never have to tell her to do it. Things are always better when you don’t have to ask for them.

7. She never goes to bed angry.

Everyone argues, especially people in relationships. Arguments don’t mean you're doomed or not destined to be together, they just mean you can’t agree about something. Trying to find a woman you’ll avoid bickering with will take forever, instead, look for one who works toward resolutions once conflict arises.

A woman who doesn’t harbor grudges will never go to sleep angry – and that will translate to constant forward motion in your relationship. It takes a great deal of maturity and awareness (of self, and the bigger picture) to set aside self-centered bitterness, and maintain positive energy for the benefit of the relationship.

And it’s not that she couldn’t have it, she just doesn’t need to. And you’re well aware of that fact. Ultimately, getting in that last word won’t prove anything – besides pettiness.

As a rule, people who are incessant over their pursuit of the last word usually allow their egos to grab the wheel and turn trivial matters into personal ones. While seeking to have the last word is not all that impressive, holding back on them for the sake of someone else’s feelings, and something bigger, is.

A lot of times, the things we don’t say will resonate louder than the things we do say. This is especially true with her. If you’re doing something wrong, she doesn’t have to tell you because you’ll just know. It only will take one subtle look  into her eyes.

Words can be sexy, but the sensuality behind body language can’t be replicated.

4. She always has something to teach you, and she’s always willing to learn.

I don’t know, there’s just something sexy about acquiring knowledge – and often it won’t necessarily have to be presented in the manner of a “sexy school teacher.”

When a person shows an interest in something, or a passion for something, that is authentic – it will always be an attractive quality for other passionate people.

Be on the lookout for a girl who takes an interest in something, even if it might seem mundane initially, and let her passions open your eyes to new things. In turn, do the same with her. Like I said, truly passionate people will always be tempted by other people’s passion – regardless of what it might be.

3. She’s great at making plans and even better at taking detours.

She’s assertive. She knows exactly where she wants to go – and how to get there – but if obstacles arise, she’s prepared to use alternate routes. This is useful for her career, but it’s also a great indication that she won’t quit on your relationship, either.

Life is all about unexpectancies. The most successful women don’t look to avoid them, but instead stay prepared to respond to them.

2. She’s comforting in just her presence.

You could be having the worst day known to mankind – it doesn’t matter. You know once the clock strikes 5, and it’s time to go home, you’ll be welcomed to a girl who erases all of it just by being with you.

Finding a woman like this will prove to be the ultimate comfort, and it will never require any effort. Even the times when you’re not with her physically, just knowing she’s in your life will a lot of the times suffice. That’s when you know you truly appreciate a woman – and should never take that for granted.

1. She makes you better.

Simply put – she holds you down. Words cannot describe the feeling of having that one girl who’s truly your better half. It’s a cliché, but clichés always emerge from truths. It’s impossible to simply go out and find a girl who completes you, but when it happens, you’ll know immediately.

And you’ll see it in your own day-to-day life, even when she’s not around. I’ve always said this: Girlfriends are good for the soul. When you have someone you grow to think about before yourself, that inclination will translate to other people too. It’s honestly a beautiful thing.

When one girl inspires you to not only treat her the best as possible, but everyone – including yourself – that’s rare. You’re probably pretty lucky.