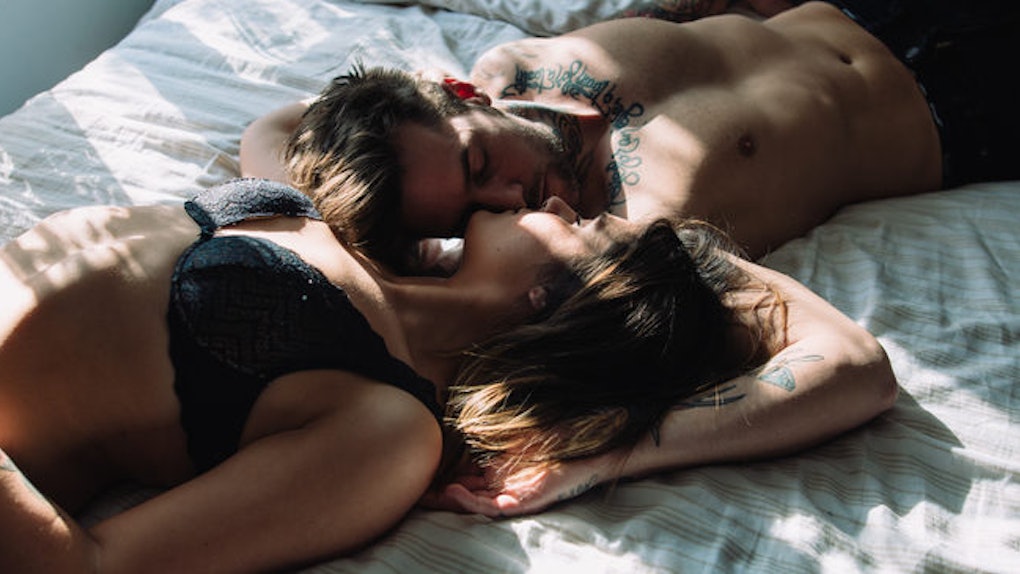 Have you ever heard that you can't get pregnant the first time you have sex?

I (and many others) heard this weird piece of advice when I was growing up. I never bought it — thank God — because it's illogical and crazy, but I realized it's not the only myth about supposedly "safe sex" going around.

The truth is, misinformation about sex abounds: It seems like everywhere we look, someone is giving us another dumb and incorrect piece of advice about sex. Safe sex myths are almost as easy to come by as cat memes (OK, maybe not that easy, but almost).

We did some digging and uncovered five pieces of information about "safe sex" that are wrong AF. Here, we debunk them all.

1. The Pull-Out Method Is A Good Form Of Birth Control

So, there's a lot to unpack here.

According to Planned Parenthood, the pull-out method is better than no form of birth control at all. That's because if you do it completely perfectly every time, it's effectiveness is around 96 percent. Not bad, right?

The thing is, almost no one does it perfectly. It's going to be really hard to keep every single drop of ejaculate fluid away from the inside of your body. So because we're human and fallible, the real effective rate for the pull-out method (the way people do it — non-perfectly — in real life) is about 73 percent. Way more bad, right?

The reality is, while the pull-out method may be better than nothing, it's not the best way to go when trying to protect against pregnancy or STIs.

2. You Can't Get Pregnant If You're Standing Up During/After Sex

This was one I hadn't heard before, and I had a hard time wrapping my head around it.

The idea? That if you stand up while you're having sex and/or stand up immediately after sex (to let the ejaculate fluid drip out), you won't get pregnant.

This one is, obviously, totally false. You can get pregnant if you have sex standing up, sitting down, on a boat, or in a moat (more on that later). And you can definitely get pregnant even if you stand up immediately after sex.

In fact, anything you've heard about a certain way to have sex to avoid getting pregnant is going to be completely, totally false.

Don't buy this terrible information. Use a real form of birth control, like condoms or the pill, instead.

3. It's Impossible To Get Pregnant While Having Sex On Your Period

OK, while I understand where this one might have come from, the reality is, it's still wrong.

Many people believe that you can't get pregnant on your period. I think this probably comes from some warped idea that a period prevents fertilization, but it doesn't.

Brief biology lesson: Every month, a woman's uterus develops a thick lining to prepare for a possible fertilized egg. If none occurs, the uterus sheds that lining, which is what a period is.

While it's true that you're less likely to get pregnant while you're on your period, the odds are certainly not zero.

So if you're having sex on your period, make sure you still use protection.

I also hadn't heard this awful myth (thankfully), but here it is: Douching or peeing after sex prevents STIs.

The idea here is that by "clearing out" your insides, you can prevent an infection. And it's a complete and total myth.

While peeing after sex is a good thing to do if you are prone to urinary tract infections, it won't do anything to help protect against STIs.

Not only that, but douching after sex could potentially make things worse: It could flush out the good bacteria that are supposed to exist in your vagina and make it more difficult to prevent infections overall.

Both of these myths can be dropped in the "To Be Discarded" pile.

5. Having Sex In Water Prevents Pregnancy And STIs

While I accept that water is the most important substance on earth, let's be clear about two things it doesn't do: prevent pregnancy and prevent STIs.

This myth may have originated with the idea that you can't get pregnant if you have sex in a hot tub (side note: you can). No matter where it came from, though, it's a dangerous myth that water can prevent fertilization or infection. The reality is that having sex in water doesn't do anything for sexual health, except maybe make your condom more likely to break.

The internet makes it even easier for these dangerous "safe sex" myths to go around. That said, the internet also makes it easier for them to be debunked, so do yourself a favor and stop believing these awful, incorrect pieces of information.