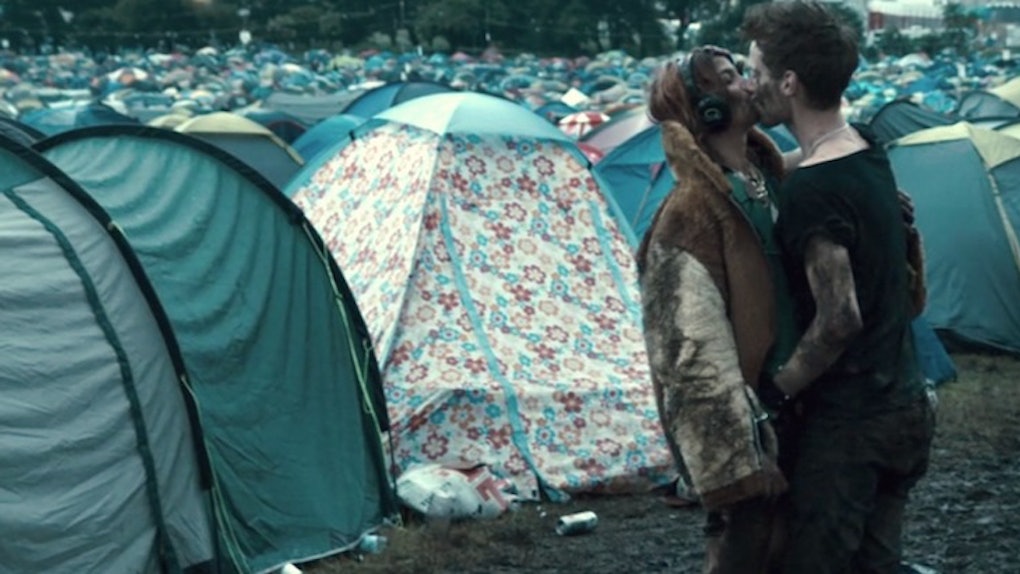 You have your Spotify playlist rockin' loud AF. You've already chugged a beer in the shower.

You have a cool outfit ready to go, and you keep checking your weather app to make sure you won't need to wear your rain boots.

You slide your festival bracelet on. You text the squad.

You can't wait to get the day started because you know it's going to be epic. It's going to be a day completely devoted to friends, open air, cold beers in watery cans, thousands upon thousands of people, a wicked lineup of artists you love, killer weather and the long-lasting memories that go hand in hand with the intoxicating rush that is a music festival.

When you're at a music festival, the energy is unlike anything you've ever experienced. There's no stress. “Real life” is away somewhere.

And in feeling so young and wild and free, a lot of your inhibitions get knocked down. And guess what that leaves room for? The titillating possibility of a festival hookup.

And it's so different meeting someone there compared to anywhere else. At the music festival, there's no pressure. No expectations. No bullshit or ulterior motives.

Everyone here is just as they are, and that's what makes them so crazy attractive.

At a music festival, the types of people to hook up with are kind of endless, and sometimes they go well beyond the realms of your usual attraction.

I mean, you're barely wearing any clothes. Embrace your sexuality, and have a little fun with the different possibilities.

Here are the five types of people you hook up with at a music festival:

It's all about the music for these die-hard fans. Whatever it takes, they will not miss out.

They'll navigate strategically through the relentless crowds, going from stage to stage, plotting their entire day around the set times of their must-see artists.

They love bands you've never heard of. They'll even travel across the country to see them play.

And they devote themselves to music blogs and magazines and online publications and record stores because it's what fills them. They probably play music, too.

And their wardrobe mainly consists of band t-shirts, ripped jeans and a lot of tattoos. I mean, of course it does. They'll never pretend to be anyone they're not.

The perk: Scenesters are the best kissers, as in ever. And they always choose the best playlists to perfectly set the mood.

He's probably high, drunk and laughing hysterically over nothing and dancing like crazy (and maybe even alone half the time), but he's having an absolute blast and doesn't give AF what anyone thinks about it.

He couldn't tell you more than three artists who are performing there, either. But that's not it for him. He's here for the vibe, like it's a dire thirst that's pulsing inside him.

Instead of rushing the stage like a maniac, he's chillin' toward the back with his little patch of grass where he can sprawl and dance in trippy circles with the sun and reapply his face paint and give high-fives to strangers.

And he's stoked about it.

The perk: Festival heads know exactly what they're doing in bed. And they know how to do it for a really long time.

Maybe it's for his blog or for his job. Maybe he's a photographer or a music journalist. Or maybe, he's just trying to get a zillion followers on Instagram and always chooses the most stellar hashtags.

But he's curious. He sees this whole festival not just as an experience that's wild and boozy and full of sweat, but as something way more dimensional than that.

He wants to capture the feeling that's electric there and alive there. So, when he sees that picture again — whether amplified in a dreamy filter or straight-up #nofilter — he can remember exactly the way it felt to be there again and get off on it.

The perk: Social media guys like to keep things interesting and different. Every. Single. Time.

I'm not saying “regular” like it's a bad thing. I don't mean vanilla or boring or cliched.

At a festival, sometimes there are just very normal dudes who aren't too much of any one type.

They're just there with their buds to have a good time. They like music. They like beer.

They're wearing a plain t-shirt and shorts and a backwards hat just 'cause that's what they like, and it's easy in the summer. They like to mix up their weekends.

They're laid-back. They don't like drama and the fluff of social media or fake, sugary girls.

They just want to have fun, meet new people and discover some new music in a different genre they don't usually go for. Why not? They're always up for anything.

The perk: “Regular” dudes know how to take control in the bedroom.

There's just something about a good old-fashioned hippie.

It's because they're so gentle and kind. There's this cool confidence they have, and they're mysterious. Like, you never really know what they're thinking, but you know it's something deep.

They love music, even if they don't know all the artists playing they still want to hear them. Because all music makes them feel something, which makes them see the world in a whole different light.

And if they happen to get split from their friends, it isn't a big deal. They like to be alone, and they're happy to be.

It allows them to pay attention to things, to think about things even deeper and to take in every moment as something new to love and appreciate.

The perk: Hippies are the most romantic lovers. They'll devote themselves entirely to your body like you've never been desired so hard in your whole life.

So there it is, festival lovers. Enjoy your life, enjoy the music and embrace the fact hot dudes are everywhere — if you just dare yourself to mix it up.