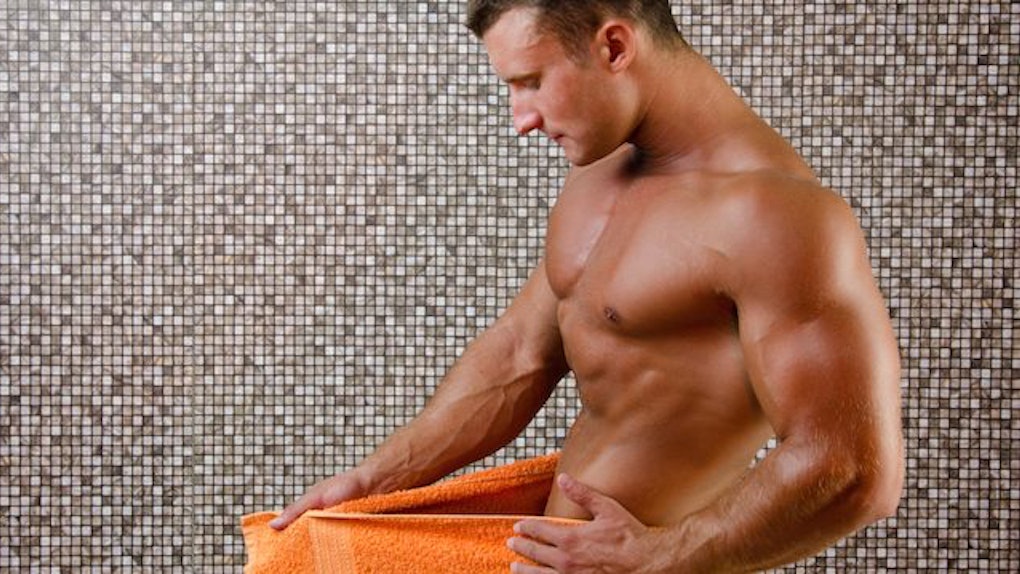 How To Deal With Friction Burn On Your Penis, According To An Expert

In her song about getting dicked so hard she can barely move, Ariana Grande already made it more than clear that it's possible for ladies to get sore from having sex.

(If you don't know what I'm talking about, it's her song "Side to Side." Here's her music video below.)

OK, WE GET IT, ARIANA. Girls get sore from sex.

But what about dudes?

We like to think of men as these hyper-sexual creatures who just want to bone all day every day, but the fact of the matter is there's such a thing as too much sex for them, too.

Apparently, men can actually get "friction burn" on their penises that can leave them in too much pain to maintain an erection for up to a week.

According to Dr. Alex Shteynshlyuger, MD, the director of urology at New York Urology Specialists, "friction burns or lacerations are fairly common in men from vigorous sexual activity."

But that's not all the info I'm giving you here. I talked to Dr. Shteynshlyuger, and he answered literally every question you could possibly have about friction burn on your penis:

What is friction burn?

Basically, if you notice a bunch of little cuts or even just some burning or pain on your penis, you might be dealing with friction burn.

We already know "vigorous sexual activity" is one common causes of friction burn, but Dr. Shteynshlyuger explains there's more than one cause.

Certain patients might have skin and medical conditions that predispose them to it.

Patients with certain skin and medical conditions can get this problem as well, as well as patients with a compromised immune system (for example, men with diabetes). Sometimes, they get a balanitis (inflammation or infection of foreskin), which causes a breakdown in skin. Fungal and bacterial infections can also make men predisposed to friction burn.

Uncircumcised men and men with diabetes also run a higher risk of getting friction burn:

In general, lacerations or friction burns are more common in uncircumcised men due to increased surface area for friction as well as skin that is more susceptible to laceration. Lacerations are also fairly common in men with diabetes.

But according to Dr. Shteynshlyuger, uncircumcised men can nip the problem in the bud with a quick circumcision procedure at the urologist's office:

When lacerations occur often, circumcision, which involves removal of the foreskin that is often affected by friction burns, is often curative. The procedure can be done under local anesthesia in under one hour.

Is there a chance it's actually an STD?

Dr. Shteynshlyuger warns that men should be careful, as friction burn symptoms can often be similar to those of syphilis. "So in general, it's recommended to get tested every year for all men — certainly if they've had multiple partners," he says.

How do you treat it?

The best thing you can do to treat your penis when it has a friction burn is to let it breathe.

According to Dr. Shteynshlyuger, "Usually they are minor and heal spontaneously without the need for any care other than a few days 'off' to let the area cool off."

However, if you're looking for some kind of medicine, Dr. Shteynshlyuger has some recommendations:

Usually, the less you put on the better. Certainly, if there's an infection, a topical antibiotic, like a triple antibiotic, [could help]. Just a simple petroleum jelly to keep it lubricated or moist is helpful — without too many chemicals in the medications.

Vaseline 100% Pure Petroleum Jelly (Pack of 3), $9, Amazon Oftentimes, the simpler, the better. And certainly keep the area clean, and give it a rest for a week or two.

How long does it take to heal?

If you're healthy and the cut is small, it should only take about a week to heal on its own. But depending on your medical history, like if you have diabetes, it could take weeks.

"If it doesn't heal in a week or so, it's probably a good idea to go see a urologist or primary care doctor to see if it's really just a cut, or if it's maybe a sexually transmitted disease, or if there's an underlying reason why it's not healing," Dr. Shteynshlyuger says.

Are you allowed to have sex while it's healing?

Dr. Shteynshlyuger encourages you to keep it in your pants while it's healing. "You have a laceration — a cut — and if you continue disturbing it, it will take longer to heal," he says.

But he goes on to explain that, for most men, they don't really have any choice but to leave it alone:

[Sexual activity] certainly could worsen it, but usually, it becomes fairly painful, and men stop having sex because they have to stop. And when you have pain, it's difficult to get an erection. Usually, the problem is self-limited to the extent that, once it gets painful to get erections, no one would enjoy sex too much.

At what point should you consider seeing a doctor?

If it's taking some time to heal, Dr. Shteynshlyuger urges you to talk to your doctor:

Certainly if it doesn't heal after a week or if it keeps happening. If it happens once every three years it's one thing, but if it happens two or three times within a few months, then you should probably see a urologist and get evaluated to see what the problem is and how to solve it. Unfortunately, some men suffer from these kinds of problems for years before they realize there's a treatment and a cure for this. Usually, this is usually treatable, and it can be treated very successfully.

Usually, this is usually treatable, and it can be treated very successfully.

How do you prevent it from happening in the first place?

Although he wants to stay away from giving "generic advice," Dr. Shteynshlyuger does cite using condoms as a pretty effective way to avoid friction burn:

It's very hard to give generic advice. Everyone's situation is different. We don't want to limit someone's sexual activity when they're not even susceptible to this problem. When this happens, it's a good time to see a urologist and figure out why it's happening and address it.

Aside from the uncircumcised men who run the risk of getting friction burn that we already mentioned, Dr. Shteynshlyuger provided us with a couple of other examples:

Some men have frenulum breve (a skin tag on the underneath of the penis that attaches foreskin to the glans). Again, if they use condoms and don't pull the foreskin back, it may not be a problem, but sometimes, when you stop using condoms, and your foreskin gets pulled back, [you] can have bleeding. Sometimes, vaginal dryness ... can predispose men to the problem as well.

From all of that, I would just say USE A CONDOM, SO YOU DON'T HAVE TO STRESS. And as far as the vaginal dryness goes, whip out some lube! It's really NBD.