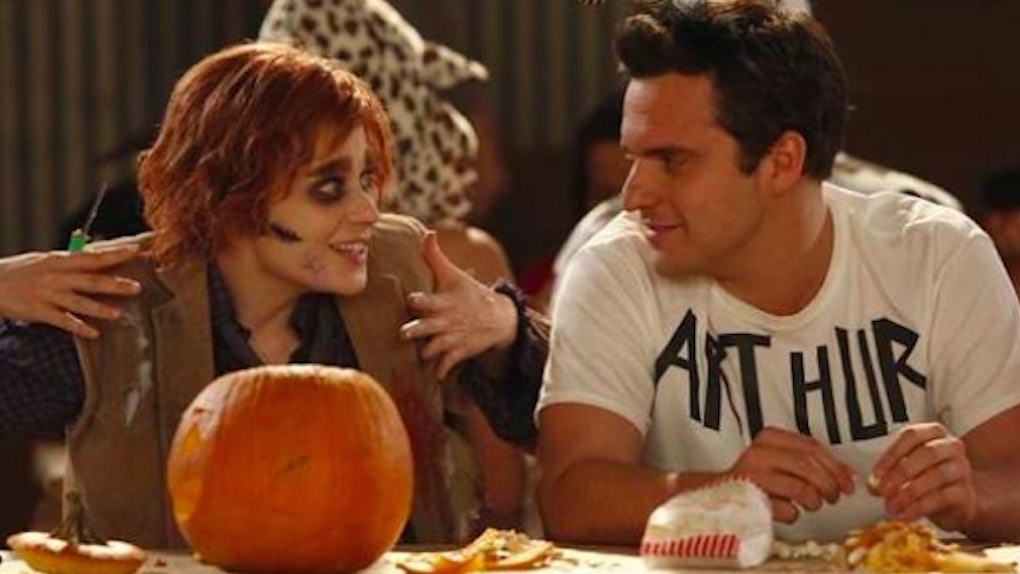 10 Convenient Places To Find A One-Night Stand On Halloween

I freaking LOVE Halloween, not just because I get to dress up like a Kardashian, (Kim is my go-to costume.) but because it's a great night to get laid.

Single people, this is your night. Yes, you will see couples in their annoying, matchy-matchy costumes all over the place, but you will also see a ton of single folks stumbling around, looking for love... or to get laid. You know, one or the other.

Halloween is the perfect (and one of the easiest) night to get laid. Think about it: Everyone is dressed up. Men are so ~mysterious~ hiding in their costumes, which only adds to their sex appeal.

Seriously, there's no better time to pick someone up, and then kick him to the curb because it's such a ratchet holiday. (Unless you want to keep him around after having sex with him, which is totally cool, too. One of my very own flings once started as a one-night stand.)

Here are all the places you can meet a guy to take home with you this Halloween:

Your BFF invited a crap ton of hot guys. It was mostly for you, though, because she's in a relationship and you're her whiny, single friend.

The pressure's on. Dress accordingly. When you see a guy pouring himself some jungle juice, walk over and pour yourself some, too. Then, talk him up and show him what ya mama gave ya.

Oh, and don't get too drunk at the pregame. You need to save some energy for when you get home. *winky face*

The Halloween store is LIT on Halloween — both literally, with spooky lights and shit like that, and figuratively, with a ton of hotties deciding whether or not they want to be hot or ugly on this fine occasion.

Pop into your local costume store. Who knows? Maybe you and a guy will reach for the same costume. It'd be love at first grab.

Ring your hot neighbor's doorbell. C'mon, you've literally been waiting for an excuse to talk to him.

Ask him for candy — no, like, candy, you feel me? If he really wants you, he'll know what you're talking about.

Just don't get too drunk and accidentally ring the doorbell of the wrong neighbor living on the left of you, who, incidentally, is 60 and bald.

...where everyone is bound to be wasted. Bars are great because there's always a nice selection of hopefuls to choose from.

If you're not into one guy, you can go over to another corner of the bar and find another guy. It's really that simple.

Also, I don't really need to give you instructions here on how to pick up a guy, do I? I'm assuming if you've made it this far — past the pregame and costly cab rides — then you know what you're doing.

March right up to the hottest guy you see (according to your beer goggles) and do your thang, girl.

My candy corn brings all the boys to the haunted house, and they're like, "It's better than yours."

All jokes aside, you should absolutely show up at a haunted house alone. That way, when you go for a ride around the haunted house and need a buddy, your chances of getting paired up with a guy are 50 percent.

And your chances of getting paired up with a hot guy are 25 percent. Those are still pretty decent odds.

6. In line at the candy store

Everyone is going to be in line at CVS, Duane Reade or Walgreens to restock on candy. It's your job to seize the moment while you seize some candy.

Pick up a seasonal candy, and strike up a casual conversation with the guy behind or in front of you with something like, "Woah! I didn't know there was such a thing as pumpkin-flavored Hershey's."

He'll hear you, you'll bond over your mutual love for all things pumpkin, and the rest will be history.

7. In line at the liquor store

There's an 86 percent chance every guy you meet at the liquor store is a solid 8 on a scale of 1 to "hammered" (I'm making all of these percentages up, by the way).

Basically, every guy in the liquor is DTF, including the cashiers.

Yeah, that's what I thought.

You're on your way to that random costume party later in the night. You know, your ex's cousin's best friend's twice-removed sister's party that you and this random guy at the bar just heard about. You decide to split a cab over.

You have no idea how you ended up in this situation, but who cares? You don't know this fellow passenger, but sitting in this private backseat is the perfect opportunity to get to know him a WHOLE lot better.

9. In the bathroom of that random costume party

I can practically guarantee a guy will be in the bathroom at any given point of the night either a) peeing, b) doing (or trying to do) drugs, or c) simply admiring his costumed greatness in the mirror.

Knock on the door and see who you find. The best part about picking someone up in a bathroom is, well, you don't have to move to have your one-night stand. You can get down and dirty right on the countertop.

Just clean up after yourselves, please and thank you.

10. The stoop of your apartment

If all else fails, when you get home, you might just find some single, lonely guy sitting on your stoop.

True story: Two years ago, I went to a costume party on Halloween. It was fun, but I didn't meet any guys there. When I arrived home, I saw a group of guys sitting on my stoop chatting. One of them was dressed like Johnny Depp. I was immediately sold; he was my guy for the night.

So don't give up if you haven't met anyone out. You need a hot ghoul to accompany your witch life, and he might just be right at your doorstep.