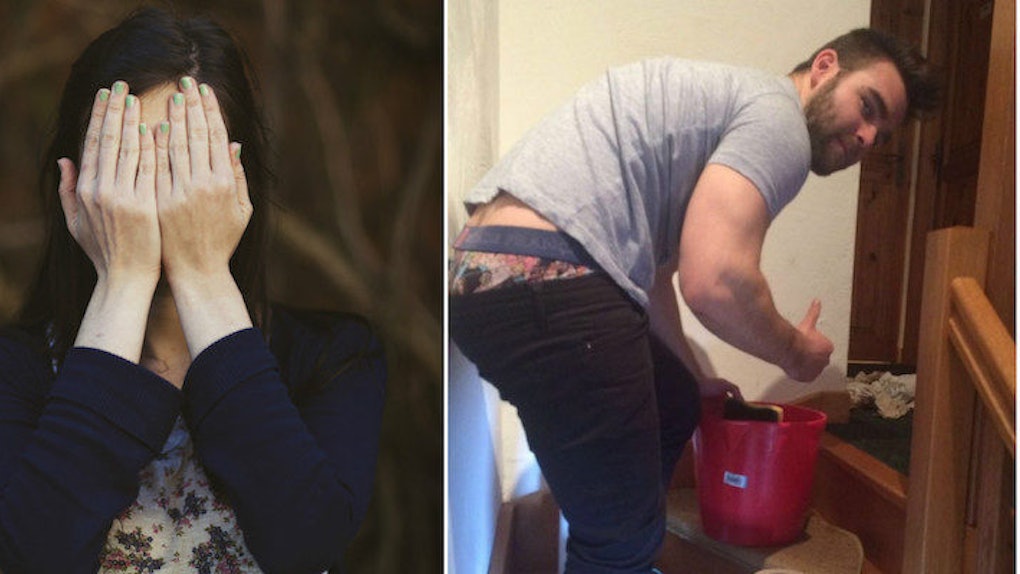 Obviously, you have a lot of questions. Mainly: How did the poo get everywhere, and why?

All will be answered. But first, you need context.

I take an annual skiing vacation in France with the boys, normally around March. This year, we went to Val Thorens in the Three Valleys, which has kind of been labeled Ibiza on ice (a massive party island in Spain, for all you American noobs).

It's a resort favorite of ours because it always provides on every level.

This year, however, it didn't just provide — there were more hilarious stories than there is turkey at Thanksgiving.

We were about three days into our week when I took a girl home from a nightclub. We'd met the previous night.

The friend I shared a room with gave up his bed for us and was sleeping on the couch downstairs (because he's a good lad).

We were way too drunk to do anything, and passed out.

I woke up to the sound of groans and drunken murmurs broken by short, sharp farts. It was coming from the hallway.

The girl wasn't lying next to me, so I put two and two together, assumed she was using the toilet and pretended I heard nothing.

I woke up again, not to ass noise, but to the most heinous odor ever. Had I pooed myself? Because that's what it smelled like.

It was around 4 am when I turned on the bedroom lights and saw the first sign I'd be getting no sleep that night: an unusually long, slim streak of brown by the door.

As I got closer to inspect the scene, I noticed one of my shirts was crumpled on floor sporting the same suspicious hue.

A sniff confirmed that it was, in fact, human feces.

And where was the girl!? She was still missing from my bed.

A sniff confirmed that it was, in fact, human feces.

I opened the bedroom door and stepped into the hallway — MY GOD HOW I WISH I'D JUST GONE BACK TO SLEEP — when the stench hit me like a firetruck.

I fumbled for the light switch in my haze.

A big puddle of liquid nightmare staring right at me.

She hadn't used the hallway toilet at all. In fact, she missed it by a good 10 yards. The poor girl must have thought the top step of the stairs was the toilet in her boozed-up state.

A big, puddle of liquid nightmare staring right at me.

Where was the girl!? Poo can wait, but an MIA human is a separate issue.

I hurdled over the giant cow pat (still feeling a light splash against my ankle upon landing) and went downstairs.

Yep, more poop. This time, even more runny. It looked like she'd splashed water from the kitchen sink and used the chalet staff's towel to wipe her behind.

Suddenly, I made out her figure on the couch.

She's safe. Curled up in the fetal position, naked and covered in poo from the waist down. Stripped of her pride, but alive. Thank God.

A moment of hilarity among this horror was seeing my friend passed out with his mouth wide open just inches away from her dirty behind.

After trying — and failing — to wake up several people, I came to the conclusion I had no choice but to clean it up myself.

I went into the chalet host's cleaning cupboard. No gloves. Cool. I wrapped up my hands in the thickest roll of paper towels, donned my ski goggles and mask and got to work.

It wasn't easy to scoop. And my God the details. I could literally see what she'd eaten over the past 24 hours (burger bun seeds and chili flakes).

The cleaning took hours, mainly because I was had to break off regularly because of the harrowing smell.

The chalet still hummed — it reeked of human waste and shame.

I scooped her up off the sofa (I was an expert at scooping by this point), carried her upstairs and herded her into the shower. I washed her like you'd wash a sick relative.

Then I toweled her down and put her back in bed. The door remained closed that morning while the quarantine process took place.

I awoke her and broke the news. She was devastated. Never have I seen such a broken woman. She told me,

If I never see you again for the rest of my life, that'll still be too soon.

Plot twist: I saw her again.

We found a potty in a cupboard and I sent her this photo with the caption,

FYI, this is how you poo.

She didn't find it funny.

A note to the girl who shat in (and around) my chalet:

Thank you. Thank you for allowing me to share this story with the world. You're a good sport. NAY, an inspiration.

I know you were plagued by embarrassment in the aftermath of PoopGate. But you quickly shrugged it off, and we laughed together. We still laugh together.

It is my hope your story will unite accidental crappers around the world and one day we can all join hands and declare, "You know what? It's OK to poop your pants."