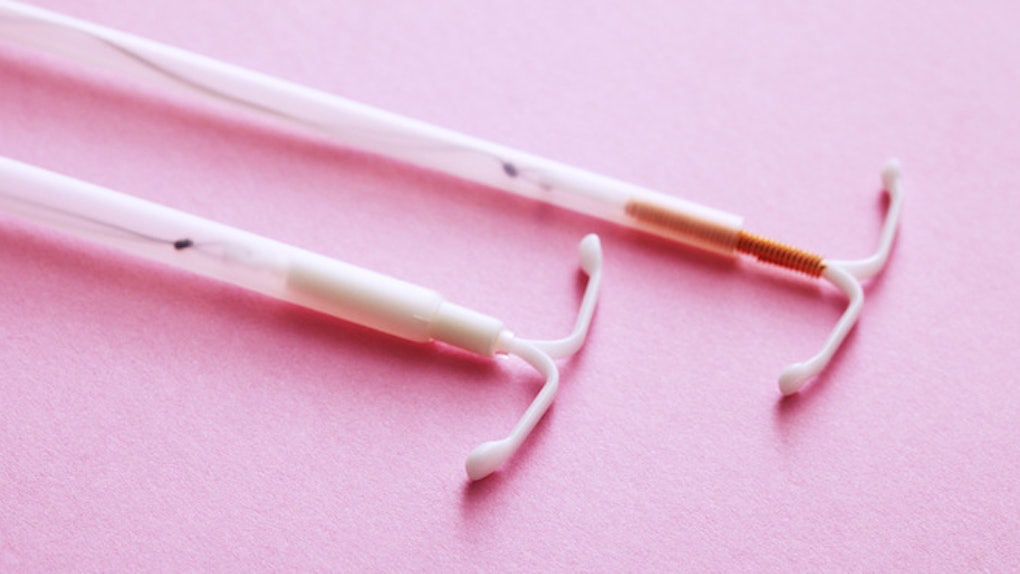 Should I Get An IUD? 5 Reasons I Love Mine

Search the internet about IUDs, and you'll find horror stories about depression and surgical removal alongside dreamy tales of zero periods and truly worry-free sex.

As a teenager, I wasn't allowed to go on the Pill by my doctor because of my mom's breast cancer. I also held on to my V-card until I was 18, so... it wasn't really necessary at the time.

In my twenties, I dealt with condoms and "oopsies" before finally accepting that the morning-after pill was not to be popped on a regular basis. So, three years ago, I delved into the land of IUD research.

As a pseudo-hypochondriac, I spiraled through all of the comments on forums before deciding what to do with my lady parts. WebMD would pretty much send me a "you up?" text at 12:02 AM, and down the rabbit hole I would go.

I was deciding between the non-hormonal copper IUD, which lasts for 10 years but can lead to heavier periods, or the plastic Mirena, which lasts five years and uses localized hormones.

I settled on the Mirena after speaking to my equally paranoid doctor. There's no estrogen in the Mirena, so the small dose of hormones was fine by her.

I got that baby inserted in order to not worry about having real babies, and two and a half years in, I still love it. It's not perfect, but here's why my IUD works for me:

Every year that I get older, my brain develops more mush-like tendencies. Why did I just open the refrigerator again? I don't know, but sure, I'll have that piece of cheese.

I was never on the Pill, but I imagine it would have been a disaster. I am pretty terrible at remembering things. Even if I set an alarm on my phone, it's quite likely I would forget my cute pink case at home.

And if I forgot to take my birth control? Oh, I would freak out, spiral out, and probably ingest the morning-after pill as not to be paranoid until my next period.

This IUD is not coming out of my uterus without some serious effort, so I'm pretty solid on the no accidental pregnancy thing.

2. I Haven't Had Crazy Hormonal Side Effects

I get paranoid about putting hormones throughout my body.

I'm even a little bit of an authoritarian when it comes to hangovers and headaches - do you really need that Advil, Kimmy?

I do not mean to pass any judgement on anyone who takes the Pill, or any pills, for that matter. I'm just in my head when it comes to putting things in my body. (Which, by the way, is LOL, because I inhale tacos and margaritas sans fear.)

While some people have reported depression side effects from Mirena, I have not experienced these effects. Yes, there are some new hormones local to my uterus, but I still feel like my normal self, and as much as I self-deprecate, it's good to feel like myself.

At first glance, an IUD's price tag may look steep: They can run as high as $932. Luckily, most insurance policies cover IUDs, even Medicaid, and many plans under the Affordable Care Act.

Even if you were to pay full price for the Mirena, over five years the maximum cost per month would be just $14. I won't be annoying and convert $14 into pumpkin spice lattes, but if you do end up paying full price, it's a pretty good deal.

I was completely covered under insurance, and it feels good to know that I won't have to worry about paying for birth control again for five years.

While many other birth control options are covered under insurance, with all of these changes to healthcare in the U.S., I'm very glad I'm not paying month-to-month to keep my uterus on lockdown.

4. I Don't Have To Pull It Out In Public

I mean... that visual is a little extra, but in all seriousness, an IUD is a very personal and secretive form of birth control.

There's no asking for water to take a pill at dinner, or no awkward moments during a meeting that has you getting up to take your pill on time. Plus, most men say they can't feel an IUD during sex.

And if he can feel it? It's not actually poking or hurting him, it's just the strings.

If you are down with a doctor sticking a tiny piece of plastic (or copper) up your uterus, your man can deal with a little weirdness.

Pre-birth control, my periods were painful and heavy. With Mirena, I only get a light period a few times a year. I had some consistent spotting the first few months, but nothing tampon-worthy.

I no longer freak out about cotton strings peeking through when I get out of the ocean. I no longer feel ashamed when I can't get out of bed because of cramps, and to be honest, it's nice not to pay for tampons every month.

All of that said, the insertion of an IUD does have the potential to be painful. My pain was probably a six on a scale of 10. I had short and sudden stomach cramps during the first few months, which I termed "IUD pains," but they eventually subsided. The copper IUD can make periods more painful and heavy, which is pretty much the only reason I didn't go for it.

The night Trump was elected into office, my only post on social media was "Should've gotten the copper IUD." (I'll need a new Mirena before his term is up, and don't know if I'll still be able to afford it.)

I'd take the painful periods back to stay in control of my bod and it's reproductive features.

Even with my favorings for all things IUD, everybody is different. It's best to talk to your doctor, your friends, or any lady you trust to decide what type of birth control is best for you.