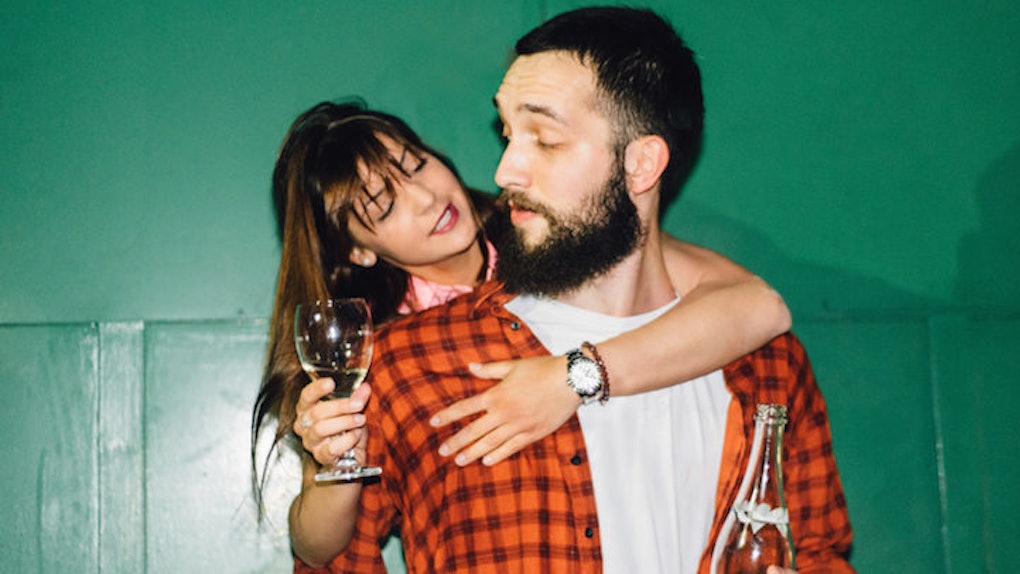 Young love is such a pure source of happiness. Often, we find no other relationship compares. As we get older, we realize life is a lot more complicated than kissing after ice cream dates when we were 15.

The times change, we change and things around us become more difficult to deal with.

In this day and age, you have to work as a team to maintain a long-lasting relationship. The problem is that Generation-Y wants instant gratification, a partnership without communication and intimacy without vulnerability.

In the everlasting fight between head and heart, we seek out ways to find a balance between emotional security and self-preservation.

Alcohol seems to be the go-to defense for emotions of Generation-Y, but it also seems to act as an antithesis for good behavior. It creates a quagmire of blacked-out truths and unexplained tension.

When we only focus on protecting ourselves, we cheat our partners out of true love.

We aren't competing with a person as the third party in a relationship; we're fighting against alcohol.

1. The First Time You Two Spoke You Were Not Alone

You can’t remember if you were too shy, or how long it’s been since you last spoke. But, his Instagram selfie was looking pretty good, so you decided to like his picture (and maybe also a few from 39 weeks ago).

He direct messages you the next day, and the two of you exchange numbers. Now, it’s a waiting game as to who will text first. The thing is, though, you weren’t alone. You had some Jack Daniel's in you.

You’re at the bar with your best friend, and you’re flirting with the bartender. He says the first round is on him.

She tells you it’s time to let go of your ex, Joe Shmoe, and you tell her about what you did on Instagram. After the last guy you dated, she supports the idea of a new man and encourages you text him.

You’re not sure. Together, you throw back another shot. You feel it in your head, your ears and all the way down to your fingertips — the ones that pick up your phone and text him.

It’s 1:30 in the morning, and you’ve been training for a marathon early every day. Okay, let’s be honest: It’s only a 5k. You’re trying to sleep because you know your alarm's going off at 6 am. But then you see your phone light up.

Come meet us at the bar!

You flip the screen over and go back to sleep. You’re not in the mood for drunken texts.

That new place downtown just opened, and everyone’s there (and so is the guy you’ve been playing cat and mouse with for the past couple of weeks).

You’re barely there an hour, and he asks you to dance. He has a beer mug in hand and confidence smeared across his face. You, however, are still too sober.

The occasional back and forth texting just isn’t going anywhere, so you cave. Finally, you two agree to break the ice and go out for drinks. What better way than over a tall glass of red?

You check off the usual topics of conversation. But by the end of the bottle, you’re talking about your first heartbreak, and he’s telling you he’s wanted to kiss you since 2011.

You cap off the night with one more drink, and a kiss that’s been anticipated for way too long.

You’ve now escalated to hanging out with each other’s friends, and everyone is pregaming before the club. Bottles are being passed around, drinks are being mixed and from the outside looking in, you two seem quite smitten.

The dance floor seems to be the place to tease, and around 3 am, when your friends want to leave, you respectfully decline. You know who you’re ready to go home with.

In a drunken haze, pants are thrown and a bra is struggling to be freed. You run your fingers over his chest, and he tries to find your lips in the dark. You aren't so nervous anymore, as your toes curl.

You both collapse, and you fall into a very sound sleep.

The alcohol intake isn’t as high as it used to be, but you two still love to party (even if partying means drinking a generous amount of homemade sangria in your living room on a Sunday night).

He takes a gulp from his glass without taking his eyes off you, and he asks why your eyes look so glassy. It can’t be the alcohol. In fact, you know it’s not.

Your heart feels like it can conquer anything right now. You’re both laughing about things that don’t make sense, slurring words along the way. You lean over to fill his glass, and then he spills it.

The sun rises, and you’re ready for pillow talk. He rolls over and laughs.

You begin to question if you can, either.

Six months in, and it’s everything you want it to be.

Sure, he’s mad you blacked out the other night, forcing him to pick your drunken mess up. Yeah, you were pissed the night he forgot to call you after going out with the guys.

But these are just small things, you tell yourself. You begin to make excuses. Resentment starts to build. Neither one of you cave.

You sit next to each other, disgruntled and bored. The weekend wiped out both your bank accounts.

Once again, your bank accounts are revived along with your livers, and your friends are begging you both to join them at the club. You show up first and send him a cross text. He’s late.

Normally it doesn’t bother you, but you decide now is the time to say something. Feeling much less hesitant, you press “send” as you sip the martini some man at other the end of the bar bought you.

Your man was already out with his work friends, but he takes a cab to meet you. He’s drunk. You taste it all over his lips when you kiss him.

You’re also drunk, and it seems you two have a lot to discuss. Suddenly, you’re crying because you “just can’t get over how...” and he’s screaming at you “for those times you...”

This is just too much to handle. You walk away and head right back to the bar. You turn and see him pound down a Jack and Coke.

Cheap shots are given, and cheap shots are taken. The slurring, screaming and crying continues. Beer mugs end up broken on the floor, and the DJ’s music seems to be mocking you two.

The last thing you remember is your best friend dragging you outside. When you wake up, you’re alone and sober.

10. Bottom Of The Bottle

Time has passed, but not to you. Weeks have gone by, and the only thing you feel is heartache. Other times, you're just numb. Wine has become a staple in your diet, especially for nights of wallowing.

After a night of boozing, you go home alone again. With liquid courage, you pick up your phone. There’s no stopping you now.

Who cares if you seem pathetic or sad? You stumble into bed and send him a text.

For the first time in a while, he says he misses you, too. You ask him what he’s doing. He responds: