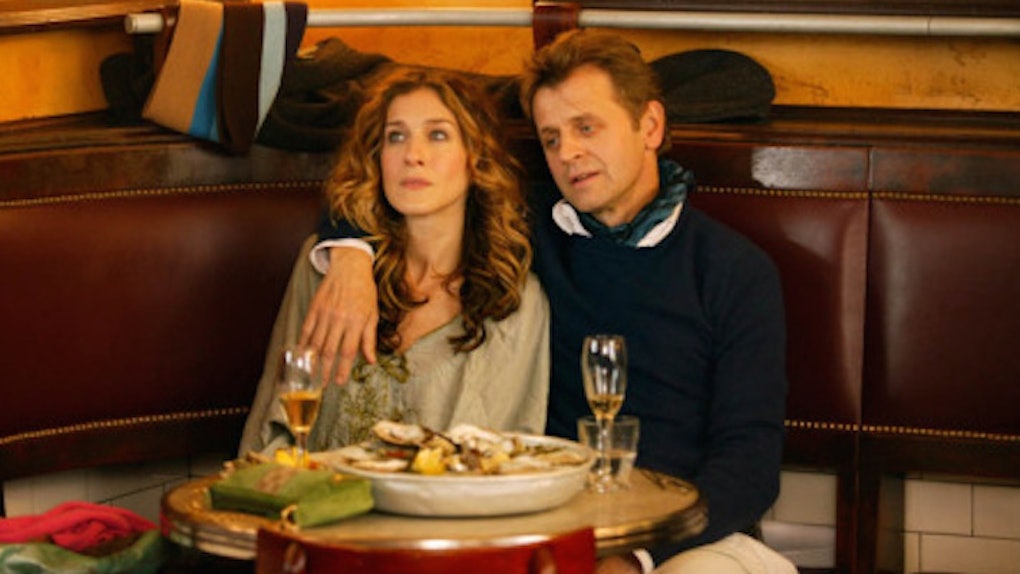 5 Red Flags That Your SO Is Trying To 'Tame' You

I realized a long time ago that I'm not interested in being tamed by a partner.

I'm fucking wild, and I like living my life that way.

I'm not black-out-drinking-self-destructive wild (anymore). I'm healthy wild. Like, I'm addicted to pouring my heart out on the internet, and I physically can't tell a lie even if it means making an awkward situation less awkward.

I feel big feelings, I'm expressive and I suffer from acute "delusions of grandeur." I recklessly spend money, I like to use delicate words like "fuck" and "pussy" (in a sophisticated way, of course) and I like to stay out really late drinking shitty champagne in drag bars.

Everything I own is loud. My necklaces clank together when I walk. The chains on my boots make dinging sounds as they rub against each other. The heavy heels bang loudly against the ground. People often think a dog is running behind them, only to realize it's just Zara and her loud AF jewelry.

People I've dated are initially drawn to me for these exact reasons. They like the mess. The mess is fun. The mess has a shit ton of soul. The mess is what drives me to love them harder than they've ever been loved before in their entire lives.

But eventually, they start to resent the mess. They want to clean that shit up and tame me like a zoo animal.

I've been in a lot of relationships at this stage in the game, and I can see the shiny red flags from a mile away now. And when I see warning signs that some bitch is trying to tame me, I run like the god damn wind.

When I see warning signs that some bitch is trying to tame me, I run like the god damn wind.

"Tame," after all, is just a fancy way of saying, "I WANT TO STEAL YOUR LIGHT and keep it for myself."

So, here are the official warning signs someone is trying to tame you:

1. They shame you for being the life of the party.

Look, if you're blacking out every night, that's one thing. But if you're just the life of the party, the clown that makes everyone laugh, the glitter, the glamour, the scandal or the babe of the evening, you should be celebrated, not shamed.

I always know someone is trying to change me when they say things like, "Why do you have to talk to everyone all the time, Zara?" or, "Why do you need so much attention at the party? Why aren't I ENOUGH?"

Because some women just radiate a certain energy and light that intoxicates a room, and to dull that down because your SO is threatened by its palpable power is a SIN.

2. They passive aggressively glorify other women.

"You know Kate cooks dinner for Ryan every single night? Isn't that sweet?" they'll say, their tone super condescending as they glare at you blissfully eating peanut butter straight out of the jar.

They say this as a subtle way to imply Kate is domesticated and a better partner, and you're a stupid child eating peanut butter.

But you know what I say? I'm not Kate, asshole.

Kate might cook dinner, but Kate has no personality, Kate has no spirit and Kate wouldn't drop everything for Ryan the moment he's having an emotional breakdown in the middle of the work day.

If you want Kate, date Kate. Because I'll never be Kate. I'm Zara Barrie, bitch. And Kate can't get down and dirty like Zara can.

3. They encourage you to listen to different music.

Nothing is as visceral as music. We like the music we like because it speaks to us on a deep level, and it knocks us out of our intellect and connects us to our hearts.

Which is why people who want to "tame" others are threatened by a woman's love of her precious music. They will swoop in and undermine your taste.

"Why don't you listen to the greats of the '60s?" "Why do you love Taylor Swift? She's such a bimbo," they'll say, polishing off their annoying, pretentious "records."

Look, I love Taylor Swift. She gets me, and I get her.

You're just trying to control my mind by getting me to listen to music that fits your life's agenda. And it's not going to happen, honey.

If you don't respect my taste in music, you're not respecting my most raw feelings.

4. They manipulate you with their families.

"Well, you know, Zara, my family is REALLY conservative, so don't, uh, you know, be yourself."

Look, we're all polite women. We know how to behave. But we also can read between the lines, sugar. When you say this, we know you're saying "If you want to be part of my family, you need to tone yourself down."

Instead of being proud of our eccentricities and unique style, you want us to white wash it and you're using your family as a tool in your ploy.

I've been around the block 30 times now, and I've never met a mom who didn't like me. It was always the person using their fabulous mom as a threat to force me into changing my identity.

And it doesn't work.

We know you're saying 'If you want to be part of my family, you need to tone yourself down.'

5. They shame your sexuality.

Kittens, this is honestly one of the most heartbreaking things a human being can do to another human being. And I see it all the time, sadly.

Just the other day, my friend told me her boyfriend doesn't want her to talk about sex in her stand-up anymore. She's a wildly sexual stand-up comedian, and her sexuality is a huge part of her entire identity.

He made her feel ashamed for being open about sex in her routine, telling her it was "cheap."

It's happened to me, too. I had an ex who got mad at me when I told her I was turned on and wanted to sext. She tried to make me feel like I was some dirty, little sleaze because I wanted to SEXT.

And never look back.

People who want to 'tame' know your sexuality is such a powerful part of who you are.

So, kittens, if any of these five red flags are appearing in your new relationship, message me. Because you clicked into this article, and I feel responsible for you now.

I wasted too much of my life with assholes who tried to tame me, and I'll never get that time back. I don't want that for you.

You're so gorgeous and powerful just the way you are. Find someone who will add to your beautiful mess, not try and clean it up.

Because clean floors are nice, but clean, stale people are boring. And you're not boring. Don't let them make you boring.