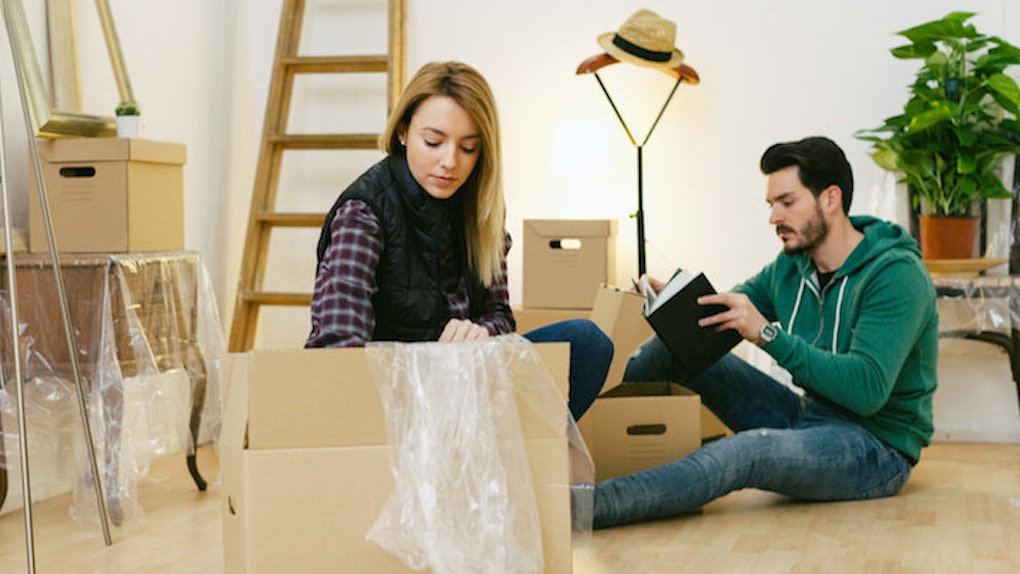 Everything You Should Expect When Moving In With Your Boyfriend

Moving in with your boyfriend is a colossal step in any relationship.

It’s the first time you’re truly morphing both your lives under one roof, with no escape.

I’ve been living with my boyfriend for three years now, and I thought I’d share some insight on the reality of what it’s like to live with the man you love.

Ladies, if you’re about to move in with your man, let me begin by saying it entails more than just picking decorative bathroom towels and finding block letters of your initials.

Sure, both of those things are imperative, but you also have to learn how to hold in your farts for an extended period of time.

(Don’t worry, it’s just a temporary requirement until he realizes breaking the lease will cost much more than breaking up with you.)

What I’m trying to say is, worry less about which floor lamp you’re going to buy and more about the fact you’re about to share a home with someone who has testicles.

Just like anything else, living with your boyfriend has its pros and cons. I’ve listed them below so you know what you’re getting yourself into.

Pro: He'll be your live-in handyman.

Assuming your boyfriend has two hands and isn’t a complete moron, you’ll never have to worry about calling someone to hang a picture or repair the toilet.

The best part is, fixing things makes men feel worthy and heroic, so really you’re just being a caring girlfriend.

Con: It's gonna get hairy.

I’m not going to feed you bullsh*t and pretend I don’t shed -- I’ve been known to clog some drains in my day (from the hair on my HEAD) -- but nothing compares to male hair grooming.

At least once a week, my poor sink looks like a porcupine.

The question always remains: Is it from his face or his balls? I guess some things are best left undiscovered.

Pro: He'll be your bedtime bodyguard.

My boyfriend sleeps closest to the door; this way, if we have an intruder, he can fight the person off while I escape through the window.

I’m obsessed with Bravo. I enjoy watching thoughtless, mind-numbing reality television after a long day at work -- that’s how I unwind.

When my boyfriend comes home and sees I’m on the couch watching "Real Housewives," he acts as if I’m an unemployed crackhead.

He’ll be like, “Your girl Teresa is trash.” I'm like, first of all, this is "Real Housewives of Beverly Hills" and second of all, Teresa has been incarcerated for six months -- have some respect!

Also, Andy Cohen owns my soul, so I couldn’t stop watching even if I wanted to.

Pro: He'll be the Chairman of Chores.

But when your roommate is your boyfriend, you can (graciously) ask him to put the dishes away, take out the trash and even air dry your thongs!

Con: His fingerprints will be all over your top-shelf toiletries.

Men are lazy. Let me elaborate: When your boyfriend runs out of his body wash, he is going to use your $28 Bliss Body Butter Scrub.

Oh, and it doesn’t end there. Girls, if you buy fancy, expensive shampoo, tell him it will turn his hair blonde if he keeps using it. Works like a charm.

I apologize in advance if this article has made you reconsider moving in with your man. Living with anyone is difficult because we’re all undeniably strange creatures with even stranger habits.

The key to successfully living with your other half is being able to accept all the weird sh*t he or she does behind closed doors and still love that person unconditionally.

If you can do that, chances are, you could probably spend the rest of your lives together.

DISCLAIMER, LADIES: Freely pooping is crucial if this is going to work. And by “freely,” I mean in the toilet... not all over the apartment.